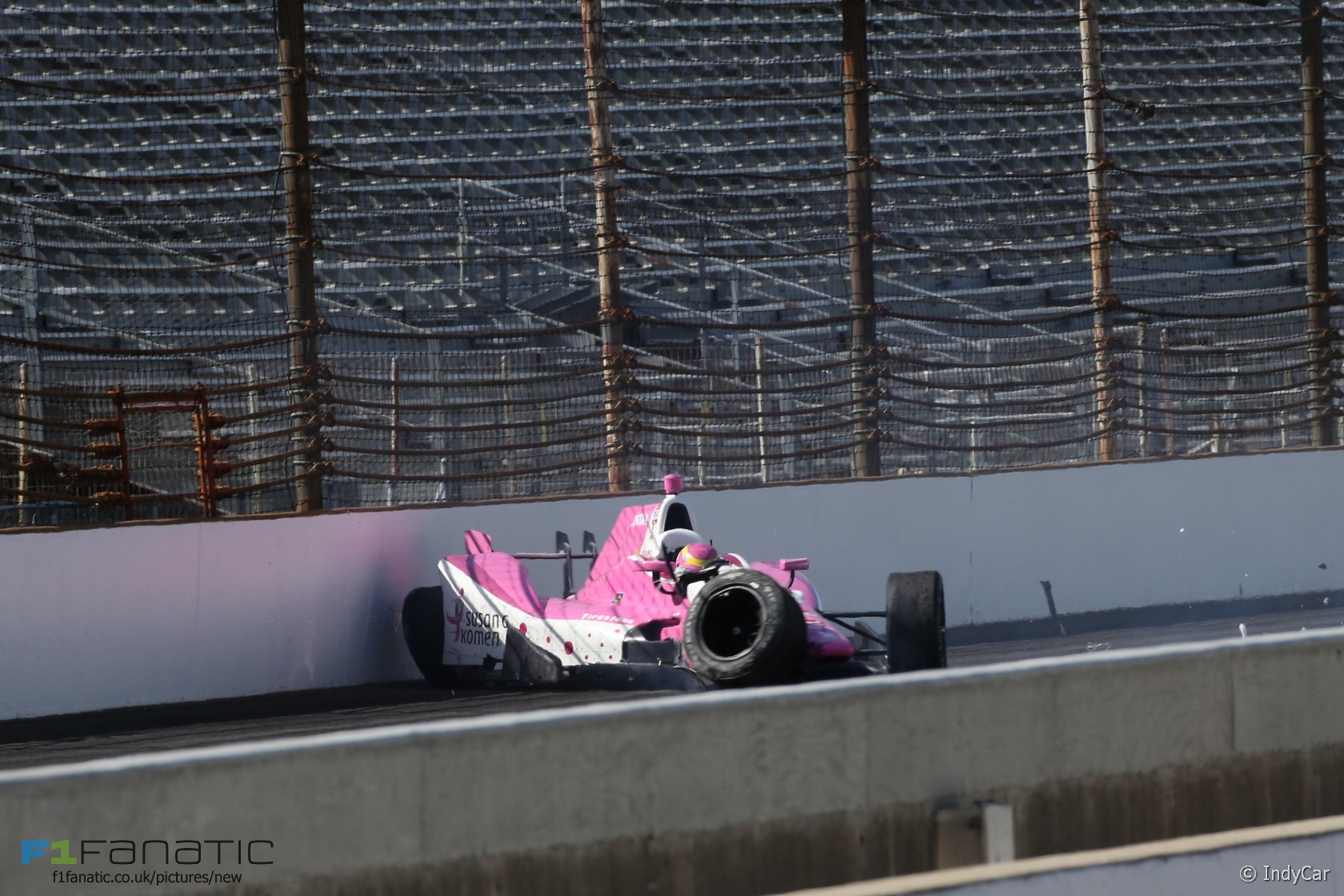 IndyCar’s new aero kits had been a divisive subject long before the championship arrived at Indianapolis for its sixth round and most famous race.

But a pair of crashes in practice have raised urgent questions about the safety of the cars. Helio Castroneves and Josef Newgarden were fortunate to escape injury in separate, solo accidents in which their cars took off and flipped after making contact with the barrier.

In practice speeds were already approaching the level seen last year, when Ed Carpenter took pole position at an average of 371.866kph (231.067mph). Greater performance was expected this year as teams are allowed to run new aerodynamic kits produced for engine manufacturers Chevrolet and Honda.

After five races using the road and street course versions the jury was still out over whether they represented an improvement. The first race in St. Petersburg saw a spate of debris-related caution period after parts broke off the new wings. Since then some components have been strengthened, others removed, and the on-track action as generally improved – especially at Barber Motorsport Park, where Newgarden scored his breakthrough victory in a cracker of a race.

Indianapolis is the first test for the superspeedway versions of the aero kits. As one of the three great races of motor racing along with the Monaco Grand Prix (held earlier on the same day) and Le Mans 24 Hours, the Indy 500 had for too long been a race contested by identical cars.

The return of aerodynamic competition this years follows the revival of engine development three years ago. IndyCar had set a target of seeing Arie Luyendyk’s 19-year-old record qualifying lap speed fall by next year, the 100th running of the race. Luyendyk set a single-lap record of 382.216kph (237.498mph) and record qualifying four-lap qualifying run of 381.398kph (236.986mph).

But the pursuit of performance has always come with a safety risk and the first sign IndyCar might have a problem on its hands came when Helio Castroneves spun his Penske into the wall on Wednesday and the car took off.

The solo crash for the number three Penske showed that despite changes to the floor of the cars enforced by IndyCar, aerial accidents are still possible. A second crash involving Josef Newgarden on Thursday in which his car also flipped will surely increase calls for this to be examined again.

Having emerged unscathed from his crash, three-times winner Castroneves and the other three members of Penske’s stellar line-up are strong contenders for victory in the first oval race of the year. On the road and street courses which held the first five rounds of the championship, Chevrolet’s engine and aerodynamics was the package to beat. Honda only managed to inflict a defeat on its rival once, in the rain-hit race at NOLA Motorsport Park in Louisiana. At Indianapolis teams are using the superspeedway versions of their aerodynamic kits for the first time. While Chevrolet appear to still have an edge on one-lap performance, that is a small part of the game in a race which lasts 200 laps. If Honda can eke out better fuel mileage their drivers will be very much in contention.

Since Chevrolet’s entry in 2012 their Japanese rivals have taken two wins to the Bowtie’s one in the Indianapolis 500. Chevrolet may have enjoyed more championship success, but it’s this race which really grabs the interest of the American public.

Nonetheless, arriving at the sixth round of the championship it is Chevrolet drivers who occupy the top four positions. Juan Pablo Montoya leads reigning champion Will Power by five points. Ganassi’s Scott Dixon and Tony Kanaan are well up in the points as well and also part of the Chevrolet vanguard.

But the one to watch could be a man who hasn’t started a single race so far this year. Ed Carpenter is only starting the oval races in his own car, Luca Filippi has been on duty for the road and street courses. But Carpenter has put his Chevrolet-powered car on pole for the last two years at the circuit which is just a few blocks from Butler University, where he studied.

For those in the UK the Indianapolis 500 will be broadcast live on BT Sport. The race starts at 5pm BST.

As with every round of the IndyCar championship we’ll be following all the action on F1 Fanatic Live as well.

Who’s your tip for victory in this year’s Indianapolis 500? Have your say in the comments.

35 comments on “Crashes a concern as speeds rise at Indianapolis”