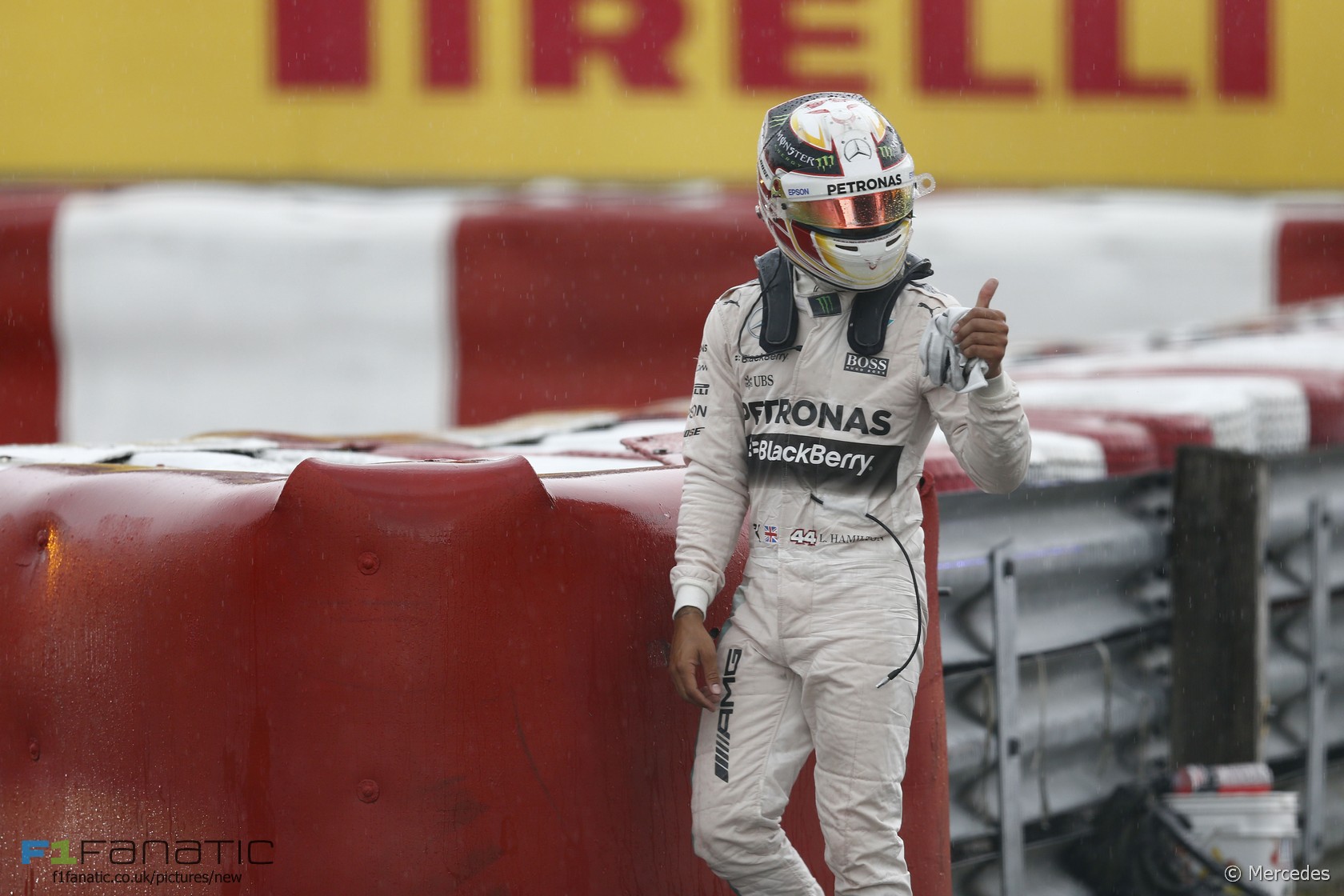 Lewis Hamilton was quickest in second practice but also suffered a setback when he crashed after a rain shower hit the track.

led a second practice session which was interrupted by heavy rain and a red flag – which was caused by him crashing during the downpour.

Mercedes had sent both their drivers onto the track on intermediate tyres despite the rain falling hard. Soon after the cars left the garage the race engineers were debating with their drivers whether they should switch to full wet weather tyres – also known as ‘extreme’ wets.

As Hamilton drove through the first two sectors his race engineer Pete Bonnington asked him “let us know if you think it’s X-wet [extreme wet] conditions – it looks wet out there.”

“So Lewis we think it’s X-wet conditions,” he added moments later. But it was too late to keep Hamilton from skidding off at the turn ten hairpin and into the barrier. The driver gave a one-word explanation on the radio: “Aquaplaned.”

Meanwhile Rosberg’s crew had already taken the decision to abandon the intermediate tyre run. “If you think it’s too dangerous then you can box,” said Tony Ross on the radio after Rosberg joined the track. “Just box, box, we’ll stop,” Ross added, then after Hamilton crashed he warned Rosberg urgently: “Caution, caution turn ten, Lewis has gone straight on. Brake early.”

Mercedes’ surprising decision to send either of their cars out at all in heavy rain – let alone on the shallow-grooved intermediate tyres – comes in the wake of the strategy error at Monaco which cost Hamilton a likely victory. However he will take come comfort from having headed the practice times for the second session in a row.

The rain which arrived shortly before the halfway point in the session was widely anticipated by the teams, and to a man they had their drivers out early to make sure they got their super-soft tyre run finished.

Hamilton abandoned one of his first runs on the softer rubber after hitting the kerbs hard at the final chicane. His best effort eventually put him three-tenths of a second clear of the two Ferraris – Sebastian Vettel leading Kimi Raikkonen by a mere six-thousandths of a second.

Rosberg was fourth while for the second session in a row Lotus was the quickest Mercedes customer team, this time thanks to fifth-placed Pastor Maldonado.

29 comments on “Hamilton quickest again – then crashes in the rain”