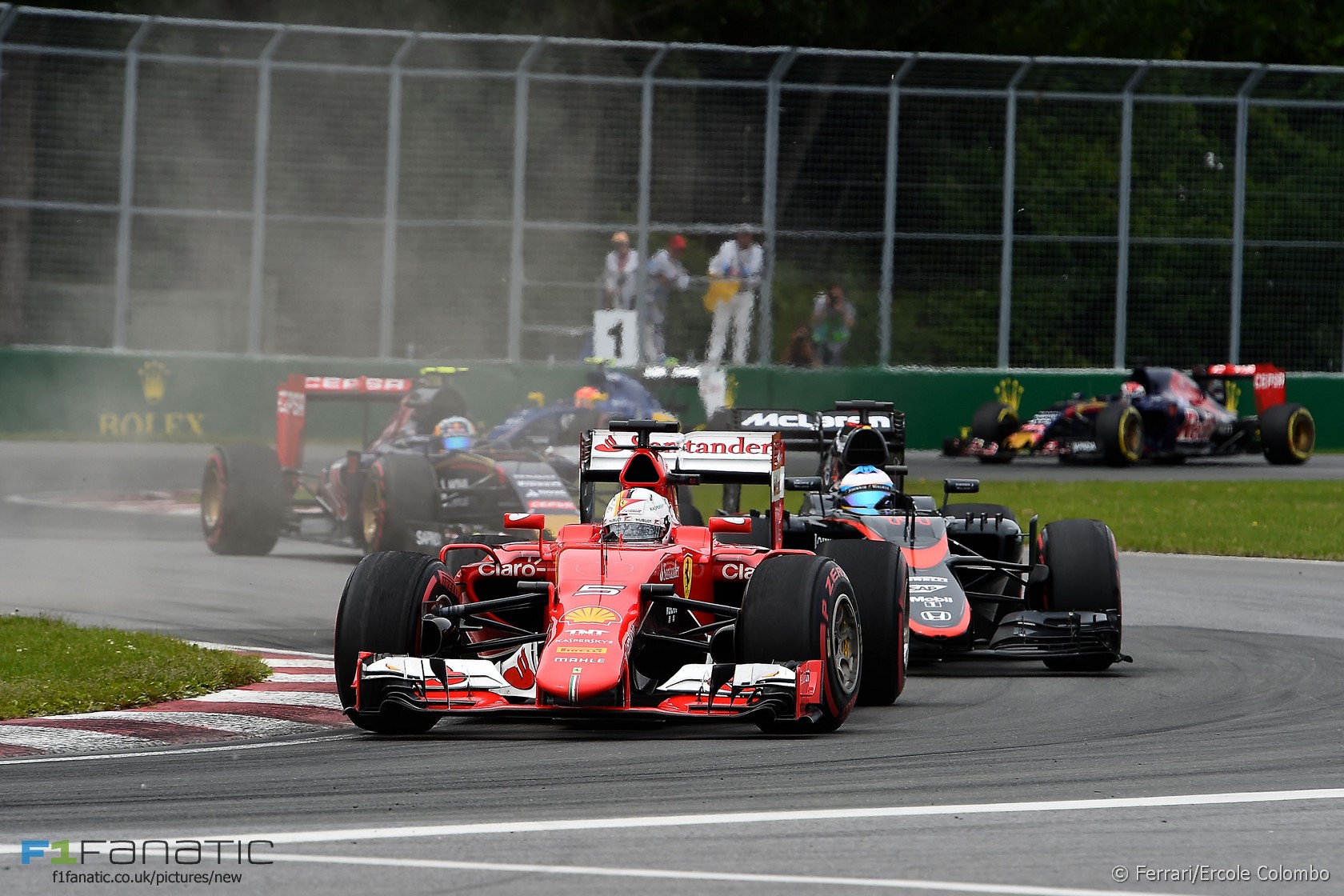 Sebastian Vettel was voted Driver of the Weekend for the second time this year after fighting from eighteenth to fifth in the Canadian Grand Prix.

Vettel started 15 places behind the other Ferrari at the Circuit Gilles Villeneuve but ended the race trying to catch Kimi Raikkonen for fourth position.

The Williams drivers also figured highly in your ratings – as did race winner Lewis Hamilton. While still being some way off on one-lap pace, free practice showed Ferrari could match – if not better – the Mercedes’ cars on race pace, and this set up the promise of a scrap for the race win.

However, while the weekend was initially looking promising for Vettel and Ferrari, a power unit problem sent him out of qualifying in Q1 in 16th place, and dashed all hopes of someone mixing it with the Mercedes’. He was further demoted by a grid penalty for overtaking under red flags during practice, leaving him 18th on the grid.

By his own admission Vettel had a steady opening lap, but from then on he made good progress. The race threw up several obstacles: his first pit stop was slow, Fernando Alonso proved an especially resilient rival, and Nico Hulkenberg spun as Vettel went toe-to-toe with him at the chicane.

Vettel took the chequered flag just over four seconds behind team mate Raikkonen, who started third. His efforts led 41.6% of you to pick him as Driver of the Weekend for the second time this year, following on from his Malaysian Grand Prix victory.

Such a brilliant racer, a couple of moves were a bit rash but that’s because he is just that, an out and out racer!
@psynrg

Great recovery despite all the misfortune he had all weekend. Great pace overall compared to his teammate, aggressive and determined driving.
@sven-d

A lot of things went wrong for him pre-race – technical glitch that put paid to his qualification in Q1; the 5-place grid penalty to boot; a questionably timed first pit stop that went badly wrong; losing further time in the fracas with Alonso. despite all that he overtook several cars, many of them twice and was actually gaining on his teammate when he ran out of laps. To finish 5th under those circumstances was excellent.
@loup-garou

However, a number of voters felt his red flag error was too serious to overlook.

It’s difficult because most drivers did what was expected, no more. I can’t vote for Vettel only because of his red flag incident – very clumsy.
@chrischrill

It’s the reason I didn’t vote for Vettel. It was a very basic mistake to make and almost arrogant to think the red flag didn’t apply to equally to him as the Manor he overtook. I’m generally a van of Vettel and no doubt over the course of the race he did a great job, but for blatantly and intentionally breaking one of the most fundamental rules (and as a result getting a deserved punishment which may have adversely impacted his race result) I couldn’t put him as my Driver of the Weekend.
@jerseyf1

Winners and losers in the Canadian Grand Prix Race winner Hamilton received less than half as many votes as Vettel despite also taking pole position and seeming to have team mate Nico Rosberg comfortably handled. Many felt he had things too easy in Canada.

Hamilton should be discounted because Mercedes’ cars are just so good. I don’t think anyone would argue with the fact that it’s easier for any driver to win when you have a clearly superior car.
@smartrip

The Williams drivers were also highly-rated in the vote. Valtteri Bottas took 13.6% after becoming only the fifth different driver to stand on the podium this year, and Massa’s recovery effort earned him 10.3% of your votes.

I wanted to vote for someone who has been perfect all weekend, with zero mistake and a nice result. Only two drivers would qualify for that, and it was Hamilton and Bottas. But a victory would be expected for Hamilton, while third place for Bottas ahead of both Ferraris was more than his car was capable of.
@dan_the_mclaren_fan

In the end I gave it to Massa for his pass on Ericsson.
@adrianmorse

However if there had been a 21st voting option for someone else who appeared on the track, we might have had a completely different winner:

And the best moment was the marmot on track! Good thing Massa weaved a little bit to the right, poor creature.
@gdewilde

Dodger Of The Weekend?
@njoydesign

68 comments on “Fifth-placed Vettel wins Driver of the Weekend”