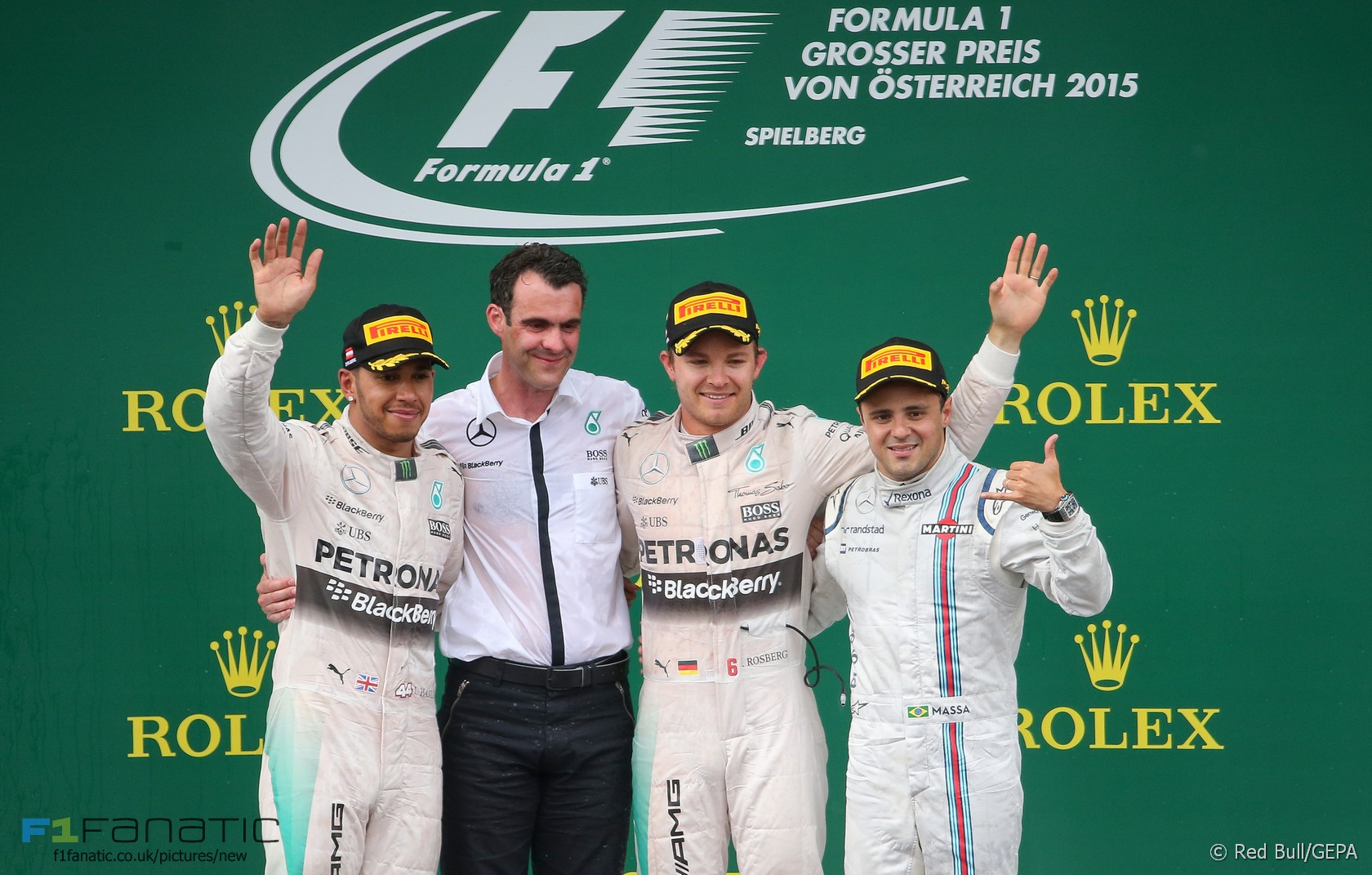 Nico Rosberg took his 11th F1 victory which put him level with one of the drivers he shared the podium with – Felipe Massa – as well as Jacques Villeneuve and Rubens Barrichello. He also took his 11th fastest lap.

However pole position went to Lewis Hamilton – his seventh of the season, meaning he has already taken as many this year as he did in the whole of 2014.

It was Hamilton’s 45th career pole position, which means he and Sebastian Vettel are now tied as the currently active drivers who have taken the most.

Michael Schumacher’s record of 68 is still some way off, but when you consider Hamilton has now had 14 poles in the last 27 grands prix, the possibility that Hamilton might pass it – as well as Ayrton Senna’s tally of 65 – is looking ever more likely.

Mercedes were beaten to pole position in Austria last year but have taken every one in the 12-month period since. The last team to do so was Williams in 1992-3, when they set the record for most consecutive pole positions with 24. Mercedes need five more to match that.

Hamilton only led for three laps but it was enough for him to equal Jackie Stewart’s record for heading 17 consecutive races:

Stewart’s streak ended at the 1970 Dutch Grand Prix, where he qualified second and finished in the same position, and the race was led almost entirely by pole sitter Jochen Rindt. Will Hamilton take Stewart’s 45-year-old record on home ground in two weeks’ time?

Hamilton has also equalled the second-longest streak of podium finishes. Yesterday’s was his 15th, equalling Fernando Alonso’s run from 2005 to 2006, leaving him four short of the all-time record held by Schumacher.

Daniel Ricciardo failed to make it into Q3 for the first time as a Red Bull driver. Only the Mercedes drivers have now reached Q3 on every occasion.

Alonso and Jenson Button picked up an unwanted record by being the first drivers to collect 25-place grid penalties. Button already has a total of 40 grid place penalties for the year so far, and that is likely to rise when he inevitably has to fit fresh power unit components later in the year.

Coincidentally, Hamilton’s penalty for crossing the pit exit line was announced in a steward’s document which matched his chosen race number – 44. It’s been a while since we’ve seen anyone collect a penalty for this infringement – the most recent example I’ve been able to find was when Rosberg did so at Singapore in 2009 – a race won by Hamilton. Rosberg was given a drive-through penalty on that occasion, but the stewards have Hamilton one of the recently-introduced five-second penalties.

If you can remember a more recent pit exit violation than that please share it in the comments – along with any other interesting stats you spotted in this weekend’s race.

66 comments on “Rosberg matches Massa as Hamilton reaches a record”