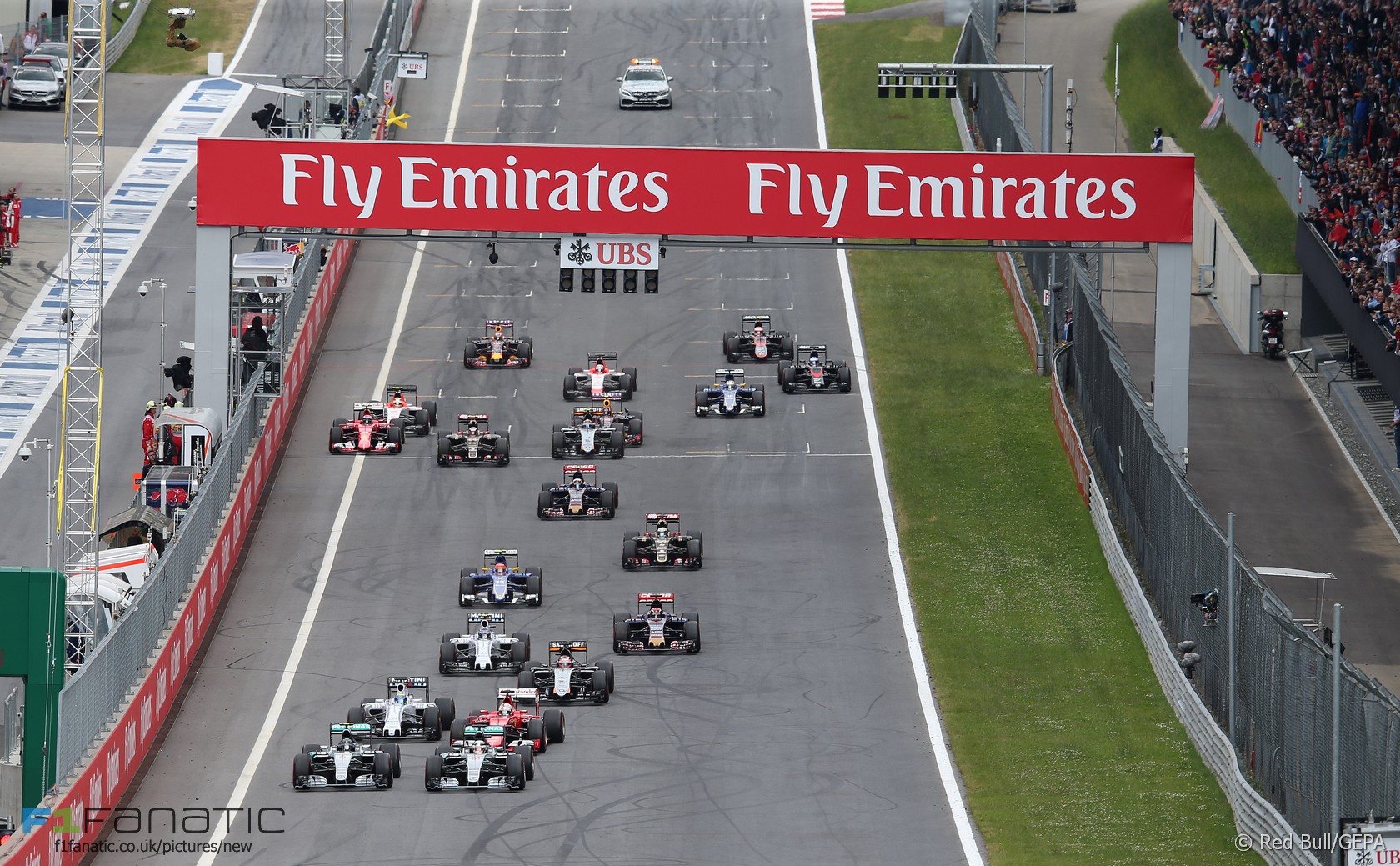 Which F1 driver was the best performer during the Austrian Grand Prix weekend? Lewis Hamilton – Half a second off the pace on Friday and didn’t seem to be much closer to his team mate as the track dried in qualifying. Then it all seemed to click when it mattered: suddenly Hamilton found his missing chunk of time in the middle sector and claimed pole position, despite spinning at the beginning of his final lap. However his start was tardy – Hamilton later said he wasn’t satisfied with recent changes Mercedes have made to their clutch – and he spent much of the race chasing Rosberg. Then made life more difficult for himself by straying across the pit lane exit line and collecting a five-second time penalty, so had to accept second.

Nico Rosberg – Before he spun at the last corner of his final flying lap in Q3 Rosberg had found the missing time to his team mate and had a good chance of taking pole position. However he made an excellent start, took the lead from Hamilton and had got a hold on first place when the Safety Car came out. Thereafter his run to victory looked reasonably straightforward, though a graining tyre gave cause for concern in the closing stages. Daniel Ricciardo – It was always going to be a tough home race for Red Bull and it got tougher when Ricciardo had to take his fifth engine of the year and the subsequent ten-place grid penalty. Had a new chassis after his problems in Canada but lost brake temperature in qualifying and didn’t make the cut for the top ten for the first time since joining Red Bull. Ran a huge, 50-lap stint on the softs so he could attack at the end on super-softs after taking his pit stop penalty. This worked out well: he was able to take Nasr for the final point but ran out of time to demote Perez.

Daniil Kvyat – Got into Q3 but also had to take a ten-place grid penalty, leaving him 15th on the grid. Collided with Perez at the start and had to replace his front wing, but other bodywork damage made the car “very tough” to drive, and he finished 12th. Felipe Massa – Having brought a raft of updates for the FW37 Williams played their cards close to their chest as usual on Friday, when Massa had a near-miss with Ferrari team principal Maurizio Arrivabene in the pit lane. Out-qualified Bottas thanks in part to the yellow flags, taking fourth on the grid. He ran in that position in the race until Vettel’s slow pit stop handed him his first podium finish of the year.

Valtteri Bottas – Was pleased with the performance of his updated car and especially its performance on long runs on Friday. But had to settle for sixth on the grid as he was unable to use DRS at the end of his final lap because of the yellow flags brought out by Hamilton’s spin. Passed by Verstappen at the start, he got by the Toro Rosso driver in the race and then passed Hulkenberg too, only for the Force India driver to jump back ahead via the pits. Finally passed Hulkenberg again for an eventual fifth, as a braking trouble hampered further progress. Sebastian Vettel – Quickest on Friday by little more than a hundredth of a second, but twice had to stop with transmission-related problems. Fastest again on Saturday morning, but didn’t have the one-lap pace to split the Mercedes, although he would have been quicker had he also not been unable to use DRS. Didn’t have the pace to attack Mercedes at the start of the race on super-softs, but was quicker on softs in the second half of the race. However by then a slow right-rear tyre change had dropped him to fourth behind Massa, where he finished.

Kimi Raikkonen – Wasn’t able to do a long run on the super-soft tyres on Friday after locking up and damaging them. Dropped out in Q1, blaming the team for not getting him out in time to do three flying laps, though his team mate didn’t need that many to get the job done. Crashed out on the first lap of the race, taking Alonso with him, and couldn’t explain why afterwards. Not his best weekend.

Fernando Alonso – Both McLaren drivers accumulated comical 25-place grid penalties. But Alonso, running the team’s new aerodynamic kit including a heavily revised and shortened nose, got into Q2. The upshot of that was he only had to take a drive-through penalty in the race as he could only serve a small portion of his grid penalty. He started well enough that he was up with Raikkonen turn two – unfortunately the Ferrari driver then dropped it into the barriers, taking Alonso with him.

Jenson Button – Eliminated in Q1 having been one of the first drivers across the line after the chequered flag came out on a drying track. That meant his 25-place penalty became a stop-and-go penalty for the race. Button was all in favour of getting his mandatory pit stop out of the way behind the Safety Car, meaning he could run to the end of the race after taking his penalty. But we’ll never know how that would have worked out, as his car developed a problem and his team elected to stop rather than risk losing another power unit. Nico Hulkenberg – Reacclimatised to F1 after his Le Mans triumph, and with a new engine behind him went sixth-fastest on Friday. He improved by one place on Saturday to take fifth on the grid, while Perez went out in Q1. In the race he was passed by Bottas, jumped back ahead with a quick pit stop, but ultimately lost out to the Williams. However sixth place was Force India’s best result of the year so far, and helped them pass Lotus in the constructors’ championship.

Sergio Perez – Stuck behind Alonso in Q1, with Raikkonen close behind, and failed to make the cut on the drying track. However he started well, despite being on the harder tyres, and nabbed a place off Grosjean at the restart. After switching to super-softs for the second stint, he was able to pass Kvyat and Nasr for ninth place. Max Verstappen – On his first F1 race weekend at a track where he has raced before Verstappen got into Q3, qualified seventh, and picked up another place at the start. After that it was a question of how many Mercedes-powered cars could he keep behind. Bottas got him early on, and by the time Maldonado was on his tail Verstappen was having trouble with his tyres, so he had to settle for eighth.

Carlos Sainz Jnr – Was a few tenths off Verstappen’s pace when the track was greasy on Friday, and a similar margin off in qualifying, where he set his car up with rain in mind. It didn’t arrive, but a quick start moved him up to ninth. Made a smart call on his own to stay out of the pits when he was told to, as Nasr in front had gone in, but when Sainz came in his pit stop was slow. A pit lane speeding penalty and an electrical problem finished off his chances. Romain Grosjean – Having enjoyed the luxury of getting to drive his car in first practice for a couple of races Grosjean was relegated to spectator status again this weekend and will continue to do so until Singapore while Lotus give more seat time to Jolyon Palmer. When he did get in the car he was hampered by reliability niggles, and having reached Q3 was unable to set a time. Got hung out wide by Sainz at turn three after the restart, which allowed Perez through, and shortly afterwards he ran wide at turn eight. A good points finish was still on, however, until his gearbox failed.

Pastor Maldonado – Demonstrated Lotus’s potential with the fourth-fastest time on Friday, ahead of Hamilton, but blamed traffic for failing to accompany his team mate into Q3. He seemed to be distracted by Ericsson’s jump start and lost two places on the first lap, but recovered to finish seventh. On his way he jumped past Perez in the pits, and held on to some increasingly lurid slides as he found a way past Verstappen. Marcus Ericsson – Failed to make the cut in Q2, where Nasr beat him by over seven tenths of a second. Jumped the start, collecting a penalty, and was further hampered by intermittent power cut-outs on his car.

Felipe Nasr – Fifth-quickest in first practice and was satisfied to reach Q3, although he was another driver who was hampered by the yellow flags Mercedes caused. Might have been able to hang on for the final point had his brakes not overheated – a problem which delayed him in Canada as well.

Will Stevens – Spun in qualifying and was over a second slower than his team mate, though he said traffic was to blame. His race was over quickly after debris damaged his radiator on the first lap.

Roberto Merhi – Technical trouble limited his running on Friday but despite that and not having run the super-soft tyre he comfortably beat his team mate – and was faster through sector one than Raikkonen’s Ferrari! Unsurprisingly he was the last driver running at the flag, though 14th is Manor’s best result so far. Several drivers go into the ‘strong race, weak qualifying’ column, including race winner Rosberg, Maldonado (who had a decent run in Canada too) and Ricciardo.

Verstappen had the Toro Rosso up in places it didn’t deserve to be early on, though I wonder if he could have held on to seventh at the end. Massa had a very solid weekend, but it’s hard to point to an aspect of it which stands out as being especially good, particularly as Bottas had a compromised race. The same is true of Vettel to an extent, though he showed some excellent pace in practice despite bearing the brunt of Ferrari’s technical troubles.

So my Driver of the Weekend is Hulkenberg. He was great in qualifying, leaving his team mate well behind, and had an error-free run in the race where he only lost one place to an obviously quicker car. All of which says to me he left little on the table. Who says an F1 driver can’t do Le Mans without compromising their grand prix performance?

Vote for your Driver of the Weekend

Who was the best driver of the 2015 Austrian Grand Prix weekend?