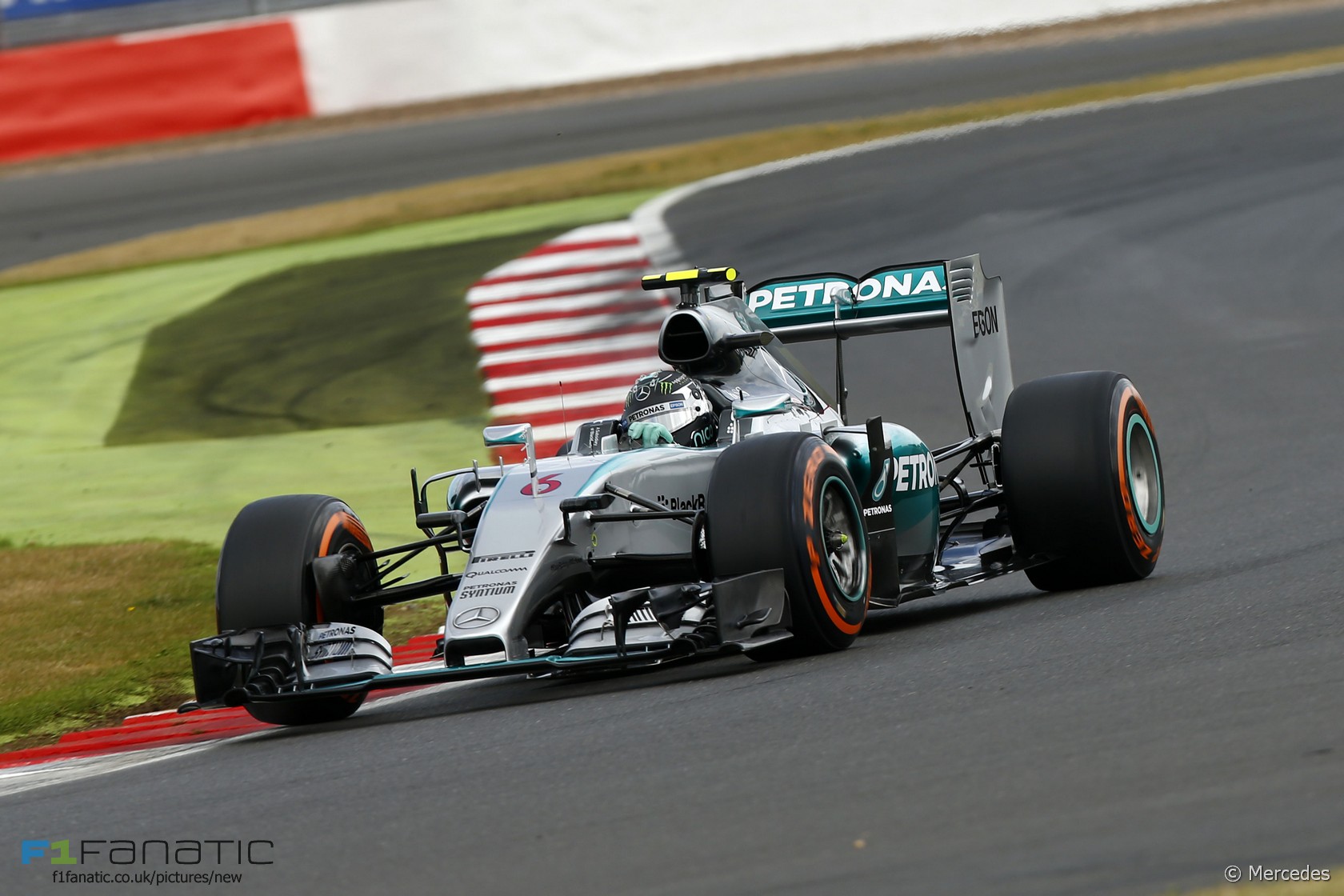 There are no surprises at the sharp end of the grid for the British Grand Prix: Mercedes have their fifth consecutive one-two, while Lewis Hamilton starts from pole position for the eighth time this year.

But as we saw in Austria that doesn’t make victory for Hamilton a foregone conclusion. Particularly at Silverstone, where the pole sitter has only won four times in the last two decades.

After losing the lead to Rosberg at the start of the race at the Red Bull Ring, Hamilton has reverted to a previous clutch set-up which he preferred. But a lot is riding on those pivotal first seconds of the race when the two Mercedes drivers apply the power.

One way or another, Rosberg has whittled away Hamilton’s advantage in the last few races. The gap between the pair of them is just ten points, and what a few weeks ago had the potential to be a Hamilton championship cakewalk is not looking a lot more interesting. A Rosberg when tomorrow would serve to ratchet up the pressure on Hamilton even more.

But the most interesting battle on the track tomorrow could be the one behind the two silver cars. Ferrari had a difficult qualifying session and were beaten by the two Williams drivers. The red cars have dependably been more competitive over a race distance, so the contest for the final podium position should be one to watch. And Red Bull fancy their chances of getting Daniil Kvyat into the mix as well.

As forecast, Saturday brought cooler conditions than Friday, and Sunday is expected to see a further drop. A cloudy day is expected with maximum temperatures around 20C. The prospect of rain in the late afternoon has almost completely diminished. Drivers will therefore find the track conditions significantly different to what they experienced on Friday afternoon. The last-minute tweaks they make on the way to the grid will be all-important. While a two-stop strategy was preferred by most last year, Pirelli expect one-stop strategies will be more commonplace.

Track limits were a major talking point during qualifying as more than half of the drivers had at least one lap time deleted for abusing the run-off areas at Silverstone. Some of the support race drivers have already discovered to their cost that the stewards will not turn a blind eye to drivers going off the track and gaining an advantage – Seb Morris picked up two penalties for doing so in today’s GP3 race.

Last year Fernando Alonso and Sebastian Vettel repeatedly accused each other of doing the same thing while fighting a tooth-and-nail battle for position. Don’t be surprised if we hear more of the same tomorrow – Copse and Club are the main trouble spots.

But a repeat of the kind of action we saw between Alonso and Vettel last year would be a timely reminder that it’s not the race weekend format which is selling F1 short at the moment, it’s the lack of competition. Despite that, Silverstone may still serve up another race to remember.

Will Hamilton take his third victory in front of a home crowd? And who will be ‘best of the rest’ at Silverstone?

Share your views on the British Grand Prix in the comments.