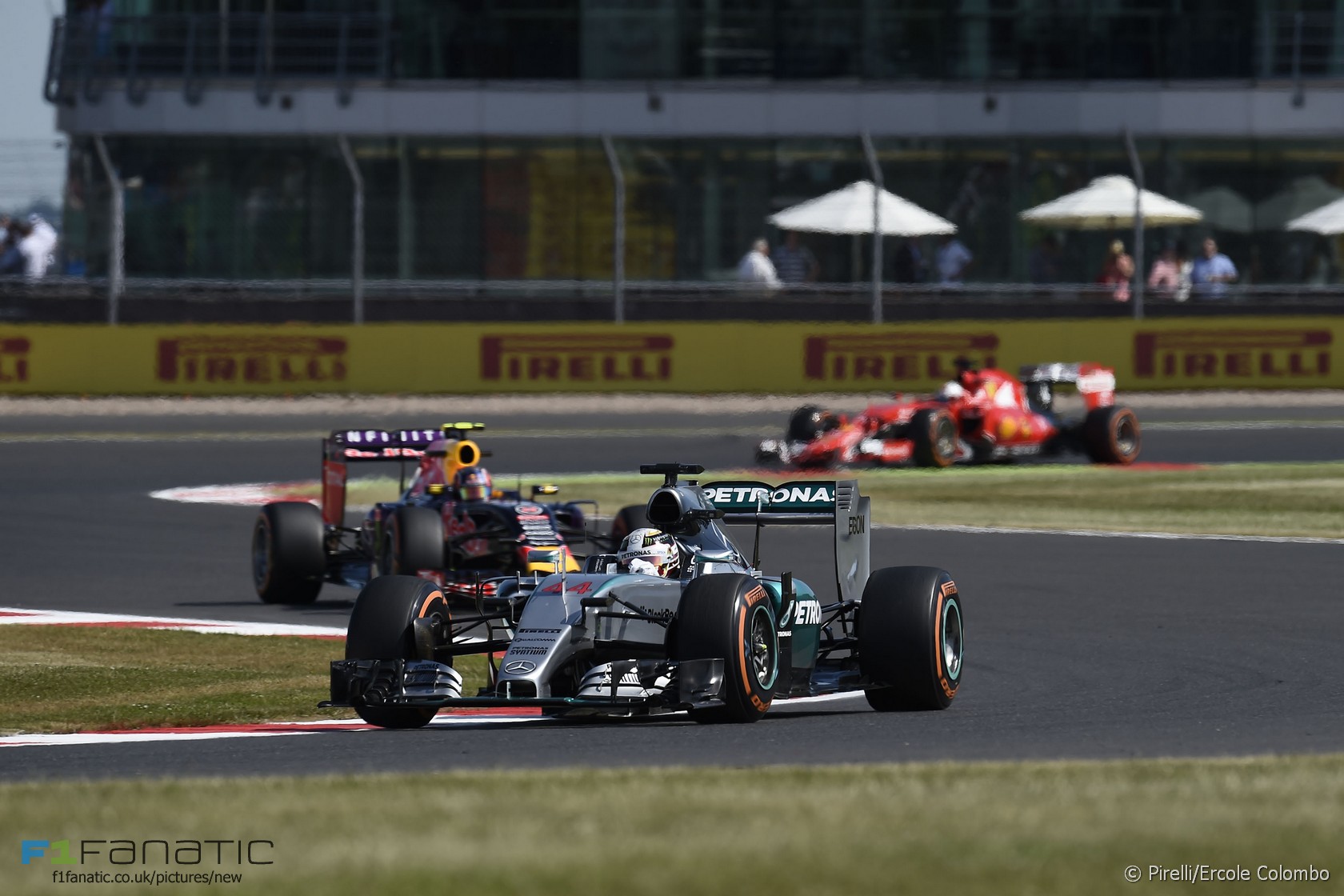 Lewis Hamilton claimed his eighth pole position of 2015 and his third for his home grand prix at Silverstone.

Mercedes locked out the front row of the grid and behind them the two Williams cars relegated Ferrari to the row three.

The Ferrari drivers felt they had to use a set of the medium tyres in order to make it through into the second part of qualifying. Raikkonen headed the times after switching to the softer compound.

However both Mercedes drivers easily made it through using just the hard tyres, as did the Red Bull pair and the Williams of Valtteri Bottas.

Having looked quick in final practice, Max Verstappen hit trouble early in qualifying with a spin at Village corner. The Toro Rosso driver needed another run to secure his passage to Q2.

But the corner which caused the most problems for drivers was Copse, where they had been warned their lap times would be deleted if they ran wide. Many drivers did so, and as a result several of them had to do extra laps to post a time that would stand.

The Manor drivers dropped out as usual – with Roberto Merhi lagging a long way off Will Stevens as he has done all weekend. They were accompanied by the two McLaren drivers and Felipe Nasr, the latter just 11 hundredths of a second slower than Pastor Maldonado.

Hamilton had to abandon his first effort at a time in Q2 after locking his front-right wheel at Village. He did another lap on the same set and made it through, although he will have to start the race on that set of tyres.

He was also unable to match the pace set by his team mate, who lapped in 1’32.737 to head the second phase of qualifying.

Copse continued to catch drivers out, including Maldonado who had a time deleted as he had in Q1. This time he was unable to make it into the next phase, and Lotus team mate Romain Grosjean was also eliminated as he struggled with his car’s handling.

Raikkonen also lost one of his lap and that put him under some pressure. The Ferrari driver had begun his run late in the session and he now had just one chance left to get into Q3, but his final effort was comfortably quick enough.

Perez was another driver who had a lap time deleted, though it made no difference to his eventual finishing position of eleventh.

Hamilton’s first lap in Q3 was superbly committed: despite a puff of smoke from his right-front brake at Club, he stopped the clock at 1’32.248. Rosberg, running behind him, was a little more than a tenth of a second off after their first runs.

Last year Hamilton had made the mistake of backing off too soon on his final effort in Q3, letting Rosberg in to take pole position from him. He was in a similar position this year: two sectors in it was clear no improvement was coming, so he backed off and headed for the pits.

But this time Rosberg wasn’t able to capitalise. “Very strange,” he reported on the radio, “no grip on the left-front”. Hamilton duly claimed his third British Grand Prix pole position.

Behind them the two Williams drivers kept the Ferrari pair from the second row. A displeased Sebastian Vettel blamed Felipe Massa for holding him up on his out-lap as they came onto the Hangar straight, disrupting his tyre preparation.

Daniil Kvyat secured seventh place on the grid but team mate Daniel Ricciardo could only manage tenth after becoming the latest driver to fall foul of the track limits. The pair were separated by Carlos Sainz Jnr and Nico Hulkenberg.

91 comments on “Home pole for Hamilton as Williams beat Ferrari”