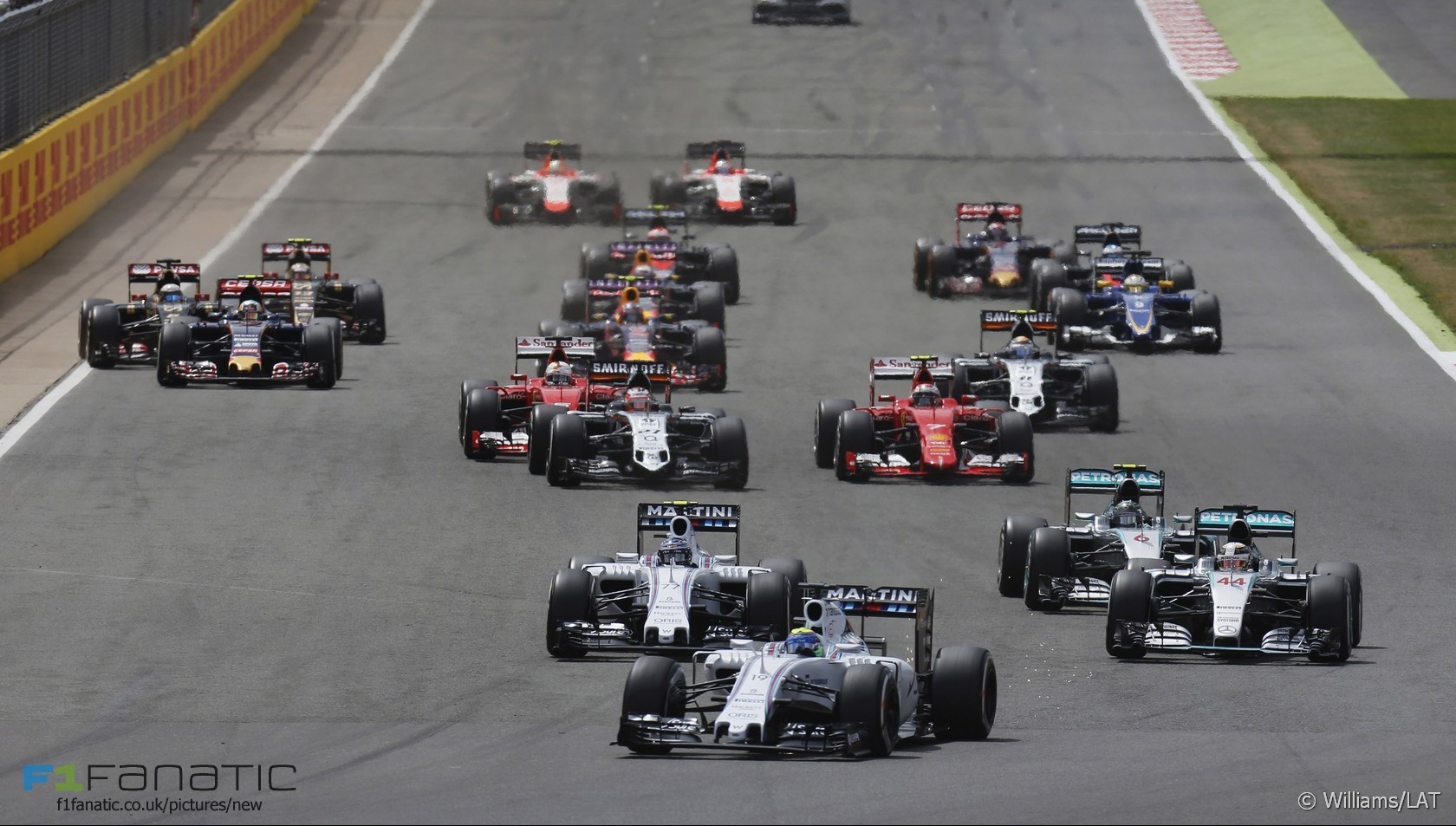 Which F1 driver was the best performer during the British Grand Prix weekend? Lewis Hamilton – Looked genuinely uncomfortable in the warmer conditions on Friday, but overnight changes seemed to result in a car he was much happier with. He duly took his eighth pole position of the year – as in Austria his first lap was good enough and neither Mercedes driver improved on their second runs. Having reverted to an old clutch set-up for his start he blamed a lack of grip on his grid position for a sluggish getaway which allowed both Williams drivers past. He briefly got back in front of Bottas only to lose the position again while attacking Massa. He told the team he couldn’t pass Bottas, but his lap 19 pit stop and a flying out lap ensured he jumped both the FW37s. He had a brief off at Copse when the rain arrived, and after the track dried he began to struggle with his front tyres. However his decision to pit on lap 43 for intermediates just as the rain was returning was inspired, and won him the race.

Nico Rosberg – Gearbox problems impaired his practice running on Friday and Saturday but he was clearly very quick. However having been a tenth of a second off Hamilton on his first run in Q3 Rosberg couldn’t improve on his final run, blaming a loss of grip on one of his front tyres. Having been passed by the two Williams drivers at the start he spent the first stint stuck behind Hamilton, and the pit stops failed to get him in front of either of the Williams drivers, though he came very close. Despite a brief off at Woodcote when the rain fell he quickly picked off Bottas and Massa, then slashed Hamilton’s lead. But he stayed out a lap longer than his team mate on slick tyres, which ended his bid for victory.

Daniel Ricciardo – Still seems unsettled and wasn’t quite on Kvyat’s pace in practice, but would have been seventh on the grid had he not been among the many drivers to lose a lap time for running wide. Arguably triggered the first-lap collision which put three drivers out, but was cleared, he then retired before half-distance with an electrical problem.

Daniil Kvyat – A spin late in the race when the rain returned certainly cost him a better finish – at least fifth, probably fourth in front of the Williams drivers. Until that point he’d been on great form, qualifying seventh behind six faster cars and using an early pit stop to jump ahead of Hulkenberg. Felipe Massa – Williams seemed further from the pace than usual on Friday but it all came good on Saturday as they ejected Ferrari from row two, led by Massa. A brilliant start then propelled him into the lead, but his team mate was clearly quicker at this point and Massa came under pressure. His first pit stop was slightly slow as the team chose to clear debris from his rear wing, but even without that he wouldn’t have stayed ahead of Hamilton (though it might have been less close with Rosberg). When the rain fell Rosberg passed him easily at Village, and he was jumped in the pits by Vettel, falling to fourth.

Valtteri Bottas – Susie Wolff drove his car in first practice, then in qualifying he was narrowly beaten by Massa. Having given Hamilton a bit of an easy time at The Loop on lap one, Bottas pounced at the restart to take up second behind Massa. In Hamilton’s view, Bottas was quicker than Massa, and had Williams not initially told him not to pass his team mate Bottas might have got ahead at this point. Hamilton jumped him in the pits and Rosberg overtook him when the rain began to fall. Having been slightly slower than Massa on the hard tyres, Bottas lost far more time on intermediates at the end of the race, and was nearly passed by Kvyat. Sebastian Vettel – Was held up by Massa during his final out-lap in Q3, which may have affected his tyre preparation, then had “a really bad start” from sixth on the grid. It got worse at the restart where he fell behind Perez, though he took that place back on lap nine. An early first pit stop got him in front of Kvyat and Hulkenberg, and when it started to rain he passed Raikkonen. Significantly quicker than the Williams drivers at this point, a well-timed pit stop got him ahead of them for a podium which had looked unlikely earlier in the race.

Kimi Raikkonen – Looked quick from the word go in practice and deserved to line up in front of Vettel. He was passed by Hulkenberg at the start, but pit strategy got him back ahead. But it all went wrong when the rain arrived and Vettel shot past him. Raikkonen made the call for intermediates but sooner regretted it as the track started to dry, ruining his tyres. He spun, made another stop for fresh rubber and was lapped before finishing eighth.

Fernando Alonso – Both McLaren drivers made it to the team’s home race without incurring more penalties for changing power unit parts, though Alonso came close as the team was reprimanded for accidentally fitting one of Button’s tyres to his car. He spun trying to avoid the Lotus drivers at the start and inadvertently ended Button’s race. The high rate of retirements helped him salvage a point, however.

Jenson Button – Sounded very unhappy with his car’s balance throughout practice, so it was no surprise to see him line up with just the Manors in his mirrors. The melee at turn one brought an early end to his 16th home race. Nico Hulkenberg – Force India’s heavily revised car looked best in Hulkenberg’s hands and he duly took it into Q3. A superb start – which he described as the best he’s ever made in F1 – put him ahead of both Ferraris. However they pitted before him, as did Kvyat, which cost him a total of three places, though Raikkonen’s troubles later elevated him back to seventh.

Sergio Perez – Narrowly missed out on joining his team mate in the top ten shoot-out but said the updated VJM08 still has much untapped potential. Scrapped with both the Ferrari drivers during the race but finished behind both of them, saying he waited too long to put on intermediates at the end.

Max Verstappen – Very pleased with his car after final practice but was caught out at Village in Q1, spinning off. The team later identified a throttle torque calibration problem which was blamed for his Q2 elimination. He was the only driver to start the race on the hard compound tyres, but after the restart he spun into retirement at Farm.

Carlos Sainz Jnr – “We knew Carlos would be strong as he had already tested here with us before,” said chief race engineer Phil Charles. Sure enough he was the only Toro Rosso driver in Q3, lining up eighth. But he made a poor start and slipped out of the points before an electrical problem ended his weekend’s work. Romain Grosjean – As usual he spent first practice watching Jolyon Palmer drive his car, but he lost more track time in the second session by spinning off at Luffield. Puzzled by his car’s balance in Q2, he registered his lowing qualifying position of the year. Pinned between Ricciardo and Maldonado at the start of the race, damage from the collision forced him out.

Pastor Maldonado – Like Grosjean, Maldonado also dropped out in Q2, and was also eliminated in the first-lap collision at Village.

Marcus Ericsson – Missed first practice as Raffaele Marciello was in his car. Got through into Q2 but only ended up one place in front of his team mate, suggesting this was the Sauber’s level. Points were possible in the race but he got his tyre strategy badly wrong when the rain fell: pitting too soon for intermediates then compounding his error by switching to slicks just before the rain returned.

Felipe Nasr – Didn’t get his tyres in the right temperature range in Q1 and was eliminated. A gearbox fault on his reconnaissance lap meant he was a non-starter. Will Stevens – Was more comfortable with the car balance on Friday as the pair evaluated the team’s upgrade package. He out-qualified Merhi by a whopping two seconds but lost time in the pits when his team weren’t ready for him. An early switch to intermediates also made life difficult – he spun off on worn tyres late in the race, losing his front wing.

Roberto Merhi – Had a spin at Luffield during second practice but managed to get going again just as the red flags came out. Was one of many drivers to have a time deleted in qualifying, but even so was a long was off his team mate’s pace. Nonetheless he avoided the major pitfalls in the race to take a best-yet finish of 12th. Hamilton got an awful lot right at his home race: a great start, a superbly-judged call to put intermediate tyres on and great pace when the track was at its wettest. He looked vulnerable shortly before the rain returned, however, and he did squander one place with a failed attempt to pass Massa at the restart.

Similarly Vettel was in excellent form on a wet track and having seemingly been out of contention manage to salvage a podium finish. However his early difficulties were mostly of his own making and it was a surprise to see him out-qualified by Raikkonen for once.

Massa deserves credit for an excellent start but it was clear in the opening phase of the race he was the slowest of the leading quartet. He fared better when the rain came than Bottas, however. Another driver who impressed in the rain was Kvyat, although his spin (unseen by the television cameras) definitely prevented him from finishing higher up.

All of which leaves me casting my vote for the same driver as last time: Nico Hulkenberg. He got the job done noticeably better than his team mate in qualifying again, made an excellent start, and only lost places to drivers who had quicker cars underneath them.

Who was the best driver of the 2015 British Grand Prix weekend?