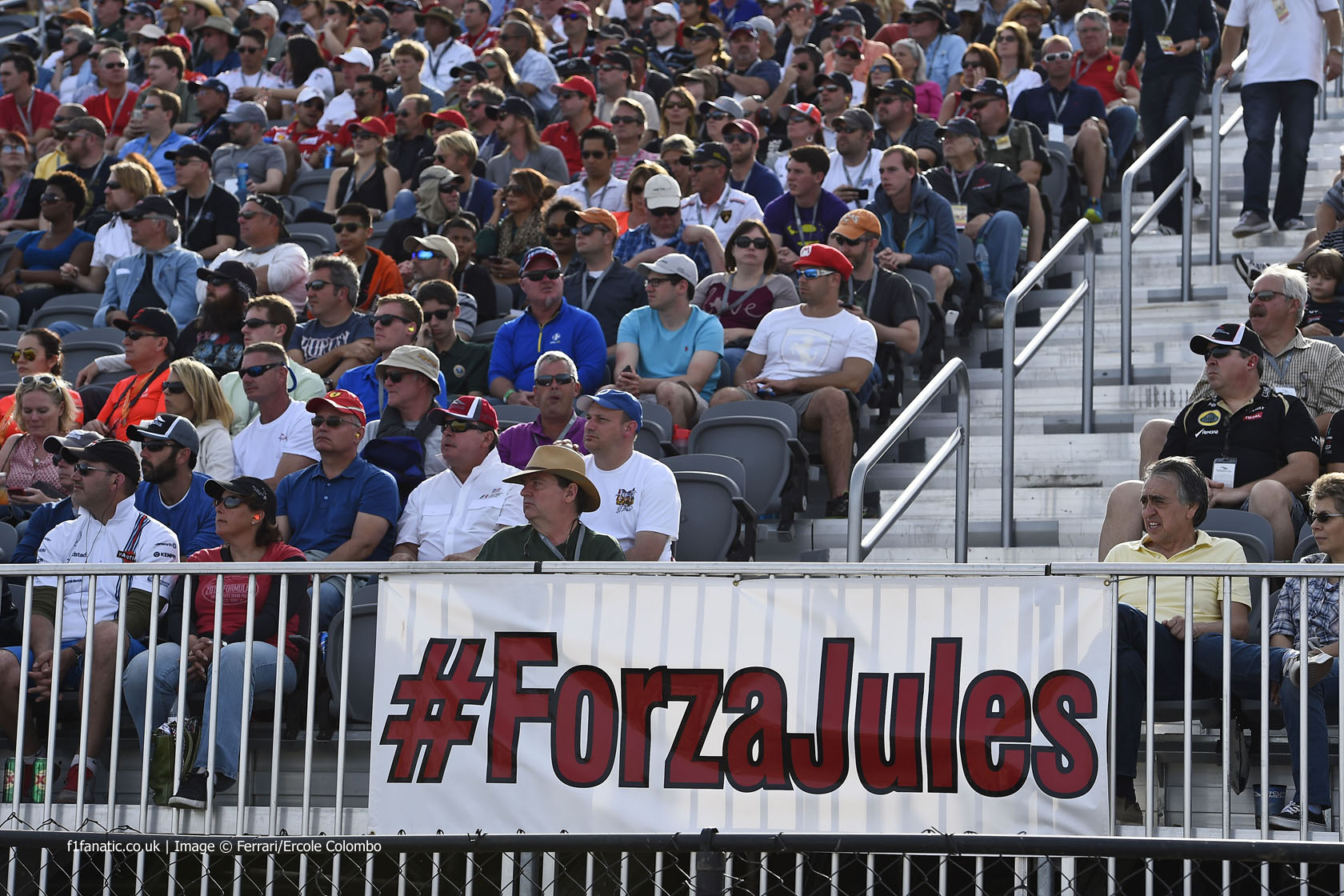 In the round-up: Jules Bianchi’s father describes the effect the continued lack of improvement in his son’s condition is having on the family.

Bianchi condition 'more terrible than if he had died', says father (ESPN)

"It's unbearable, it's a daily torture. We sometimes feel like we're going crazy, because for me, it certainly is more terrible than if he had died."

"Like any competitive team we want performance yesterday, and unfortunately with engines the lead time is a lot longer than with the chassis. Patience is something that we are not really good at."

"It compromises everything because we have to take off our strong point, which is downforce."

"We'd much rather be a top team that are super well-funded and that sort of thing but it's not all bad."

"I have been told there could be an opportunity so I just have to try my best and show the team why they should take me."

"It’s very difficult to say (how much potential is in the power unit), but I think not only the power unit side but also the chassis side applied a new aero kit."

"Keeping up development pace is not going to be easy, but we are introducing around Singapore a bigger upgrade."

"The country's enforcement directorate, responsible for fighting financial crime, has alleged Mallya entered into an unauthorised agreement in 1995 to advertise the Kingfisher beer brand name on racing cars during Formula One championships between 1996 and 1998."

Not exactly Dan Gurney at the Nurburgring (The Way It Is)

"We've fallen a long way since the heydays of Gurney, Andretti, Phil Hill, Richie Ginther and Carroll Shelby, and on current evidence there's nothing to suggest that any of the great international feats achieved by these men will ever be repeated."

How much media attention would Lewis have got if he had worn a suit and tie yesterday? I imagine Mr E has been smiling all day.

HAHAHA to the stewards + race consultant from this weekend at Zandvoort. Good job. Same ones that penalized me last year and not others.👍😂👍 It looks like even Kimi Raikkonen’s most ardent supporters are beginning to think it could be the end of the line for him:

I truly like Kimi Raikkonen, he’s probably one of my favourite drivers. I think he’s deserving of more than the single championship he has and when he’s on form he’s easily one of the best talents in F1. I was gutted when he left, and then thrilled when he returned with Lotus, and then back with Ferrari.

That said though it’s pretty clear Raikkonen isn’t having a good time. He simply doesn’t seem to be on the same level as Alonso was last year or Vettel is this year. For a huge fan of him this is naturally disappointing, but it’s still pretty undeniably obvious. Now everyone makes mistakes but Alonso and Vettel have made him look distinctly average and the flair he showed in his ‘first career’ – or even when he was with Lotus – doesn’t seem to be there anymore.

I’d love Raikkonen to stay with Ferrari but realistically if they want to challenge Mercedes they need a strong second car, and last year that wasn’t Raikkonen and it still isn’t.

If Ferrari choose to replace him I would have suggested either Valtteri Bottas, Nico Hulkenberg or Daniel Ricciardo – just as this poll does. Ricciardo and Bottas are doing excellent jobs at Red Bull and Williams respectively although I can’t see Ferrari pairing Ricciardo with Vettel again or taking Bottas as he could do with another year or two to really underline he’s a tip for the future.

For me Hulkenberg is the right choice. I thought the guy was damn good when he first arrived in F1 and that was solidified from his single year at Sauber, where he virtually single-handedly wrestled that dog of a car into places it shouldn’t have been. Sauber scored 57 points that year – 51 of them coming from Hulkenberg alone. His win at Le Mans just underlines that the man is an excellent talent that for one or a number of reasons just hasn’t had the car to shine and it really is about time he got that chance.

As much as I love Raikkonen, I do think it’s time for him to move on.
Adam (@Rocketpanda)

Do you think Ferrari should keep Raikkonen for 2016? Join the debate here:

Former F1 drives Derek Bell and Hans Stuck shared victory in the 1000km of the Hockenheimring, a round of the World Sportscar Championship, 30 years ago today. However the major talking point of the race was the huge fire which broke out in the pits when the eventual winners came in to refuel, foreshadowing the similar conflagration involving Benetton at the 1994 German Grand Prix.

44 comments on “Bianchi’s family “less optimistic” over his condition”