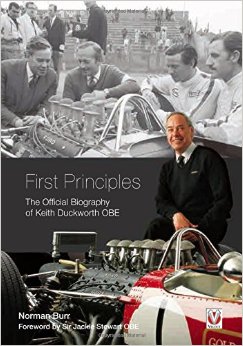 Is Keith Duckworth the most important yet least-heralded person in Formula One history?

Perhaps I’m a bit biased in favour of my namesake, but what would have become of our favourite sport had he not created its most successful engine of all time: the Cosworth DFV?

The DFV’s importance lies not just in its success, but its ubiquity. At one race in 1969 a single Ferrari was the only car in the field not powered by Duckworth’s Double Four Valve. Take that away, and what else would have powered the F1 field?

There’s no question figures likes Bernie Ecclestone were important in other ways. But even his cars needed to be powered by something, and the first time one of his drivers tasted championship success it was with a Ford-Cosworth V8 in the back.

Norman Burr’s authorised biography of Duckworth explores the creation of the DFV in detail, as well as his time at Lotus and later Cosworth projects on power boats and motor bikes. Well researched and highly readable, if anything it quotes him a little too extensively, frequently interspersing the text with ‘Duckworthisms’ to an extent which gets a bit distracting.

As the DFV faced the onslaught of its turbo-powered rivals late in the seventies, Duckworth had a sense of where this was all heading, and in 1978 wrote persuasively of the need for F1 to become a fuel-flow formula. He was ignored at the time, and vindicated 36 years later by the 100kg/hour restriction which forms a key part of F1’s current V6 hybrid turbo regulations.

Today’s engine rules, of course, do not allow the kind of freedom of development Duckworth enjoyed five decades ago. “The only substitute for money is genius,” was one of his more enduring sayings – but is it a sentiment which still applies in today’s restrictive formula?