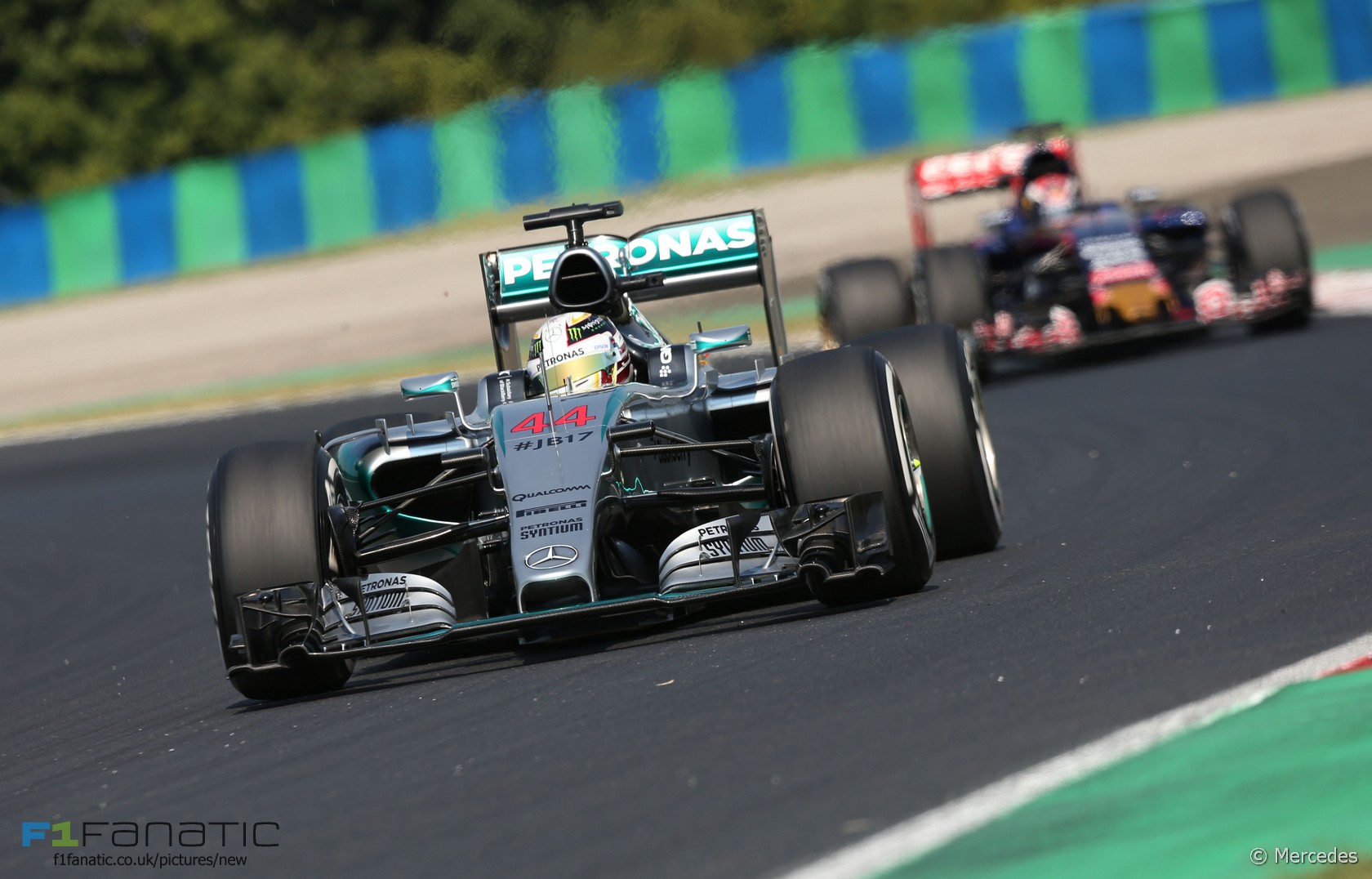 Lewis Hamilton continued his domination of qualifying by taking his fifth pole position in a row for the Hungarian Grand Prix.

Having headed all three practice sessions Hamilton took the top spot in all three parts of qualifying and was unbeaten in all three sectors around the Hungaroring.

Rosberg completed another Mercedes lock-out of the front row, while Sebastian Vettel and Daniel Ricciardo will line up immediately behind them.

The huge performance gap between the medium and soft tyres – some drivers found over two seconds during practice – meant few were willing to risk trying to get through Q1 without using the faster rubber.

Even the two Mercedes drivers were unwilling to take the risk. The only driver who did was Daniel Ricciardo, who’d been second-fastest on the mediums tyres, and fell to 12th place after everyone else had run on the softs.

Among those who couldn’t beat his mark on soft tyres were the two McLaren drivers. Fernando Alonso made it through to Q2 but Jenson Button reported there was no “deployment” from his power unit on the straight and was eliminated.

The two Sauber drivers were also knocked out, though Marcus Ericsson could at least raise a smile after spotting a group of his fans in the crowd. “They love me here!” he said on the radio.

Unlike last year, Manor were unable to get either of their cars through to Q2. Roberto Merhi headed Will Stevens by half a second.

As a picture of sheer determination, you couldn’t ask for a better one than the sight of Alonso pushing his McLaren into the pit lane after it ground to a halt on his first lap out of the pits. His efforts – and that of half-a-dozen Hungaroring marshals – were to no avail, however. Although he was able to get back into the pits during the red flag period, the team were unable to get his car going again (and not permitted to by the rules).

Alonso’s stoppage served to disrupt several drivers who were already lapping the track. Once the session resumed a final flurry of times determined who reached the top ten shoot-out.

They were led, unsurprisingly, by the two Mercedes drivers. Rosberg was the best part of half a second slower than Hamilton and, as in Q1, continued to urge his team to investigate what was amiss with his car’s handling.

Romain Grosjean only managed one lap at the end of the session but that was sufficient to claim the final place in Q3 by two-hundredths of a second from Nico Hulkenberg. Carlos Sainz Jnr, Pastor Maldonado and Sergio Perez all crossed the line after him but were unable to beat his mark.

Rosberg was first to run in the final part of qualifying. Both Mercedes drivers favoured used soft tyres for their initial run, and Hamilton sustained his advantage by over a third of a second.

Ricciardo used a new set of soft tyres to split the two Ferraris with his first run, taking fourth place from Kimi Raikkonen by less than a tenth of a second.

The final runs didn’t change the order of the top five. Rosberg began his lap strongly, beating Hamilton’s time through the first sector. But a slight lock-up at the end of the lap left him in second.

And then Hamilton blitzed the track one more time. Fastest in all three sectors, his final lap of 1’22.020 left him over half a second ahead of his team mate.

Ricciardo’s last effort was similarly clean but it wasn’t enough to get him ahead of Vettel. But he kept Raikkonen behind: the Ferrari driver will share row three with the man who has been tipped to take his place – Valtteri Bottas.