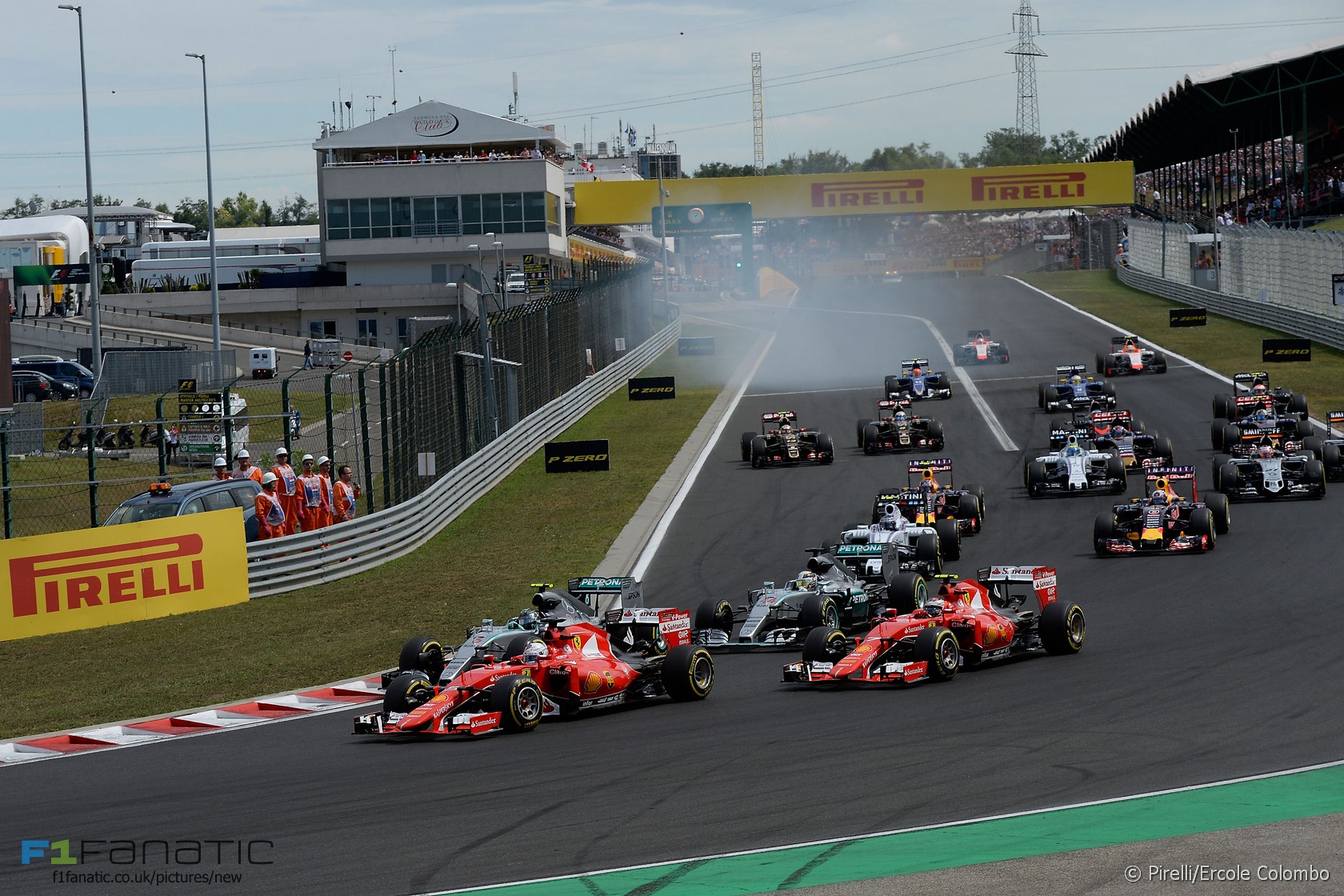 Formula One headed into the summer break on a high for the second year in a row thanks to an action-packed Hungarian Grand Prix.

It received an average rating of 9.115 out of ten from F1 Fanatic readers, making it the highest-rated fully-dry race since last year’s Canadian Grand Prix.

What made the last round of the championship so special? Over to you…

The Hungarian thriller was a welcome lift for the sport following the dark days in the wake of Jules Bianchi’s death. And for some, the race provided proof there is more right with Formula One than there is wrong with it.

After everyone keeps complaining about boring races and lack of competition, this is the second race in a row where it hasn’t been the case. I firmly believe that Formula One is in a far better state of health than many would have us think. It’s not perfect, but nothing ever is. This race was the perfect tribute to Bianchi as well, before the race was so poignant.
@Mathers

To be honest, after the shock of seeing two Ferraris ahead the race had nothing until the pit stops. Though the action was down mostly to mistakes, that’s racing and I don’t plan to devalue the entertainment this race gave us. Mechanical troubles (unfortunately for Raikkonen), driving errors (both Mercedes), brave moves (Ricciardo), solid drives (Alonso), strategic disasters (Williams), a Safety Car (sorry Rosberg) all at once made for something unbelievable. Red Bull two-three, Verstappen fourth, Alonso fifth, do we need to say more? An unusual result this year needs a very unusual race.
@Fixy

Action and drama all around the place through the whole race. Just as it should be. Just hope this isn’t a deceitful exception.
Dynamite Clock (@Dinaveer) Various explanations have been offered for why we saw so many driving errors. Did the pre-race tribute to Bianchi have an effect on the competitors? Was it down to the changing tracks conditions and the narrow confines of the Hungaroring?

Whatever the cause, there were mixed views on whether the competition was up to F1’s high standards.

It was heartening to see Vettel and Raikkonen pull away from Rosberg especially after the way the past few races have gone for Ferrari. Both were calm and collective in their approach while the rest of the field turned amateurish with their mistakes.

This might probably be the race with most number of mistakes from the professional drivers. Hamilton, Rosberg, Ricciardo, Verstappen, Maldonado, Kvyat all making mistakes and getting penalised at one point of the race.
@Evered7

Whilst I really enjoyed it, the standard of driving today wasn’t that great, but given the recent events, it’s understandable. It’s certainly been a tough week for the F1 community.

Also, it’s hard to criticise them for having a go at racing on a track where overtaking tends to be difficult.
@Jamesjames123abc Much as last year, the arrival of the Safety Car was timely, and helped shape an exciting conclusion to the race:

Honestly, an F1 race can’t get much better than this. Best race of the season.. probably best of the last few seasons. It was totally unexpected for this track and a brilliant contest. I mean who would have thought Hungary would feature so many overtakes?!

So many great points of interest: That amazing start by the Scuderia, Red Bull finding the pace, Hamilton clawing his way up the track (twice) and McLaren delivering their first genuinely solid performance of the year.

Unfortunate for Raikkonen, but at least he showed he had the pace when the car was working properly.
Michael Baumert (@Nothingreal)

Until the Safety Car it was essentially the same as a Mercedes walkway and I don’t see how that is any more exciting. Rosberg couldn’t challenge, Seb was always in control. There was some good racing elsewhere but nothing spectacular.

Then we got the Safety Car bunching everyone up and it gave us some racing incidents but as other have said it was all a little sloppy. Exciting nonetheless, but with the processional first part I couldn’t enjoy the race as a whole that much.
Simon (@Weeniebeenie)

Do not understand why people are so excited about this race. All i saw was a lot of cars hitting each other, stupid DRS overtakes, lots of penalties and a way to long safety car period as they let the slow cars pass.
Jdd

Much like Bahrain 2014 which also got massively great ratings the Safety Car was duly needed to bring excitement. We just shouldn’t forget that up to that point both those races didn’t have much to offer – I would hope though F1 didn’t need those unforeseen things like drivers crashing to get exciting.
ChrisJ (@Chriju0411)

Time to re-evaluate the Hungaroring?

After two consecutive high-scoring Hungarian Grands Prix, is it time we revised our views of a track once renowned for producing processional events?

It really surprises me that we keep getting such good races at this circuit, where overtaking is supposed to be so difficult. It’s really refreshing that despite that the drivers seem to really go for it at this track. The race was outstanding.
Dom (@3dom)