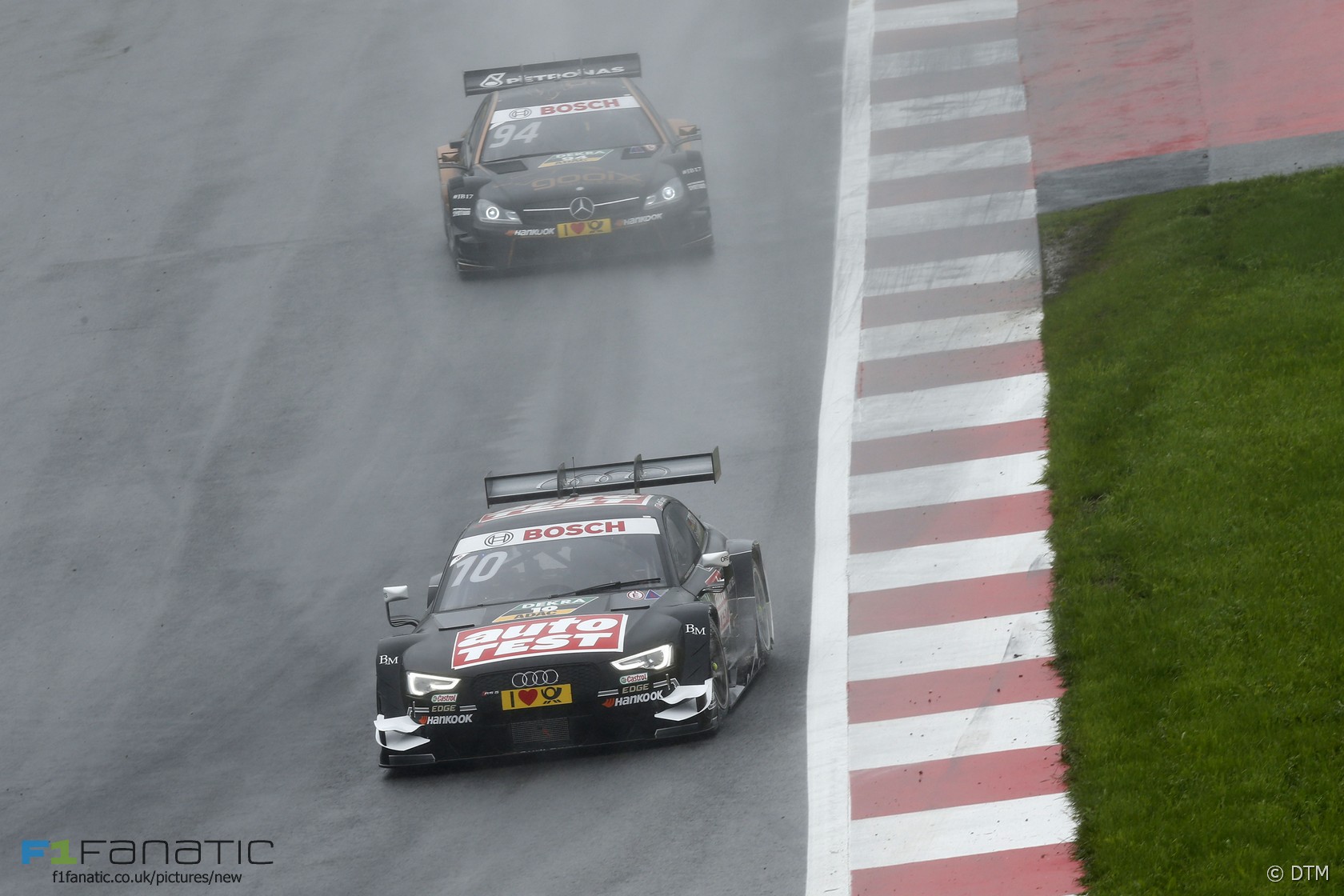 Audi sparked outrage in the DTM as its driver Timo Scheider was thrown out of yesterday’s race at the Red Bull Ring after crashing into two of his Mercedes rivals on the orders of his team.

Meanwhile the IndyCar championship battle has tightened up with two races remaining after Graham Rahal took victory in Mid-Ohio.

Elsewhere for the second weekend in a row heavy rain meant at least one race was red-flagged and half points awarded despite no competitive action taking place. The results of the second DTM race at the Red Bull Ring remain provisional pending an investigation into “a possible unsporting instruction via radio by the Audi Team Phoenix and/or Audi Sport”.

The drama began on the final lap of the rain-hit race when Audi’s Timo Scheider was overtaken by championship leader Pascal Wehrlein, who immediately moved ahead of team mate Robert Wickens. Moments later Scheider was told on the radio “schieb ihn raus” – “push him out” – and duly knocked Wickens into Wehrlein at turn three, leaving both in the gravel.

Immediately after the race Audi team boss Wolfgang Ulrich denied he had issued the instruction to Schieder. However in a statement issued by Audi later that evening Ulrich admitted he had spoken the words but did not know he was in open communication with Scheider and had not intended to give him an instruction.

It soured a weekend which began with Audi’s Edoardo Mortara declaring “here, we have the fastest car” before taking victory in race one. He profited from the misfortune of Jamie Green, who went into the race leading the points standings and seized the lead at the start, only to be sidelined by a gearbox failure on lap two.

Mattias Ekstrom doubled up for Audi in the second race, but whether they keep the silverware is now in the hands of the DTM’s sanctioning body, the DMSB. Juan Pablo Montoya saw his championship lead over Graham Rahal slashed from 42 points to 9 with two rounds to go.

On the undulating, sinuous and narrow Mid-Ohio circuit, where overtaking is especially difficult, Rahal lined up an unpromising 13th. He had worked his way up to sixth and had just pitted when Sage Karam caused the race’s third Safety Car period. With leader Montoya and several others still needing to pit, Rahal inherited the lead.

The RLL driver had to fend off a late attack from Justin Wilson following a fourth caution period caused by a collision between Rodolfo Gonzalez and Charlie Kimball. Despite Wilson having one ‘push-to-pass’ use left, Rahal clinched victory on his home track followed by Simon Pagenaud and pole sitter Scott Dixon, with Montoya an unhappy 11th. Rain sluiced the Red Bull Ring on Sunday, leading the third Formula Three race to be postponed and then, after four laps behind the Safety Car, red-flagged. That handed a half-points win to pole sitter Antonio Giovinazzi, extending his advantage over Felix Rosenqvist.

Jake Dennis won the first round after passing pole sitter Rosenqvist at the start, then resisting race-long pressure from his Prema team mate, which came to a head in the final two laps as the pair also came under attack from Giovinazzi.

Rosenqvist made pole count in race two but Giovinazzi limited the damage in the championship with second place ahead of Lance Stroll – the Ferrari development driver making his first appearance on an F3 podium.

Jari-Matti Latvala’s championship hopes are as good as dead, but he was able to console himself with a third home victory in last weekend’s Rally of Finland.

Sebastien Ogier continued his run to the championship with second place, but the Volkswagen pair faced early pressure on from team mate Andreas Mikkelsen, Ford’s Ott Tanak and Hyundai’s Hayden Paddon. But as the treacherous Finnish stages claimed their victims one by one, the contest for victory became an exclusively Latvala-Ogier affair.

Robert Kubica was also in the wars again, and the final podium place was claimed by Mads Ostberg.

Ford continued their domination at Queenland Raceway, which hosted a SuperSprint triple-header. Championship leader Mark Winterbottom took his seventh win of the year in race one ahead of Scott McLaughlin, who made his first trip to the podium this year. Winterbottom started second, but leapfrogged team mate Chaz Mostert and never looked back. Mostert and Shane van Gisbergen provided the race’s best action, trading paint on several occasions, but ultimately allowing Craig Lowndes through into the final podium position.

Winterbottom also took race two honours, getting past pole sitter Lowndes in turn two, and was once again unchallenged for his fourth straight win. Lowndes ended up in second while Mostert was third and David Reynolds picking up an impressive fourth place. Van Gisbergen suffered his first retirement since 2013 after suffering a transmission fault on the grid.

Mostert prevented a Winterbottom clean sweep in race three with a straightforward win from pole position. Craig Lowndes took second ahead of Winterbottom, the pair separated by 256 points at the top of the championship table.

Kyle Busch had a fourth consecutive NASCAR win in his sights when he ran out of fuel on the final lap at Pocono, letting team mate Matt Kenseth through to win. Joey Logano and Martin Truex Jnr were also among those who ran dry while trying to stretch their fuel economy.

The race was red flagged early on as Kasey Kahne crashed into the pit wall, which had to be repaired.

The name of the second Indy Lights race-winner had a familiar ring to it – Sean Rayhall has only started half of the 14 races so far this year but took his second win. Max Chilton took second, as he had in the first race behind RC Enerson.

Title rivals Jack Harvey and Spencer Pigot tangled on the opening lap of race one, meaning just six points separate them heading into the final weekend at Laguna Seca next month.

Did you spot any interesting racing we’ve missed this weekend? Let us know in the comments below.

Next weekend we have the World Rallycross Championship, NASCAR and the BTCC returning after their summer break.

Thanks to @mathers for contributing to this article.

71 comments on ““Push him out”: Audi sparks DTM furore”