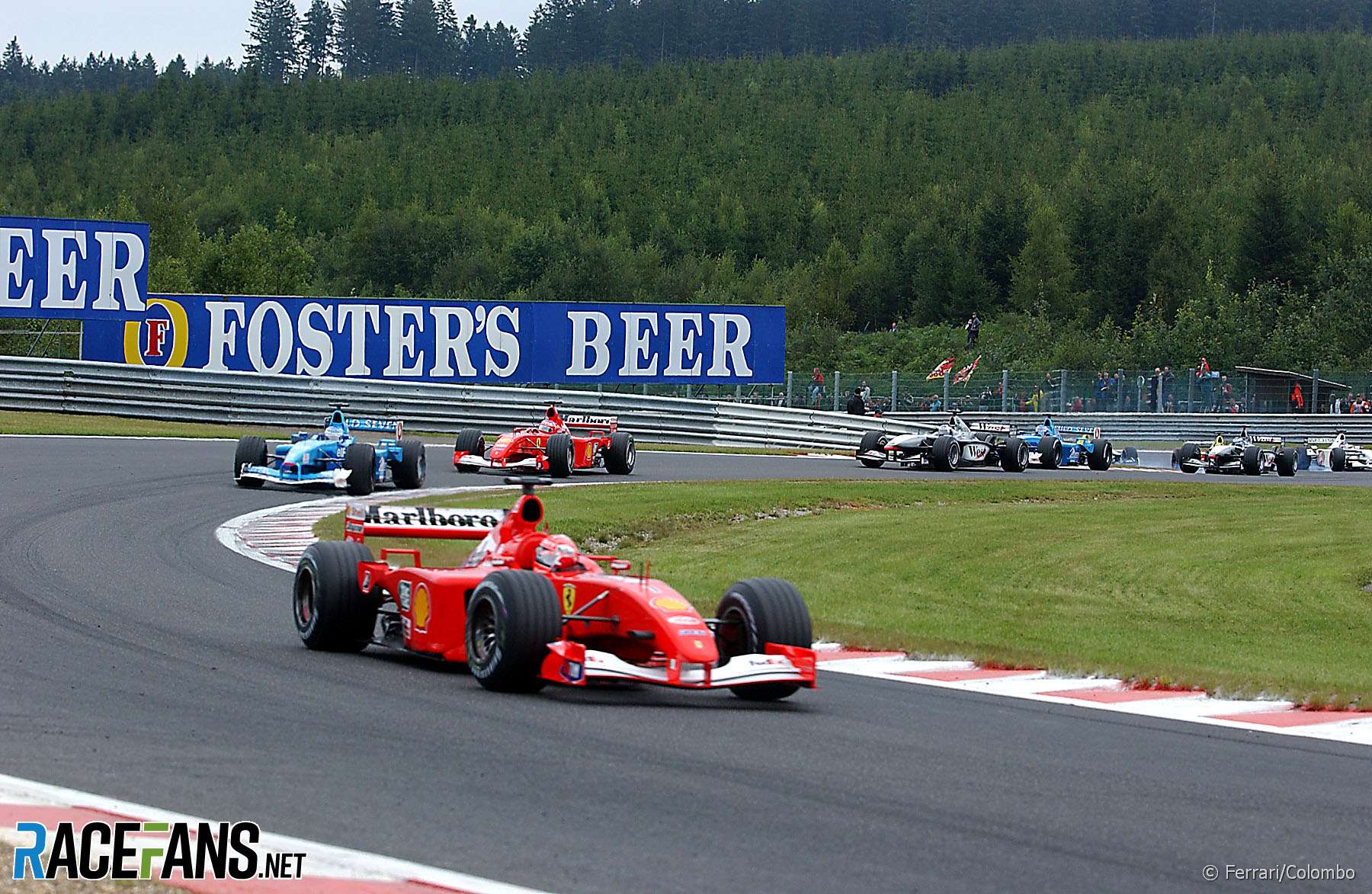 Spa-Francorchamps is one of F1’s oldest venues and also features one of its most unusual starts. The La Source hairpin is frequently the scene of incidents, and the long run to the Les Combes curves gives great opportunities for lap one dices.

Hear are some of the memorable first-lap moments from the Belgian Grand Prix over the years.

Cars were racing around Spa-Francorchamps long before the creation of the modern world championship – this year marks the 90th anniversary of the first Belgian Grand Prix. The original layout was high-speed and high-risk – most of its corners were taken flat-out or with a slight lift, and the circuit bordered by trees, telegraph poles and buildings.

The start/finish line was on the drop approaching Eau Rouge, one of the few corners which remains on the present track, albeit in a more open form than in this picture, where the bridge over the stream which gives the corner its name is visible.

In this picture Peter Collins (number eight) leads Eugenio Castelloti (number four) in a pair of Ferrari-run Lancia D50s. Stirling Moss led them up the hill in his Maserati 250F, but after he retired Collins took the victory. Chris Amon’s Ferrari, sporting some of the first wings to be seen on an F1 car, leads the field to Eau Rouge at the start of the 1968 race. He was taken out of contention by his customary ill luck on lap nine when the oil radiator failed on his 312. By that point John Surtees was leading for Honda, but a suspension breakage soon accounted for him, too. Jackie Stewart assumed the lead in the second half of the race but ran out of fuel on the last lap and had to stop.

The driver who ultimately profited was Bruce McLaren who claimed his final win in a world championship event – and his team’s first.

Two years later, following the deaths of McLaren and others, F1 quit Spa after the drivers objected to its rising risks in the face of ever-escalating speeds. They eventually returned to a shortened version of the track in 1983. By 1989 Spa had become the permanent home of the Belgian Grand Prix. The track may have been shortened, but the weather changed little, as in 1989.

By now the start/finish line had been relocated to the approach to the La Source hairpin, making for one of the most difficult first corners of the season. Ayrton Senna predictably crushed the field, though as the track dried he found Alain Prost growing larger in his mirrors, who was in turn being pressed by Nigel Mansell’s Ferrari. Despite much better conditions, it took three attempts to get the 1990 race started due to first-lap crashes – the second destroying Paulo Barilla’s Minardi. In didn’t keep Senna from taking his third straight win at the track – a run he continued the following year. Alain Prost got to the first corner first in 1993 but a slow pit stop allowed team mate Damon Hill to snatch the win. Michael Schumacher then demoted Prost to third as he fought back after a poor start from sixth on the grid.

Twelve months later Rubens Barrichello took a shock pole position after a damp qualifying session. The Jordan driver was at pains not to get involved in the fight between championship contenders Hill and Schumacher. The latter took the chequered flag first but was later disqualified, giving Hill a back-to-back triumph. The 2001 start was a comedy of errors. First Heinz-Harald Frentzen – who’d qualified his Prost a brilliant fourth on the grid – stalled, causing an aborted start. Pole sitter Juan Pablo Montoya then lost his engine too, leaving two empty spots on the first two rows which were now occupied by the Schumacher brothers, Ralf ahead of Michael.

When the start was finally given Giancarlo Fisichella made a great getaway from eighth on the grid (which was actually sixth), putting him on course to score Benetton’s only podium of their final season. Rows over contracts and tobacco advertising meant F1 had to do without its annual trip to one of the world’s best grand prix tracks in 2003 and 2006. When it returned in 2007 the final corner had been given the Hermann Tilke treatment. The tricky La Source hairpin and the rest of the track remained unchanged, however.

Fisichella delivered a shock pole position for Force India in 2009 but Kimi Raikkonen, who lined up sixth on the grid, had a plan. By taking to the run-off at the exit of La Source and using his KERS energy boost he jumped up to third place behind Robert Kubica at Eau Rouge, and the momentum carried him past the BMW as they accelerated out of Raidillon.

Another dose of KERS after a Safety Car restart got him past Fisichella, and on his way to his fourth and most recent Belgian Grand Prix win. But while Raikkonen got away with exploiting the turn one run-off on that occasion, since then drivers have been warned not to do the same.

A dreadful start from pole position for Mark Webber left him sixth at the end of lap one. Lewis Hamilton took the lead and won, while Webber recovered to take second place.

Webber made another dire start the following year, dropping from third to eighth on lap one. Team mate Sebastian Vettel held the lead from pole position initially but Nico Rosberg, whose Mercedes had sat in a cloud of its own brake smoke in fifth on the grid, grabbed second at La Source and passed the Red Bull on the run to Les Combes.

Vettel won the day, however, while Webber again recovered to second despite both Red Bulls pitting within the first five laps due to serious concerns over their tyres. Romain Grosjean became the first drivers since Schumacher in 1994 to be banned from a race after triggering a major crash at the start of the 2012 Belgian Grand Prix.

The Lotus driver squeezed Hamilton hard on the inside as they approached La Source, tangled with the McLaren then skittled into Fernando Alonso and both Sauber drivers, wiping out all four drivers. But of most concern to the stewards was the fact he had “eliminated leading championship contenders from the race”. Hamilton headed the two Mercedes drivers on the grid but Vettel’s tactics at the start were spot on. While Hamilton ran slightly wide in the middle of La Source Vettel lined him up, hit the KERS boost and drafted by into the lead. Meanwhile Greenpeace activists enraged F1 management by revealing a banner opposite the pits as the race began. It was Hamilton who took the advantage at the start last year – but not for long. When pole sitter Rosberg started poorly Hamilton took the lead ahead of Vettel. Once again the Red Bull driver tried to force his way past at Les Combes, but he braked too late and lost the initiative. His team mate Daniel Ricciardo also ran wide.

On lap two Rosberg came back at Hamilton at the same corner and the pair made contact, ruining Hamilton’s race and condemning Rosberg to second behind Ricciardo.