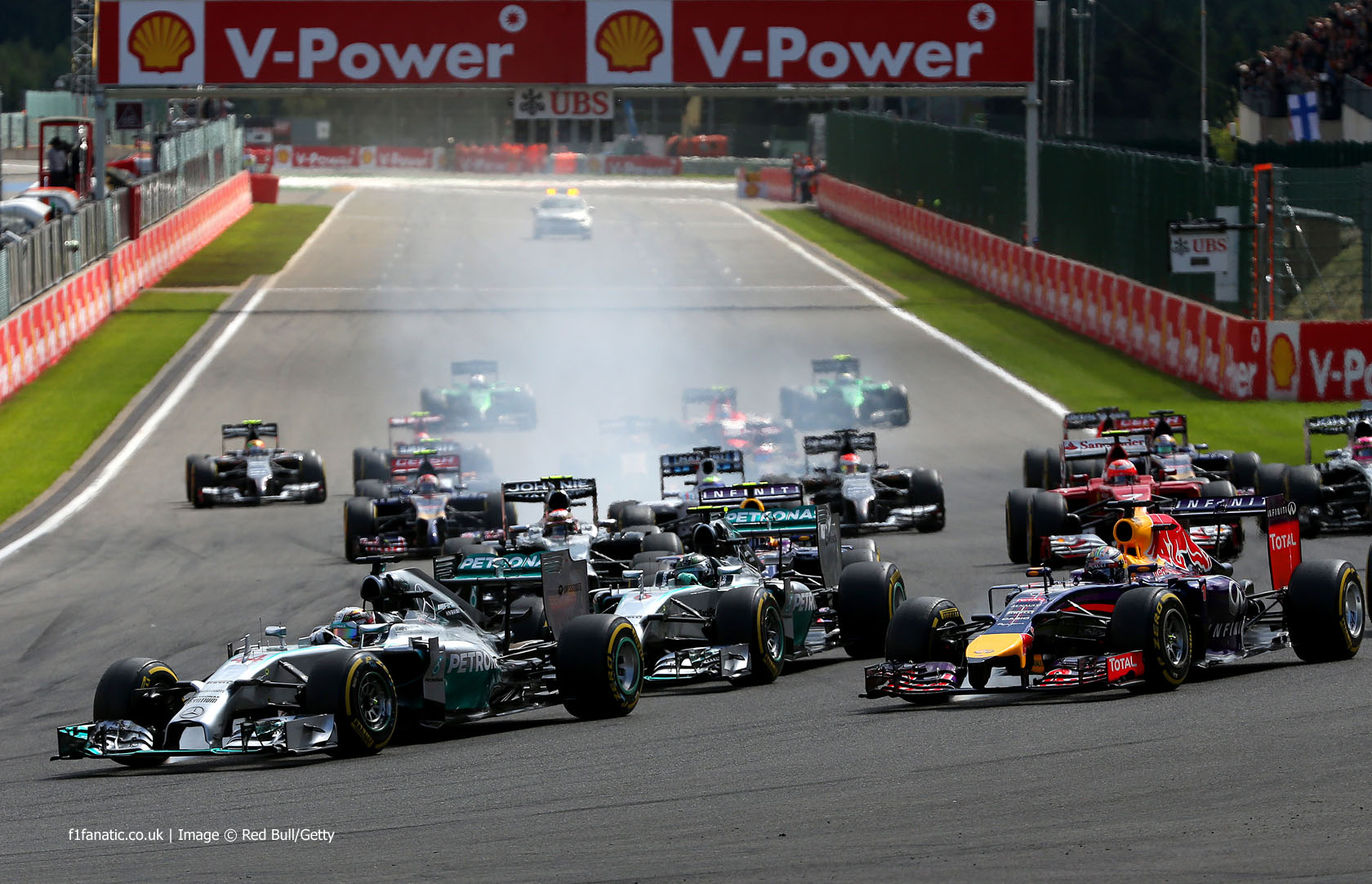 During the first half of the 2015 Formula One championship failed to develop much in the way of a narrative besides another edition of ‘what’s wrong with F1 this year’.

Partly because of that, the second half of the season begins with another attempt to liven things up which could make for an especially exciting start to Sunday’s race.

New restrictions will prevent teams from instructing their drivers via the radio on which settings to select to optimise their starts. It may seem trivial, but the effect could be profound. And as a model for how F1 could make its races more unpredictable without resorting to feeble gimmicks, the principal of giving the drivers greater independence and making their task more challenging is one which could be usefully applied to other aspects of the sport.

The teams have had weeks to prepare, and most if not all will now make the information which was being given to their drivers via the radios available on the steering wheel. However it will be down to the drivers to make use of it while also juggling their brake, tyre and power unit temperatures and other pre-race preparations. No doubt a few ‘filming days’ were arranged over the summer break to help with this.

And it’s not as if all the teams were making perfect starts before. Lewis Hamilton has started the last three races from pole position but wasn’t leading any of them at the end of lap one. Williams mugged Mercedes at Silverstone and Ferrari did it at the Hungaroring.

Spa’s long run from La Source to Les Combes on lap one makes this an especially costly track to have a poor start at. Anyone who has a particularly poor getaway could even find themselves stuttering along in anti-stall mode while the rest of the field leaves them behind.

But however Sunday’s race unfolds, Spa is one of those rare venues where the sheer spectacle of the cars in action alone can more than make up for a processional race. TIt’s a track where “you feel that you’re really driving an F1 car”, enthused Daniil Kvyat. “It’s really long, really challenging, there are some proper fast sections and some properly balls out corners.”

Pirelli has selected its medium and soft tyre compounds for this race, which is the same as last year and also what was used for the previous race in Hungary. Although Spa’s many fast corners means the tyres experience considerably higher loadings around the lap than at the Hungaroring, temperatures at Spa tend to be cooler. And the weather in the Ardennes is notoriously unpredictable – another factor which could produce an exciting race.

Mercedes were stung by their shock defeat in Hungary, not merely as they failed to win but because they failed to get either of their cars on the podium despite fair weather and no significant technical problems.

As Toto Wolff pointed out yesterday, they can’t afford to squander victory the way they did at this track 12 months ago as well, when Nico Rosberg needlessly clipped Hamilton at the start.

Despite Spa’s many long straights and the continued weakness of the Renault power unit – something which won’t be addressed until October at the earliest – Red Bull have some cause for optimism this weekend.

Hungary was by far the team’s best showing so far this year. The team is clearly making progress, and at Spa the cars spend enough time cornering for their downforce advantage to pay off. A splash of rain would only help their cause.

Williams can expect to be near the peak of its 2015 form at Spa, providing it doesn’t rain – the FW37, like its predecessor, seems to have a touch of hydrophobia. But the car is fleet on the straights and Valtteri Bottas made it onto the podium 12 months ago.

Mired in another difficult season and facing possible ejection from Ferrari, Kimi Raikkonen’s last best hope may be to pull a result out of the bag at a circuit where he traditionally excels and is a four-time race winner.

Off the back of their best result of the season so far in Hungary, where Fernando Alonso took fifth place, McLaren heads to Spa with an upgraded Honda power unit in its MP4-30s. They believe they’ve got on top of their reliability problems and they can now access more of the engine’s power. It’s a timely upgrade, with the ultra-fast Monza next on the schedule, but racing director Eric Boullier warned tracks like Spa “won’t play to our strengths” and the team will have to “wait for Singapore and beyond before we can see the fruits of our labours reflected on track”.

Force India had their day of days at Spa six years ago when Giancarlo Fisichella started on pole position and finished second. While the revised VJM08 seems a step forward Hungary brought a bitter blow of two component failures, one of which cost Nico Hulkenberg another points finish. The Hungaroring’s severe kerbs were blamed – any repeat of those problems this weekend would be intolerable.

On his first visit to Spa-Francorchamps last year Max Verstappen swept the board, winning all three of the European Formula Three races. Performances like that were what made him a must-have for Red Bull.

Not that Carlos Sainz Jnr isn’t handy here: he won both Formula Renault 3.5 races at Spa in 2014. So unfamiliarity with the circuit is not an excuse for either of this team’s rookies.

Lotus enjoyed one of their most competitive showings of the season so far at the low-downforce Circuit Gilles Villeneuve, so a solid points finish should be the target for the E23 duo this weekend.

This weekend Sauber’s Ferrari power unit will be upgraded to the specification the factory team has been using since Canada. But that may not be enough to leap them back into contention if they don’t make some progress on the aerodynamic front. Crucially, they have a track-specific wing kit ready for this weekend.

Manor are doing little more than marking time at the moment, though Spa is the kind of circuit which can produce an unpredictable result so both drivers will need to be ready to take advantage of any opportunity which may present itself. 25 comments on “Will new rules shake up the start at Spa?”