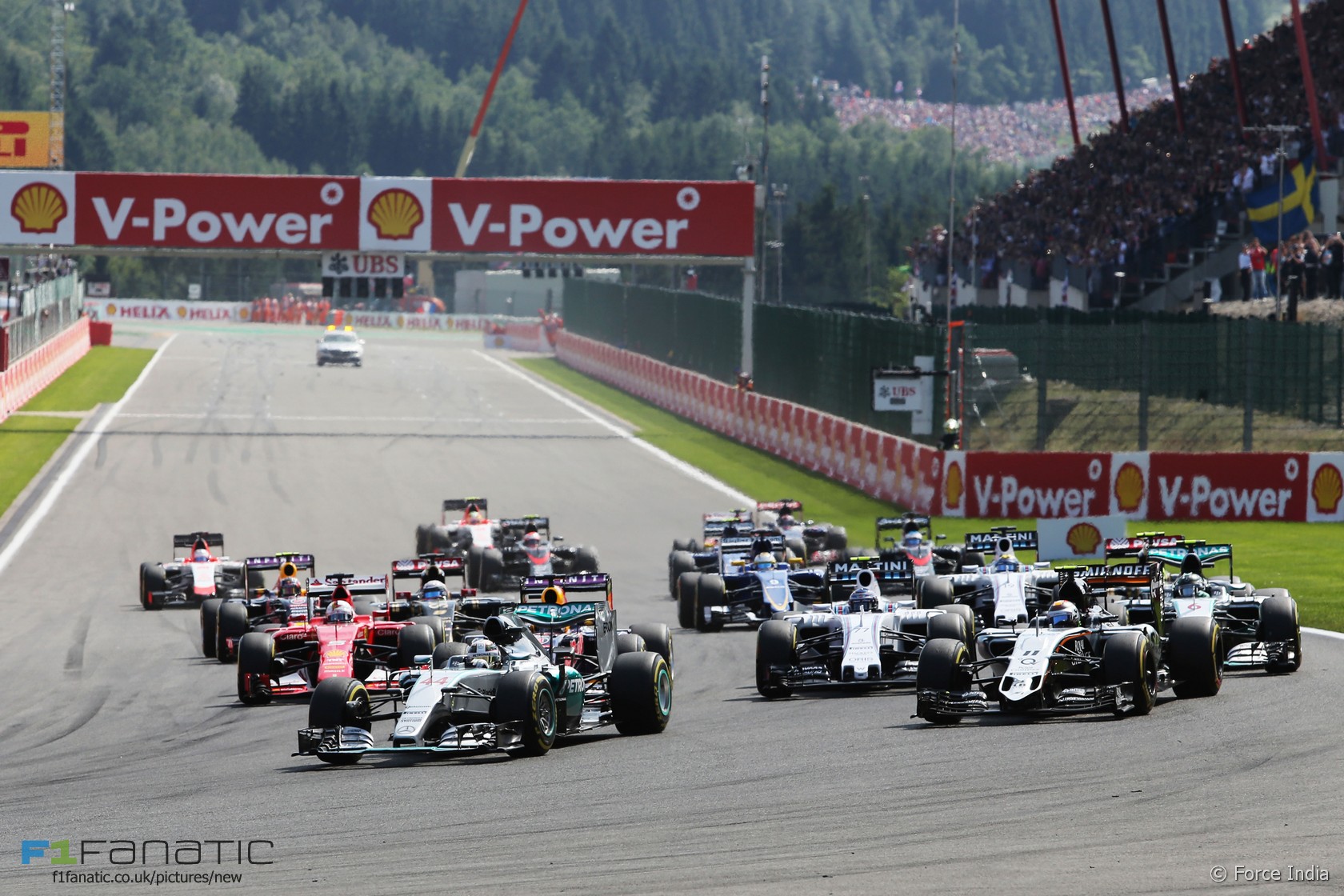 Which F1 driver was the best performer during the Belgian Grand Prix weekend? Lewis Hamilton – It felt like Hamilton was toying with Rosberg in qualifying – the pair looked closely-matched in Q1 and Q2, but come the pole position shoot out Hamilton suddenly produced the best part of half a second’s advantage, most of it found in the middle sector. After a clean start – his first in four races – Hamilton fended off a brief challenge from Perez which constituted the greatest threat he faced all race.

Nico Rosberg – Rosberg didn’t get the rub of the green on Friday: a power unit problem hampered his run in the first session and then, much more seriously, a tyre blow-out pitched him into a 300kph spin in the second. Nonetheless he was quicker than Hamilton in both sessions. But the positions were reversed on Saturday, and in the race he lost three places at the start which left him on the back foot. Despite passing Bottas and jumping ahead of Ricciardo and Perez, he had to settle for second again. Daniel Ricciardo – Red Bull said they wouldn’t be as quick on Saturday as they looked on Friday, and so it proved. Ricciardo was the only one of the pair to reach Q3, where he was the quickest non-Mercedes driver, starting a strong fifth. He started well, passing Bottas and Rosberg, and an early pit stop briefly got him in front of Perez. Having switched to the medium he was potentially in a strong position for the second half of the race, but a power unit problem forced him out on the 20th lap.

Daniil Kvyat – Was given a reprimand after cutting up Nasr in the pit lane during practice. Q2 was very tight and Kvyat missed the cut for the top ten by less than two-tenths of a second. But he made steady progress at the start and was third by lap three, then overhauled Massa. Like Ricciardo an early pit stop helped him continue his progress, and he was fifth at half-distance. After pitting for soft tyres he made his way back to the same position – taking Verstappen, Raikkonen, Massa and Perez – and gained another place when Vettel dropped out. Felipe Massa – After a minor technical problem delayed his start to Q1, a poor final sector in Q3 left him sixth on the grid, promoted one place by Grosjean’s penalty. He lost three places at the start and was passed by Kvyat shortly afterwards as he struggled on the soft tyres initially. Lacking the expected performance on the straights, Massa was also passed by Kvyat before the end of the race and finished where he started.

Valtteri Bottas – Never higher than ninth in practice, Bottas brought it all together when it counted to take third on the grid. However Perez and Ricciardo beat him away at the start, then Rosberg and Vettel came past at the start of lap two. His race was effectively ruined when the team fitted a medium compound tyre to his car by mistake along with three softs, which earned him a drive-through penalty. He still came away with points for ninth. Sebastian Vettel – Failed to improve on his Q2 time in the final session leaving him a sub-par eighth on the grid. However he started well and was up to fifth after passing Bottas on lap two. Staying out on medium tyres after making a single pit stop on lap 15 was undoubtedly a gamble, but one he might have expected would lead to a significant loss of pace at the end of the race, rather than an alarming high-speed tyre failure.

Kimi Raikkonen – Earned his second reprimand of the season after backing off on the racing line to perform a constant-speed aero test while Grosjean was close behind. In qualifying a power unit problem in Q2 left him 14th, which became 16th after a gearbox change penalty. He rose to seventh at the flag in unobtrusive fashion, fending off a late attack from Verstappen.

Fernando Alonso – Having missed almost all of final practice due to yet more technical problems, Alonso lined up behind his team mate. He made the most of the start – rising from last to 14th – and kept in touch with the Saubers for the first half of the race before dropping back, finishing 13th.

Jenson Button – This was always going to be a weak track for McLaren and with little gain being realised from Honda’s revised power unit so far Button could do no better than 17th, one second off the next car, despite producing a lap he was proud of. However his ERS only worked intermittently during the race, periodically leaving him without full power, and after a lonely run he took the chequered flag in 14th. Nico Hulkenberg – Although he had the benefit of having raced at Spa in the World Endurance Championship earlier this year, Hulkenberg missed out on Q3 by less than six-hundredths of a second, making him the only Mercedes-powered driver outside the ten top in qualifying. “On my final lap in Q2 I made a small mistake going into turn one – I just locked the tyres and missed the apex,” he explained. “On top of that we had a small issue with the turbo, which cost us some speed and time down the straights.” His problems weren’t solved in time for the race – his car failed on the grid and he failed to start.

Sergio Perez – Was extremely pleased with his car’s balance and qualified fifth which became fourth after Grosjean’s penalty – his best since Bahrain last year. It got even better at the start as he passed Bottas and Perez – and nearly took Hamilton too. Ricciardo jumped him at the first round of pit stops but Perez used his grip advantage to pass him shortly afterwards. However his car proved too hard on its tyres and he eventually lost places to Grosjean and Kvyat. Nonetheless fifth was Force India’s best result so far this year.

Max Verstappen – Intended to drop out in Q2 due to his impending engine change penalty, but then suffered a power unit problem which forced him out anyway. Gained six places at the start and used a three-stop strategy to maximise his time on the faster soft tyres. That put him in a strong position at the end of the race: he managed to pass Bottas but a last-lap move on Raikkonen didn’t work out, and he finished eighth.

Carlos Sainz Jnr – Very pleased with his qualifying effort after sneaking the Toro Rosso into Q3. But for the fourth race in a row his car let him down, and after spending half the race toiling around at the back the team elected to retire him to save engine mileage. Romain Grosjean – His near-miss with Raikkonen in final practice compromised his flying lap, so his eventual speed in qualifying came as something of a surprise. Unfortunately for Grosjean a five-place grid penalty for a gearbox change dropped him from the second row to ninth. He started well and came good in the middle stint, passing Ricciardo and Perez, which put him in contention for a podium place. He was gearing up to take a shot at Vettel in the final laps when the Ferrari driver’s tyre failed, handing him third.

Pastor Maldonado – Crashed on the approach to Pouhon during practice, much as he did last year, but made it into Q3 and eventually lined up seventh. However two laps into the race his car shut down – the team suspect it was triggered when Maldonado hit a kerb too hard. Marcus Ericsson – Had a substantial crash at Pouhon during second practice after losing control mid-corner, but rebounded on Saturday and beat Nasr into Q2. The pair ran in that order for most of the race, but were unable to make an impression on the rest of the midfield pack. Vettel’s retirement promoted Ericsson to the final points place.

Felipe Nasr – Looked quick in practice but was knocked out in Q3. Not for the first time this year he had braking problems in the race, and a slow puncture in the final stint delayed him further.

Will Stevens – Prevailed in the battle of the Manors in qualifying by little more than a tenth of a second. However contact at the start dropped him behind Merhi, where he finished.

Roberto Merhi – Another driver who raced at Spa earlier this year – in Formula Renault 3.5 – Merhi lost time in final practice due to a hydraulic problem and qualified behind his team mate. However he came out on top in the race, thanks in part to the team managing his strategy to limit the amount of time he spent letting the leaders past. I had several drivers on my shortlist this weekend. First among which was Hamilton, who was peerless in the weekend’s competitive sessions, and once again left me wishing he had more serious opposition from his rivals.

Both Toro Rosso drivers could have had impressive weekends had they not been hampered by technical problems – Verstappen in qualifying, Sainz yet again in the race. Verstappen did well to salvage points from his starting position, depite a last-lap error.

And Perez was in excellent form for Force India, producing a superb qualifying effort and excellent start before tyre problems dropped him back.

However my pick of the drivers this weekend is Grosjean. The Lotus clearly needed a bit of sorting in practice, but his qualifying performance was excellent. He was unfazed by his gearbox change penalty and made the most of running a new set of soft tyres in the middle stint. Yes he inherited third place, but he might have taken it off Vettel anyway. This was top-drawer stuff on a weekend when Lotus badly needed a result.

Who was the best driver of the 2015 Belgian Grand Prix weekend?