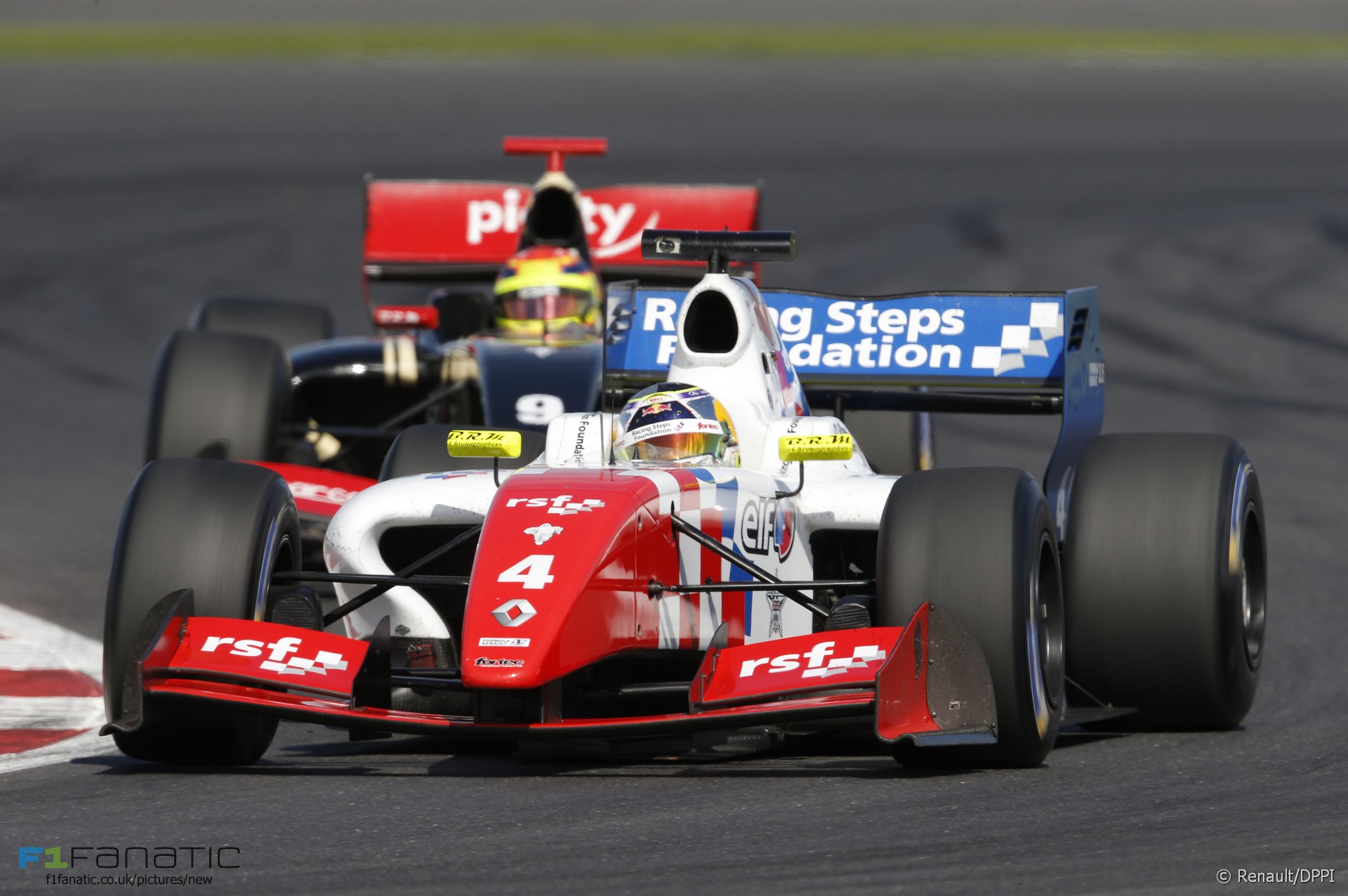 Tio Ellinas kept the title contenders from pole position in race one and dominated proceedings to take victory. Points leader Rowland fell behind Vaxiviere in the early stages but muscled past his rival later on and also demoted team mate Jazeman Jaafar on his way to second place. Vaxiviere had to settle for third.

Vaxiviere set a scorching pace in qualifying for race two – lapping over half a second quicker than Rowland, who he shared the front row with. Having kept his lead at the start Vaxiviere pulled away but the mandatory pit stops proved his undoing. Fortec got Rowland out more quickly than Lotus were able to service Vaxiviere, who was also briefly delayed behind Pietro Fantin.

A Safety Car period temporarily blunted Vaxiviere’s attempt to get back on terms with Rowland, but when the race resumed the pair went at it hard for several laps. However Rowland saw off the thread from his rival and took the win, his fifth of the year. Pietro Fantin was on the podium for the first time since last year, and Red Bull’s Dean Stoneman had to settle for fourth. McLaren-backed driver Nyck de Vries collected a grid penalty for this weekend’s round after tangling with Bruno Bonifacio.

After taking his first pole position for six years – and Motorbase’s first in the series – Mat Jackson scorched to victory in the opening race at Rockingham ahead of Gordon Shedden and Aron Smith. Championship leader Jason Plato finished two laps down after early contact.

Shedden continued the charge in race two as he reversed the result from the opener, while Josh Cook stole third from Adam Morgan on the final corner for his maiden podium. Plato recovered to seventh while Tom Ingram finished tenth and earned reverse grid pole for race three.

Ingram fought valiantly in the final race of the day, but Plato proved too strong as he took a win to limit the damage in the championship. Reigning champion Colin Turkington finished third but is now 33 points off of new title leader Shedden. Plato is now six points adrift with Matt Neal third, 27 points off of the lead with two rounds remaining.

Note: The video above is from qualifying as race highlights are not yet available.

A pair of victories for Felix Rosenqvist allowed him to open up a 34.5 point lead over Antonio Giovinazzi, who failed to finish higher than eighth in any of the three races at Portugal’s Algarve circuit. Jake Dennis enjoyed a strong weekend with a win and two second places, closing the gap to third-placed Charles Leclerc in the points standings.

The EuroFormula Open title fight is in its latter stages. In race one, RP Motorsport driver Vitor Baptista took a dominant victory ahead of Konstantin Tereschenko in second for Campos. Leonardo Pulcini took third and with it the rookie victory after a brilliant overtake to pass Tanart Sathienthirakul who ended up in fifth, while Yu Kanumaru came from 8th on the grid to salvage fourth and minimise the damage in the drivers championship.

Baptista was in the same form in race two, securing a lights-to-flag win ahead of Tereschenko to take the championship lead from the Russian. Polish driver Igor Walilko took his best ever result and debut podium with third.

Hansen was able to save fresh tyres for the semi-final, meaning fresher tyres than his rivals for the final too, and it duly paid off. Sweden winner Matias Ekstrom was in contention, but collided with Johan Kristoffersson at the first corner and spun out. Robin Larsson retired with technical problems mid-race while local hero Jean-Baptiste Dubourg pressured Solberg all the way to the line. WTCC racer Yvan Muller was also in action and showed well, but was spun out of heat two, ruling him out of the final.

Retro car liveries and television graphics were the order of the day at NASCAR’s ‘Throwback’ 500-mile race at Darlington. After a record number of caution periods Carl Edwards came from two laps down to claim his second win of the season.

Season-long Formula Renault 2.0 Eurocup points leader Louis Deletraz saw his advantage slashed to a single point over the course of three races at Silverstone. But that was far from the most dramatic development of the weekend.

Ferdinand Habsburg, a guest driver in the championship, was extraordinarily fortunate to escape serious injury when his car was launched high in the air after hitting Fortec team mate Ben Barnicoat on the first lap of racing action. Barnicoat and the drivers ahead of him had slowed due to the deployment of the Safety Car due to an earlier tangle between Barnicoat and a third Fortec driver – Force India’s 16-year-old karting graduate Jehan Daruvala.

When the race resumed Jack Aitken became the first of three of Deletraz’s rivals to take victory, and was followed later in the weekend by Kevin Jorg and Anthoine Hubert. Lewis Hamilton eased to victory in the Italian Grand Prix and stretched his championship lead as team mate Nico Rosberg retired from third with two laps to go.

Despite not winning either of the weekend’s GP2 races, two podium finishes moved McLaren junior driver Stoffel Vandoorne within reach of the title, and it’s likely he’ll take it at the next round in Russia. Alexander Rossi won the feature race with Mitch Evans taking sprint race honours by passing Arthur Pic on the last lap.

The latter capped a remarkable turnaround for Evans who had been thrown to the back of the grid in the feature race, having originally qualified second, due to a tyre pressure infringement. Hamilton was cleared following a similar investigation after the grand prix, leading Evans to ironically complain: “Love that consistency. Can I have my front row back then please?”

Luca Ghiotto continued his run of pole positions in GP3, taking his fifth from six attempts this season, but threw it away when he stalled on the grid. Emil Bernstorff took the win after an incredible late race charge.

Marvin Kirchhofer won the sprint race on Sunday morning while Ghiotto recovered to take third, minimising the damage that main rival Esteban Ocon could inflict. The ART driver added twice more to his collection of second place finishes – he now has seven in a row.

Which of these races did you watch, and what did you enjoy? Let us know in the comments below.