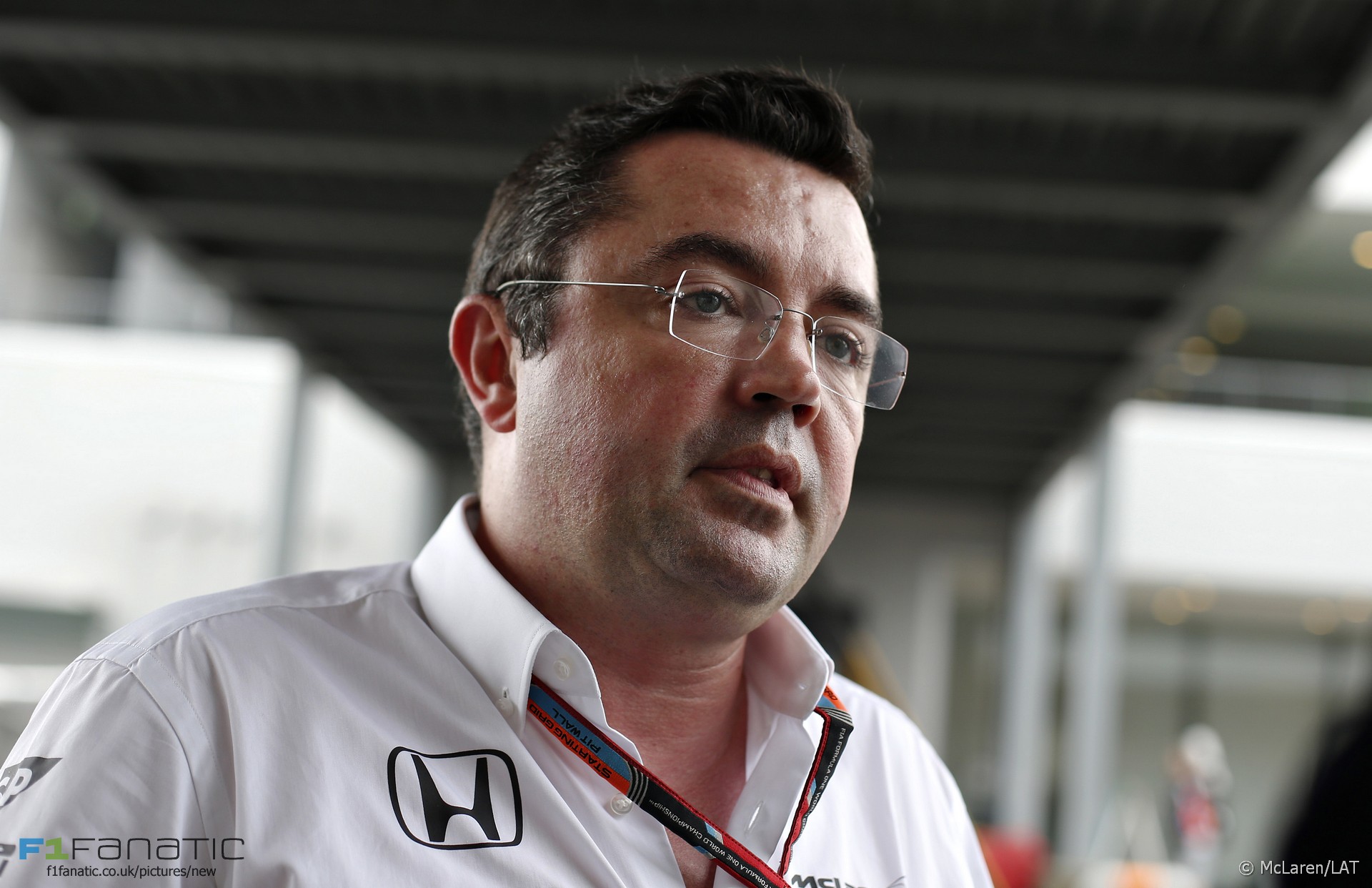 In the round-up: McLaren racing director Eric Boullier says he can “definitely” see a future where teams use 3D-printing to create replacement parts while at races.

Giant ovens and cake: The secretive world where McLaren F1 cars are made (CNN)

"Asked whether 3D printing could mean car parts could be actually made trackside during a grand prix rather than being flown around the world at great cost, Boullier said: 'Yes definitely. This is what we want to achieve.'"

"They've been waiting for us to make a contribution to give them a reason to do something, which we've done two weeks ago. So I don't know."

"The mechanics’ lunch came from a local pizza take-away."

Button can see himself racing in WEC (Autosport)

"I can definitely see myself racing in the WEC in the future."

"I left the paddock last year going to the hospital and spent the night, so definitely when I came back today it was a strange feeling in the paddock. It will be a strange weekend, but we try to do our best to show him respect."

"There's a lot of races still to come, but every Sunday is a new opportunity. It's wrong in this moment to talk about the championship for us."

"“I don't know (what the solution is) because there's a lot of up and down and hills, so it's not so easy. You can even see on the television there are a lot of rivers and this was always a problem with this track since I started, so I really don't see an improvement."

@virtualstatman various other hospitality units and eating with the paddock club staff… None of this their fault, got to feel for them.

It cuts me to the quick seeing my former team scratch a daily existence; especially here in Suzuka, where Benetton won the 1995 championship

By the way, some in McLaren did want to paint the car white with flashes of orange. To reflect Honda and historic McLaren. Ron said no.

Car in Super FJ practice went off at 130R in the wet. First thing that appears is a tractor in front of the barrier. Here of all places. 2/2

The fellow in front of me in the press room is in a deep slumber. So is the bloke over to my left. I hope it's not catching..

Ron, I will never forget what you did for me. Thank you for believing in me, and helping me get to where I am today! Always, your friend, Lewis.

You are the reason I am here. You worked countless hours and several jobs to keep a roof over our heads. All whilst spending your spare time In the shed and garage, learning a new craft to get me across the line first. You stayed correct when others tried to throw you off with anything they could throw at you, like the colour of our skin. You stood by me through it all. Blood, sweat, and tears. You did it for nothing but love, and for that I appreciate you more than you know. As I stand here today, a two time Formula 1 World Champion, I salute the man that made it all possible. Love you Dad. 🙌🏾 #Number1Dad #pridepowerbadassmother

A theory on the Jenson Button situation from @GregKingston:

It sounds a lot more like McLaren are not exercising their option on him, with a much publicised pay increase that takes him to less than 50% of Alonso’s salary, and would instead like to re-sign him afterwards for less. At the same time they’re publicly saying how much they’d him to stay.

Jenson’s clearly been wrestling with a very difficult decision. Few drivers actually get to exit the sport on their terms and walk away from a drive. But he’s closer to the end of his F1 career than the beginning, and the prospect of driving an equally awful car for another year cannot be attractive.

He seems happy though and has reconciled himself with his decision, no matter what that is. As a fan I feel as conflicted as he is – I don’t want him to leave but equally I don’t want to see him lead Manor racing around circuits for another 12 months whilst McLaren try and develop a reasonable car for 2017.
@GregKingston

Fernando Alonso denied Sebastian Vettel a victory at Singapore on this day five years ago. Mark Webber finished third and held on to the championship lead with the top five covered by 25 points with four races remaining.