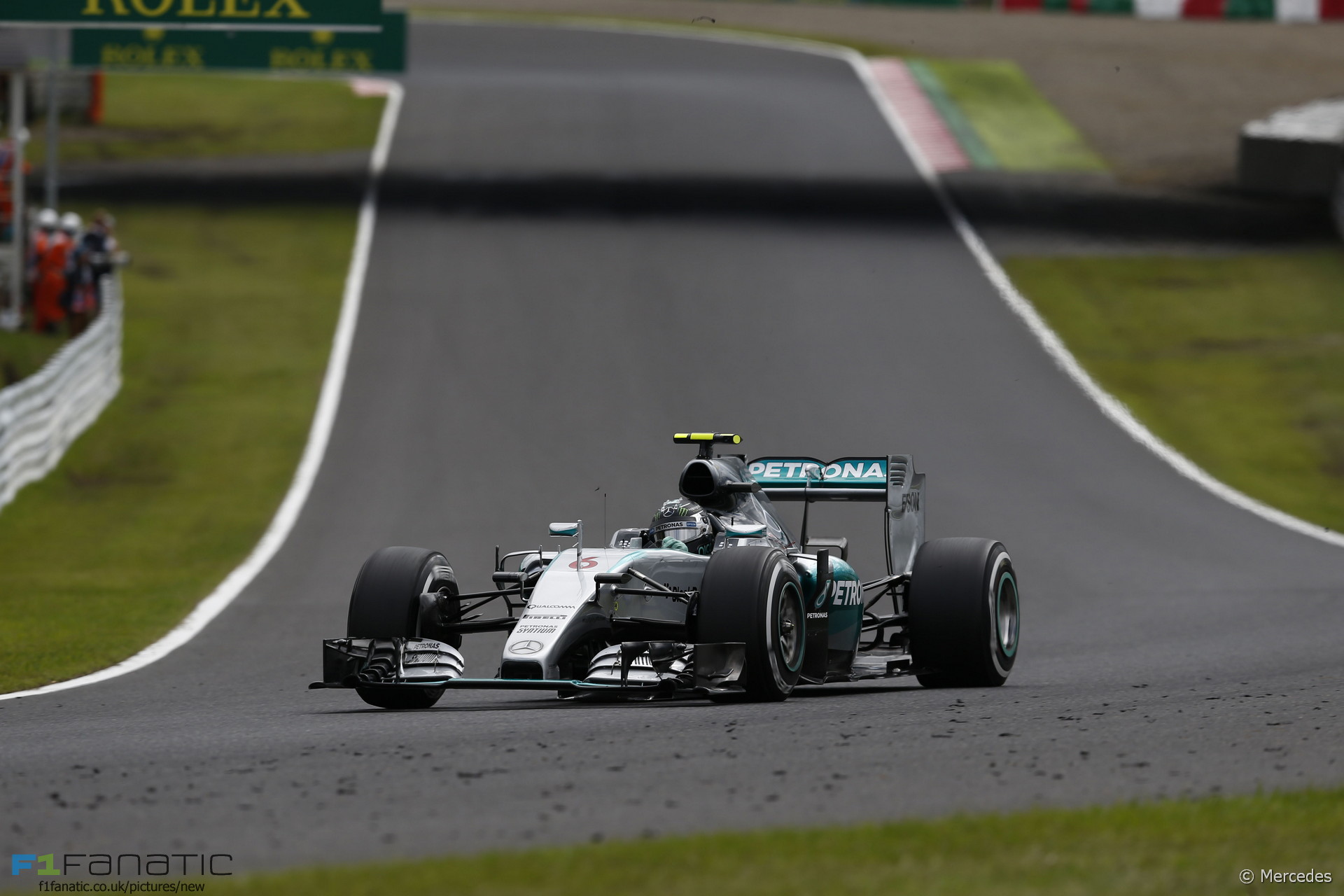 Through the Suzuka’s fearsomely fast turn one, twisting through the Esses and climbing the hill at Dunlop, there was almost nothing to separate the two Mercedes drivers: Lewis Hamilton was a mere one-thousandth of a second quicker than Nico Rosberg on their best qualifying runs.

Over the rest of the lap Rosberg edged it back by hundredths. Hamilton’s sole Q3 run was untidy, and that proved decisive when Daniil Kvyat’s crash brought proceedings to a premature end. Rosberg, therefore, starts from pole position for only the second time this year.

Twelve months ago at Suzuka Rosberg also started from pole position, but was passed on the track by Hamilton in the rain-hit race. But with dry weather and sunny spells forecast for Sunday (after overnight rain) Hamilton won’t be able to rely on his wet weather pace and will likely find it much harder to make a pass on track. Rosberg, naturally, will get first call on Mercedes’ pit stops if he is leading, potentially denying Hamilton another route to first place.

An ideal scenario for Rosberg would be if one of their rivals – perhaps the fleet Williams of Valtteri Bottas – could insert itself between them at the start. That was what happened on the only other occasion Rosberg took pole this year, in Spain, where Sebastian Vettel kept Hamilton behind for two-thirds of the race.

If that doesn’t happen, we could be in for an absorbing battle between the two championship leaders. Hamilton’s Singapore retirement means he can no longer rely on finishing second to Rosberg at every round to clinch the title, so he has an added incentive to put one over his team mate – not that he needs it.

How the race will play out once the drivers settle into their race stints is trickier to read than usual due to the lack of any dry running on Friday. The teams did manage to do some long runs in today’s final practice session (see below) which indicate tyre performance will degrade fairly rapidly.

Teams are expected to prefer two-stop strategies, according to Pirelli, beginning with two stints on the medium tyre which has a pace advantage of around eight tenths of a second per laps. However the lack of dry running on Friday is potentially a concern for F1’s tyre supplier too.

Pirelli has been strictly limiting the pressure and camber settings team may use following the blow-outs seen in Belgium. At Spa the medium and soft tyres were used, as at Monza; this weekend the medium tyre is being used again along with the hard. At Monza Pirelli’s initial conservative limits were revised downwards following evaluations on Friday, but the rain-hit sessions in Japan afforded them no opportunity to do the same.

Teams may therefore find themselves boxed into using more conservative tyre pressures than they would like, so we could see a few deviations from the norm in terms of driver and team performance in the race.

This chart shows all the drivers’ lap times during their longest unbroken stint. Scroll to zoom, drag to pan, click names to highlight, right-click to reset:

Will Rosberg exploit this chance to take points off Hamilton? Who will emerge as ‘best of the rest’ from the chasing pack? And are points possible for the out-of-position Max Verstappen and Daniil Kvyat?

Share your views on the Japanese Grand Prix in the comments.