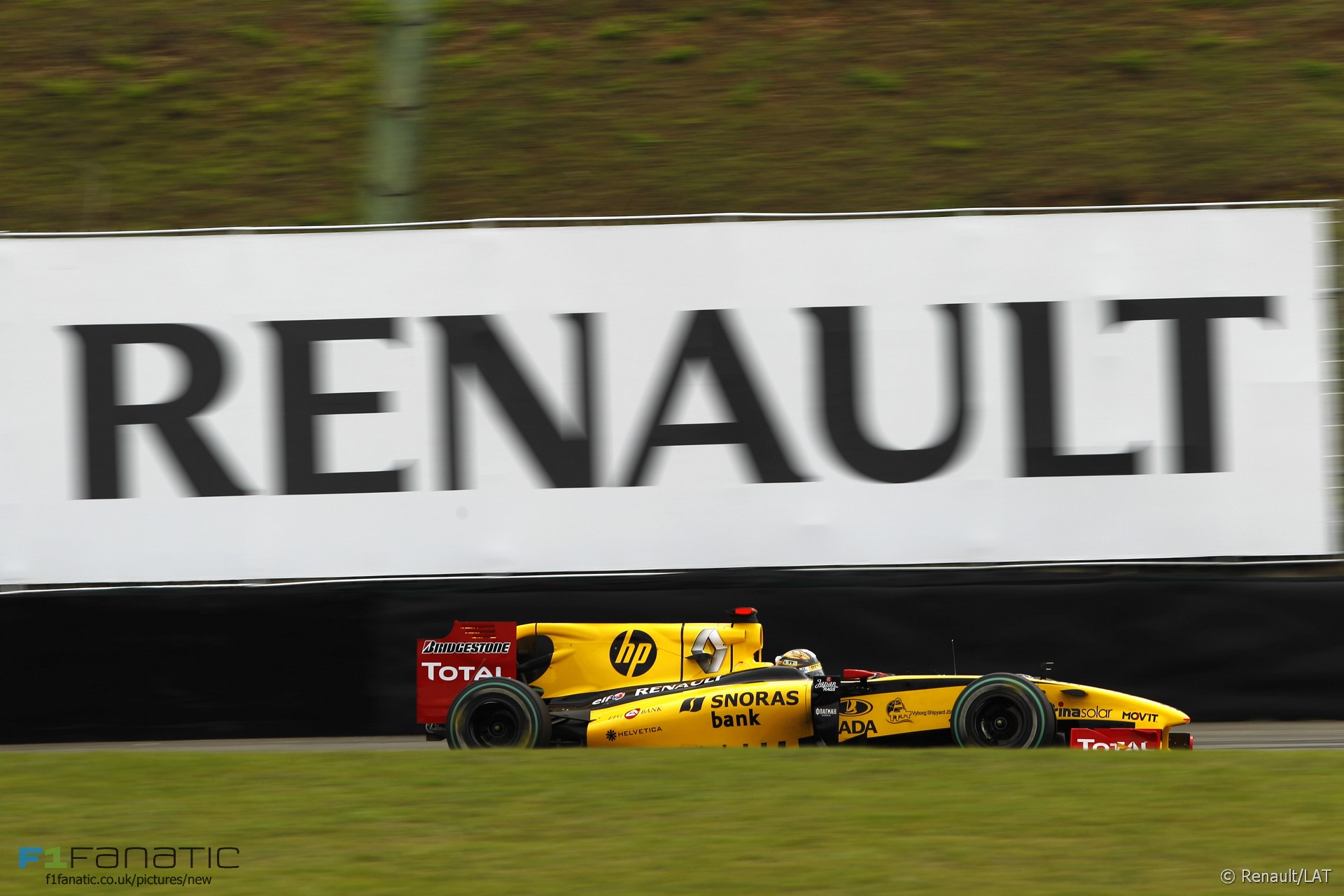 Renault this week announced its intention to buy the Lotus team But their return to Formula One as a full constructor remains to be confirmed.

They didn’t move quickly enough to retain the services of Romain Grosjean, who made his F1 debut with the team the last time they competed in Formula One, but has jumped ship to Haas for 2016.

Renault believes its F1 past appearances entitles it to the same kind of historic payments Bernie Ecclestone gives to other long-standing competitors such as Ferrari – the only team to have competed in Formula One every year since the championship began. But while Renault’s F1 participation dates back almost 40 years, it has come and gone more than once during that time.

Renault arrived in the middle of the 1977 season with an innovation which revolutionised the sport. The potential for teams to use a 1.5-litre turbocharged engines instead of a three-litre normally aspirated power plants had been in the rules for over a decade, but the French manufacturer was the first to take advantage of it.

It took the best part of two years for their plan to bear fruit. Jean-Pierre Jabouille gave the team their first victory on home ground in 1979. From then on if Renault were strong anywhere, they were strong at home: Alain Prost took his maiden victory in 1981, team mate Rene Arnoux controversially kept him from a repeat win the following year, and Prost triumphed again in 1983.

Had Renault been able to sustain that kind of performance across a full season, championships would surely have followed. but poor reliability cost them victory after victory in the early eighties. Ferrari, the quickest team to follow Renault’s turbo lead, beat them to the first turbo-powered championship title in 1982. The following year Prost arrived at the final race leading the championship, but Renault had failed to heed his warnings about the rising threat from Brabham-BMW, and Nelson Piquet snatched the title from him at the final race.

In the wake of that stinging defeat Renault sacked Prost, but his point about the team’s performance proved correct when they endured a win-less 1984. Worse, they were beaten in the constructors’ championship by engine customers Lotus. A management shake-up for 1985 failed to turn the ship around, and with the parent company needing to reduce costs the F1 team was closed.

By 1985 Renault was also supplying engines to Ligier and Tyrrell as well as Lotus. It pledged to see out its contracts but their deal with Lotus for 1987 was scrapped as Ayrton Senna was eager for a switch to Honda power.

Senna had taken seven Renault-powered pole positions at the wheel of his Lotus in 1985, and went one better the following year. However he scored just two wins in each of those seasons as rival engines from TAG and Honda beat Renault’s for fuel economy and performance despite Renault’s pneumatic valve advances.

With Lotus taking Honda power for 1987, the final two years of the turbo era did not feature any cars powered by the company which had started it a decade earlier.

Ironically, the turbo pioneers returned immediately as engine suppliers when F1 switched to normally-aspirated engines for 1989. Williams were the first takers for Renault’s 3.5-litre V10, and claimed a pair of wins in the first year of what would prove a highly successful partnership.

The performance and reliability of Renault’s engines was an often underrated part of Williams’ dominance in the early nineties with their active suspension cars. The departure of Honda at the end of 1992 also removed Renault’s biggest rival from the equation.

From 1992 until their withdrawal at the end of 1997 Renault contributed to championship success in either the drivers’ or teams’ competition and in the last three years they won both. In 1995, when Benetton joined Williams in using their engines, Renault powered every race-winning car with just one exception in a year when engine capacities had been downsized to three litres.

Renault had conquered the F1 engine game in the mid-nineties. For their second return to they craved the success as a full constructor which had eluded them. At the end of 2001 customer team Benetton was rebranded as Renault, and the team employed a novel, extra-wide 111-degree V10 engine in an attempt to steal a march on their rivals.

That proved unsuccessful, and its replacement with a more conventional 72-degree put them on the path to success. Everything fell into place in 2005: close collaboration with tyre supplier Michelin helped them suss the unusual ‘no-stop’ tyre rules, Pat Symonds headed a team which was tactically razor-sharp, the RS25 engine blended power and reliability, and Fernando Alonso’s talent blossomed in his fourth year of service for the team. McLaren’s car was often faster, but Renault’s held together and delivered both titles.

Three developments threatened to destabilise the team during the off-season: Alonso had signed to join McLaren in 2007, new rules demanded an entirely new V8 engine, and tyre changes were allowed again. That made their repeat championship triumphs all the sweeter: Alonso prevailed in a year-long fight with Michael Schumacher.

However in 2007 the team found themselves without Alonso or Michelin and ended the year win-less. Although Alonso returned to take two wins the following year the first of those, at Singapore, was tainted 12 months later when the sordid details of Crashgate emerged. Team director Flavio Briatore was shown the door along with Symonds, and Renault quickly moved to sell its team to Genii, although it wasn’t renamed as Lotus until 2012.

The shriek of a Renault engine being revved to destruction in the Interlagos pit lane heralded the end of F1’s V8 era. Thanks to their collaboration with Red Bull, Renault’s engines had powered four consecutive constructors’ and drivers’ champions.

How quickly that was all forgotten. Mere months later, Red Bull team principal Christian Horner was holding his engine partner publicly responsible for their collapse in form. Three opportunistic wins were salvaged from their 2014 campaign – along with the runner-up spot in the teams’ championship – but when the team’s form slumped further this year the writing was on the wall.

Divorce between Red Bull and Renault is now a formality. Yesterday Mercedes confirmed they will supply Manor with engines next year, indicating that Lotus will no longer receive their hardware, giving them little alternative if Renault do not complete their takeover of the team.

For Renault, the question is one they have faced before in Formula One: Will it be all or nothing?