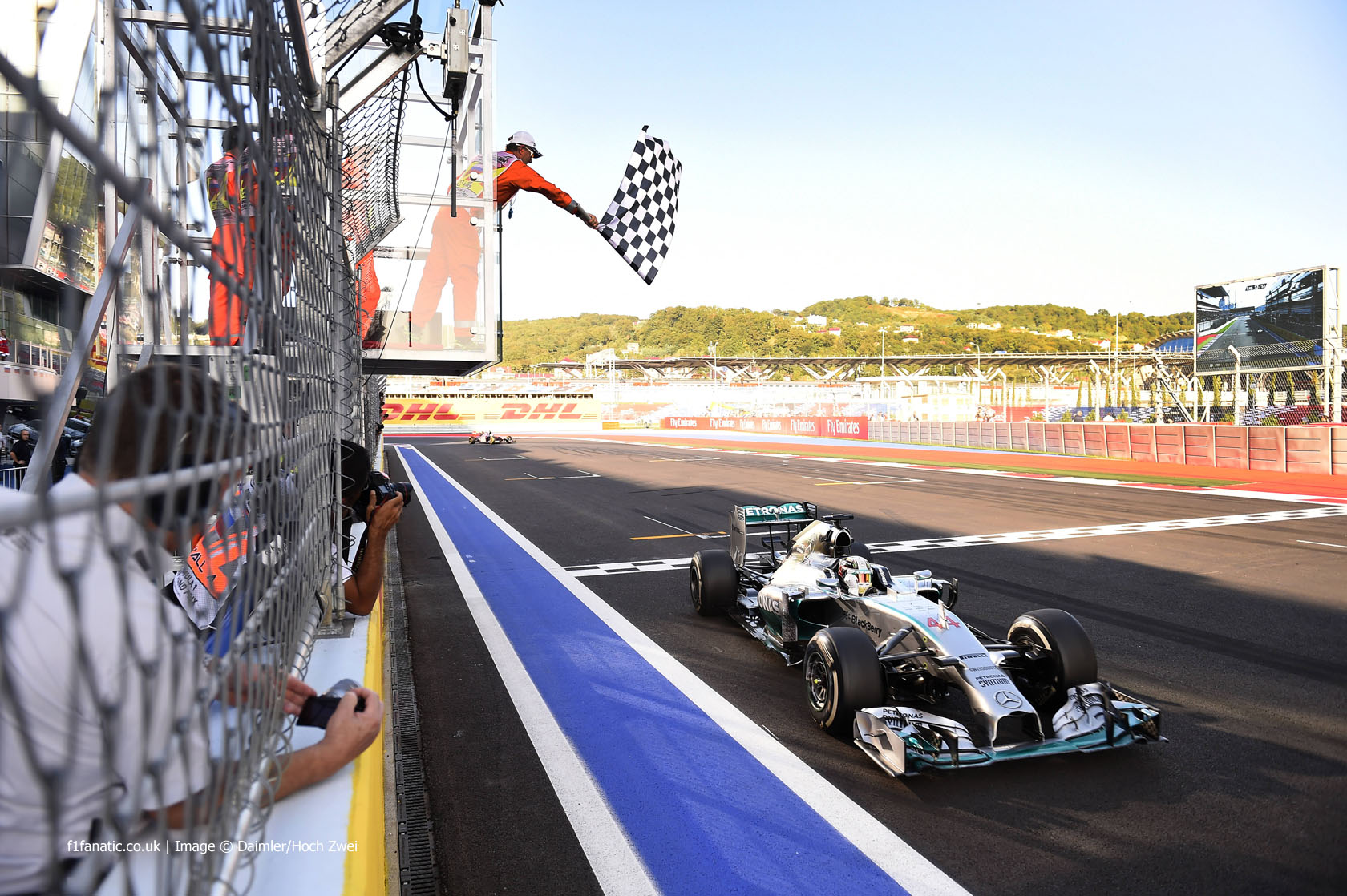 Mercedes is poised to clinch its second constructors’ championship title this weekend at the same venue where they won it last year. The reigning champions need only to increase their margin over closest rivals Ferrari by three points in Russia to retain their crown.

That kind of points haul hasn’t been difficult for the three-pointed star to come by at most weekends this year. But could Sochi trip them up the same way another temporary street circuit – Singapore – did?

“This was a tricky weekend last season with a new circuit to learn and fresh tarmac which produced slightly unusual behaviour from the tyres,” he said.

“This year we have moved one step softer on the compounds to bring the soft and supersoft into play – perhaps influenced by Nico [Rosberg] running almost the entire race last year on a single set of tyres. One year on, the track surface will have weathered differently so we must ensure we have all eventualities covered.”

Sochi’s climate is considerably warmer than the rest of Russia and even in winter average minimum temperatures are above freezing point. The track hasn’t experienced the kind of harsh winter conditions other F1 venues such as the Circuit Gilles Villeneuve in Montreal do. Having studied recent samples of the track Pirelli has determined its characteristics have changed little and the surface remains smooth, so the teams are likely to find it still offers extremely low levels of grip.

Mercedes explained their Singapore struggles being down to the unusual nature of the track, which is one they hadn’t dominated at in 2014: In a season where they were 0.881s faster than their closest rivals on average, Mercedes’ margin in Singapore was just 0.164s. In Russia it was a more typical 0.592s.

However that may change as Pirelli is bringing different tyres for this year’s race. Having understandably played it safe for the first event 12 months ago, Pirelli has been emboldened to bring its softest compounds this year. If Mercedes do run into trouble this weekend Ferrari should be well-place to take advantage as they have tended to perform well on this rubber.

It remains to be seen whether the softer tyres will inject some action into what F1 Fanatic readers deemed the worst race of 2014 by far. The Sochi Autodrom drew comparison with the little-loved Valencia street circuit. But even that track managed to produce one memorable race, and given the right circumstances any venue can serve up a good grand prix.

Rosberg said he took heart from his pass on Valtteri Bottas and subsequent overhauling of Sebastian Vettel in Japan – but he still failed to capitalise on an opportunity to take points off his team mate. At this late stage Rosberg needs more than just a DNF for Hamilton to become a serious title threat – he has to raise his game.

This was a tough race for Red Bull last year, who managed a best of seventh. Daniil Kvyat shone in qualifying last year for Toro Rosso but struggled in the race and arrives at his home event this year needing to bounce back after a few indifferent performances.

Bottas kept the Mercedes pair honest at Sochi last year, coming close to taking pole position. “We were close to Mercedes in Japan and I think we can be close again in Sochi just like we were in 2014,” he said.

The Ferraris have qualified strongly on the super-soft tyre this year so keep an eye on Sebastian Vettel on Saturday. A repeat of his sensational Singapore pole position seems unlikely, but that wasn’t the first time he’d beaten a Mercedes in qualifying this year.

Sochi will offer McLaren little respite from the usual grind of extracting the most from its uncompetitive Honda power plant. This is one of the toughest tracks for fuel consumption which, as we saw in Canada, is another of the team’s major weaknesses. Jenson Button has shown faith in the project by continuing with the team for 2016.

The team has been competitive thanks to its improving VJM08 but accidents have prevented them getting both cars home in points-scoring positions recently: Sergio Perez was hit at the start in Japan and Nico Hulkenberg tripped over Felipe Massa in Singapore. If its drivers can stay out of trouble they should be solidly inside the top ten at a track like Sochi.

Toro Rosso excelled in qualifying last year where they managed to extract good traction from their tyres on the low-grip surface, but come the race their fuel consumption weakness was exposed. Neither driver has prior experience of Sochi, so expect to see both piling on the miles in practice.

Lotus is in a kind of limbo as it waits for Renault to complete its takeover of the team. In the meantime Romain Grosjean, who already has one foot out of the door, reckons “it could well be a strong race for the E23” this weekend.

Both drivers raced at Sochi last year – Felipe Nasr in the GP2 support events. The team’s recent upgrade package doesn’t seem to have delivered the results the team were hoping for as yet, but as they lack a simulator it may be that they simply need more track time.

Roberto Merhi will be back alongside Will Stevens this weekend as Alexander Rossi is racing in GP2. Exciting times lie ahead for this team with their recent confirmation of Mercedes power and Williams support for next season, but points are unlikely before then.

If you’re heading to Russia for this weekend’s race, we want to hear from you.