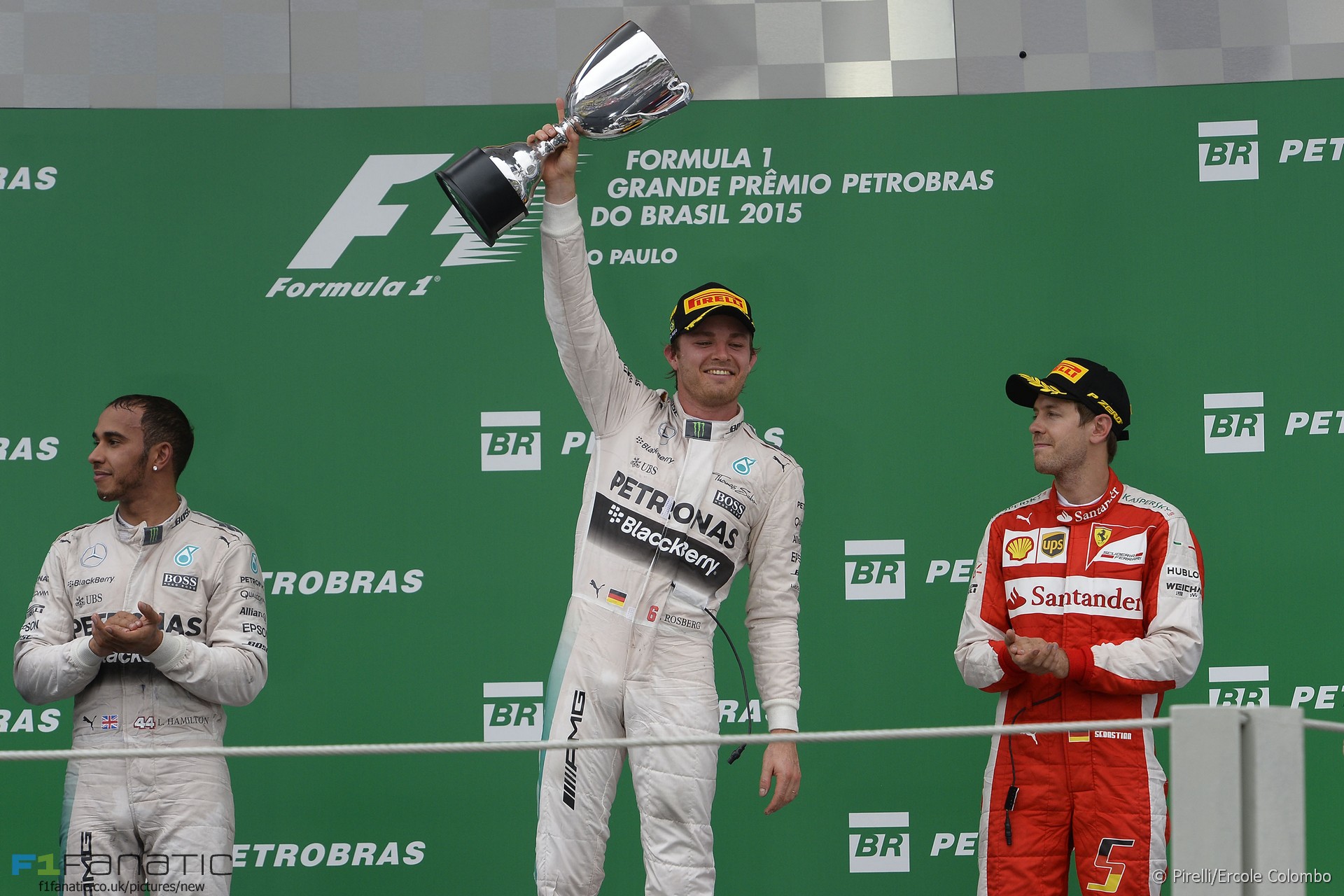 Nico Rosberg is having a fine end to the season, with two wins and five pole positions in a row.

The latter is a personal best for him and is something only 11 other drivers have done – one of which was Lewis Hamilton earlier this year.

Win number 44 for Mercedes was not taken by their car number 44: Rosberg’s 13th career victory puts him level with Alberto Ascari and David Coulthard. He also set his 21st pole position.

Hamilton beat him to fastest lap, however, taking his 27th. It was also his seventh fastest lap of the year, meaning he now has a clean sweep of the pole position and fastest lap trophies to go with his world championship.

Sebastian Vettel took third place, meaning he shared the podium with the Mercedes drivers for the ninth time this year.

Rosberg also became the first driver this year to win a race with a three-stop strategy, and the first in ten years to take back-to-back Brazilian Grand Prix victories. Juan Pablo Montoya was the last driver to do this, winning in 2004 for Williams and 2005 for McLaren.

Despite having started from the front row four times at Interlagos, Brazil remains one of few events on the current calendar where Hamilton is yet to win, along with Austria and Mexico. Before the race he said he wanted to win as a “salute” to his hero Ayrton Senna.

With one race left to run the top three places in the drivers’ championship cannot change and nor can the top five positions in the constructors’ championship. This will remain the case regardless of with Felipe Massa’s eighth place is reinstated.

Force India are therefore confirmed in fifth place – the highest they have finished since the team entered F1 in 2008. They only did better than that on two occasions when they were Jordan: fourth in 1998 and third in 1999. They also finished fifth in their first year of competition in F1, 1991.

Nico Hulkenberg equalled his best starting and finishing positions of the year, fifth and sixth respectively, the same he scored in Austria.

And speaking of unwanted records, with one race to go Pastor Maldonado has regained the lead spot in the ‘most driver penalties’ table. He picked up his eighth of the year after tangling with Marcus Ericsson.

Have you spotted any other interesting stats and facts from the Brazilian Grand Prix? Share them in the comments.