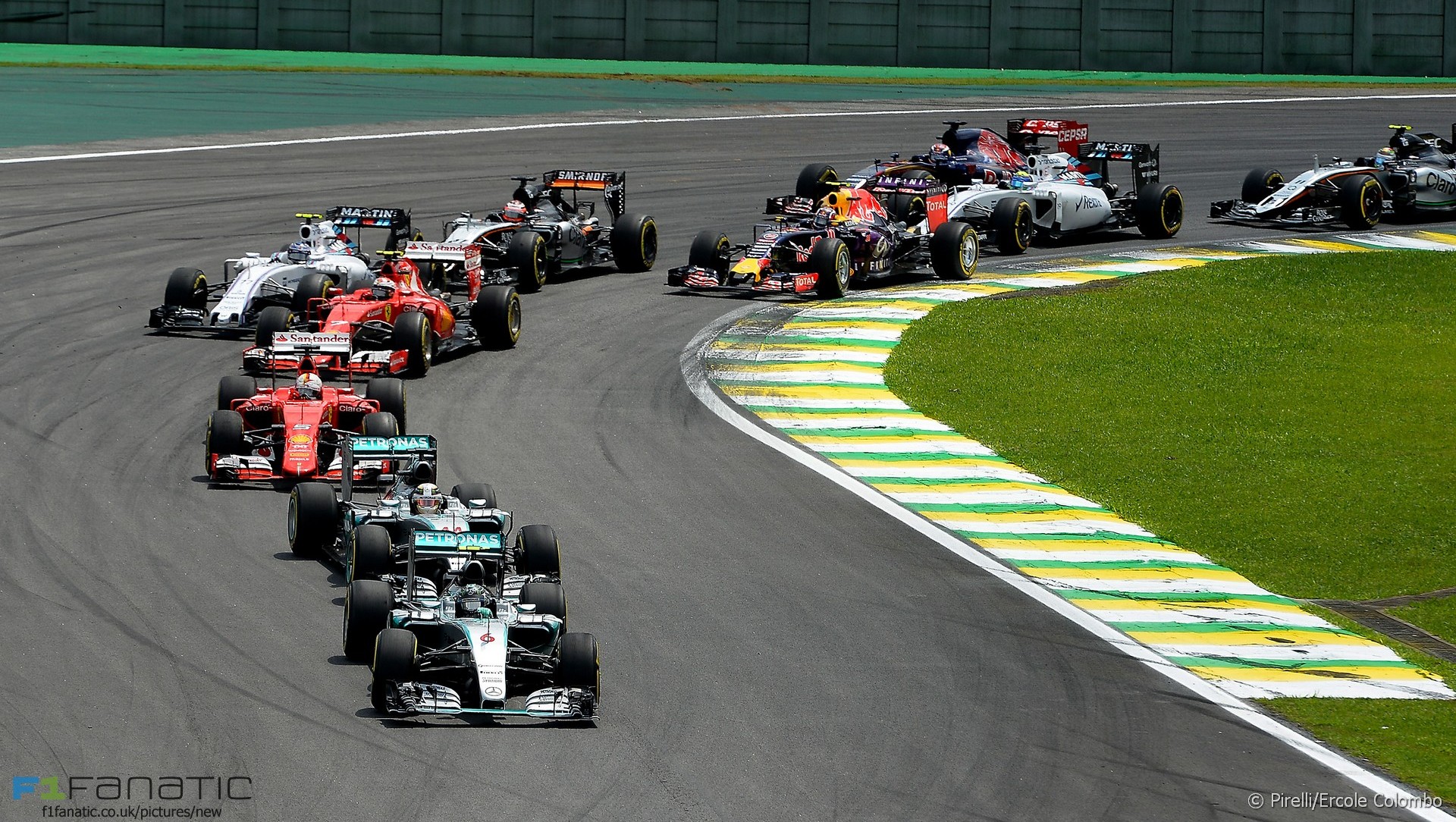 Lewis Hamilton – “I really need to improve my grid position this time because that can heavily influence the race,” said Hamilton on Friday. He didn’t – Rosberg pipped him for the fifth race running after Hamilton’s final practice preparations were disrupted by a technical problem and a spin. He threw everything at his team mate in the second stint but was never able to force Rosberg onto the defensive, and with no strategic alternative being offered he was destined for second.

Nico Rosberg – Having been behind Hamilton in Q1 and Q2 it seemed his run of poles might come to an end. But a fractionally more committed pair of laps in Q3 saw him come out ahead in a super-close fight between the pair. Just like last year Hamilton appeared to have the edge on speed in the race, but Rosberg clung on to his track position advantage early in the race and pulled out a lead in the final laps.

Daniel Ricciardo – Used Renault’s revised engine but might have had cause to regret it as he found himself 0.4kph down on Kvyat in qualifying. That plus a ten-place grid penalty left him 19th on the grid. With no help from Safety Cars and little benefit from the new engine – he was 0.4kph down on his team mate in qualifying – the points never looked likely.

Daniil Kvyat – Described his Saturday effort as “probably one of my best qualifying laps this year” having struggled in the second sector on Friday. He was jumped by Hulkenberg at the first round of pit stops and thereafter had an uneventful run to seven.

Felipe Massa – Described this as a “race to forget” even before he was thrown out of the results for having illegal tyre temperatures. Ill at ease in the car from the word go, he scraped through Q1 and Q2 to claim a place in the top ten, but slipped back from his team mate in the race.

Valtteri Bottas – Despite picking up a three-place grid penalty for passing Felipe Nasr when the red flags came out in second practice – which Bottas felt was unavoidable – he still started in front of his team mate. A rapid start put hi on the tail of the Ferraris but he lacked the pace to get ahead of them.

Sebastian Vettel – Said there was only a few hundredths of a second left in his car after Q3, while the gap to Mercedes was a yawning half-second around one of the shortest tracks of the year. However in the race Vettel’s pace was more promising, particularly after he switched to a three-stop strategy to keep Mercedes under pressure.

Kimi Raikkonen – Had a high-speed spin during practice but recovered to start alongside his team mate, thanks to the penalty given to Bottas. Had to switch engines before the race, taking an older unit to avoid a penalty, but with the team still optimising the settings on the new unit after the race had started he slipped back. Stuck to a two-stopper, letting Vettel by at one stage.

Fernando Alonso – Headed to Brazil hoping for an end to his recent reliability problems – and got the exact opposite. His car broke down in practice and again during qualifying, before he could set a competitive time. Frustrated by his team’s strategy during the race, he at least saw the chequered flag this time.

Jenson Button – Confessed to struggling with his car in practice – Alonso’s problems meant Button had to shoulder more of the development work – but felt it was running better in qualifying, even though he couldn’t make it out of Q1. Like Alonso he started well but was easy meat for more powerful cars on the main straight.

Nico Hulkenberg – Matched his best grid position of the year at a track where he has often excelled and set himself a target of at least holding on to the position in the race. A less than great start put paid to that, but clever use of the undercut got him back in front of Kvyat. His sixth place secured fifth in the championship for Force India.

Sergio Perez – Said he wasn’t comfortable with the car all weekend, and admitted to an error on his last run in Q2 which cost him a place in the final ten. His difficulties continued into the race – unusually he pitted once more than his team mate and found himself passed by cars which were slower in a straight line as his tyres went off quickly.

Max Verstappen – Got into Q3 for the ninth time this year, which he hadn’t expected. He did his usual combative work in the race to make up for the Toro Rosso’s lack of punch on the straights – his pass on Perez in the Senna S was a particular highlight. Ninth place was his reward after Massa’s penalty.

Carlos Sainz Jnr – When will Toro Rosso get on top of the reliability problems which have cost Sainz demonstrably more than his team mate? He was distracted by an electrical problem during qualifying which meant his steering wheel display wasn’t working, and consequently failed to make it into Q3. His car failed seconds after leaving the garage before the race start, and after he was fired up in the pits he made it just four corners before the wheels locked solid, ending his race.

Romain Grosjean – Understandably affected by the events of Friday in Paris, Grosjean nonetheless was Lotus’s highest qualifier as usual, though a spin prevented a better result in Q2. He got his head down during the race, passing his team mate and Verstappen en route to eighth.

Pastor Maldonado – Couldn’t get the back of the car to behaved as he wishes, made several set-up changes, and ended up failing to get out of Q1. He gambled on starting the race on medium tyres but was given a five-second penalty after carelessly hitting Ericsson. He lost places to two of his rivals in the closing stages before being promoted to the final point when Massa was disqualified.

Marcus Ericsson – Unremarkable in qualifying, then didn’t make a great start in the race. Contact with Maldonado then ruined his race. “He hit the back of my car, spun me around and we had to pit to check for damage,” said Ericsson. “I lost around 30 to 40 seconds.”

Felipe Nasr – Didn’t look capable of making the cut for the top ten but qualified a strong 11th before picking up a penalty for impeding Massa. With few retirements, points never looked likely, though he battled convincingly with Grosjean in the opening laps and got a big cheer for his pass on Button.

Will Stevens – Said he was focussing on his race set-up instead of qualifying after ending up behind his team mate. This seemed to pay off as he led his team mate home after taking care of his rear tyres.

Alexander Rossi – On his last race weekend in the car this year, Rossi edged Stevens in qualifying. However he complained of “terrible” balance in his seconds and third stints and said he was powerless to keep his team mate behind.

Who was the best driver of the 2015 Brazilian Grand Prix weekend?