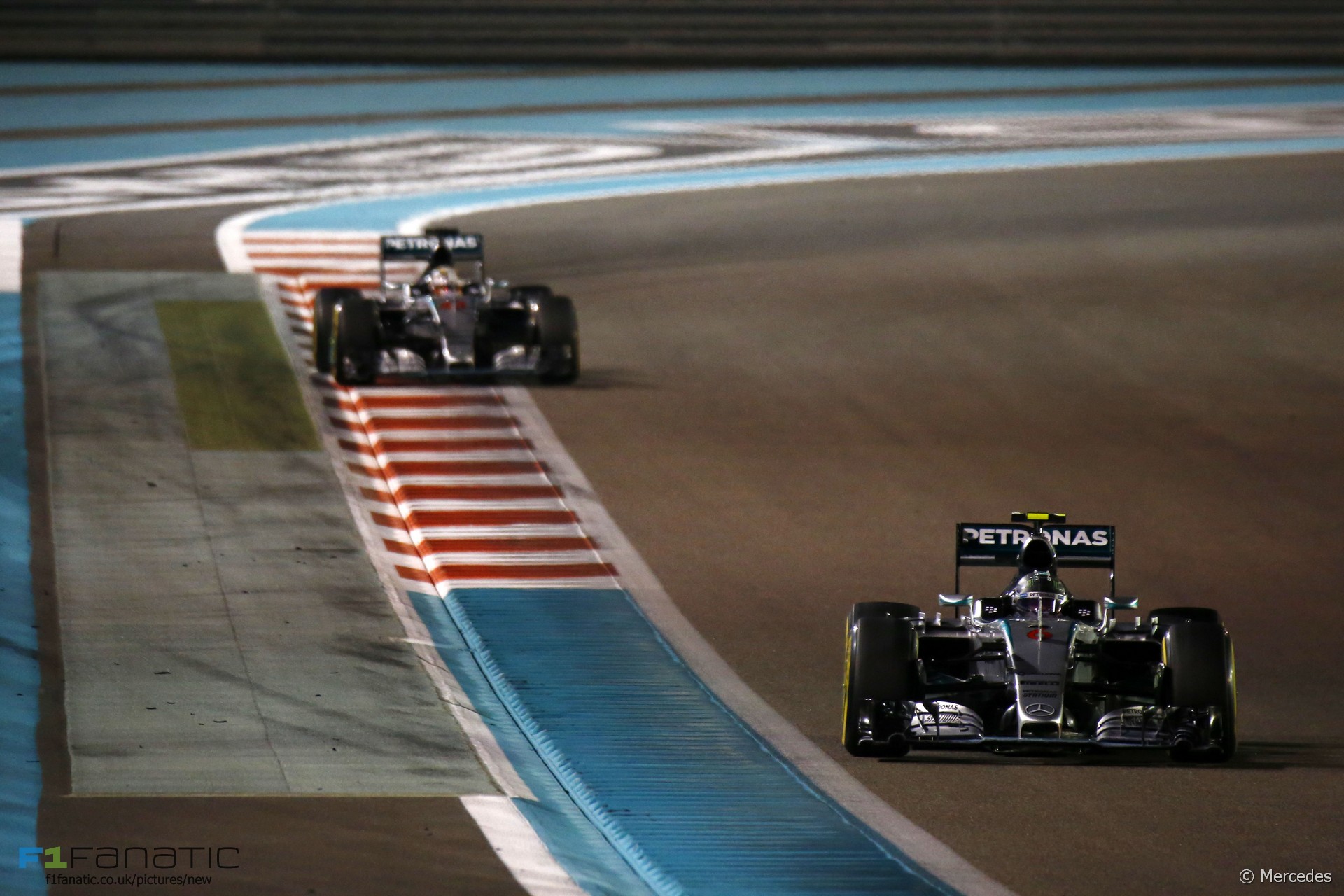 In Brazil, a close threat from Sebastian Vettel’s Ferrari meant Mercedes were reluctant to allow Lewis Hamilton to risk an alternative and potentially inferior strategy to give him a chance of passing Nico Rosberg.

But in Abu Dhabi the threat from the closest Ferrari of Kimi Raikkonen was not as strong, and when a slow pit stop moved him even further away, the Mercedes strategists had more room to get creative with Hamilton’s tactics.

By lap 30 Hamilton had reduced Rosberg’s lead from over six seconds to little more than one. He was poised to get within DRS range of his team mate when Rosberg came in for his second pit stop of the race.

Raikkonen, third, was over ten second behind Hamilton at this point, and on the following lap the Ferrari driver appeared in the pits for his final stop. But the team were slow to switch his front-right tyre, costing him around four seconds. He rejoined the track behind Vettel, who let him through, but both were held up by an intransigent Fernando Alonso .

This all meant Mercedes had more free air behind Hamilton to play with. Within a few laps Raikkonen was taking one-and-a-half seconds out of him, but the limiting factor behind Hamilton was no longer the presence of the Ferrari but how far he could eke his tyres out.

Mercedes’ Toto Wolff said the team “wanted to leave strategy open to do something different with the offset and give him the best chance of the win”. Hamilton was kept out much longer than Rosberg so his final stint would be ten laps shorter.

But tyre performance always varies from car to car and also within teams. It was clear on Friday that of the two Mercedes drivers Hamilton was having the most trouble with the super-soft tyre, a fact borne out by their first stints in the race, when Rosberg pulled almost five seconds on Hamilton in nine laps. Nor was Hamilton convinced the super-soft tyre was the right way to go: “I’m not sure which one was better,” he said afterwards, “but the [soft] tyre was quite good.”

As Hamilton noted afterwards the only obvious way to have given him a more competitive strategy would have been to bring him in for his final pit stop sooner – i.e., move him closer to Rosberg’s strategy. Of course this would have left him with less fresh tyres later in the race with which to attack Rosberg.

It all comes back to the point that in normal circumstances one strategy is superior and teams can figure it out well in advance of the race. Had there been been a quicker strategy available Rosberg would already have been on it, because Mercedes would have no reason to put their leading car on anything less than the best.