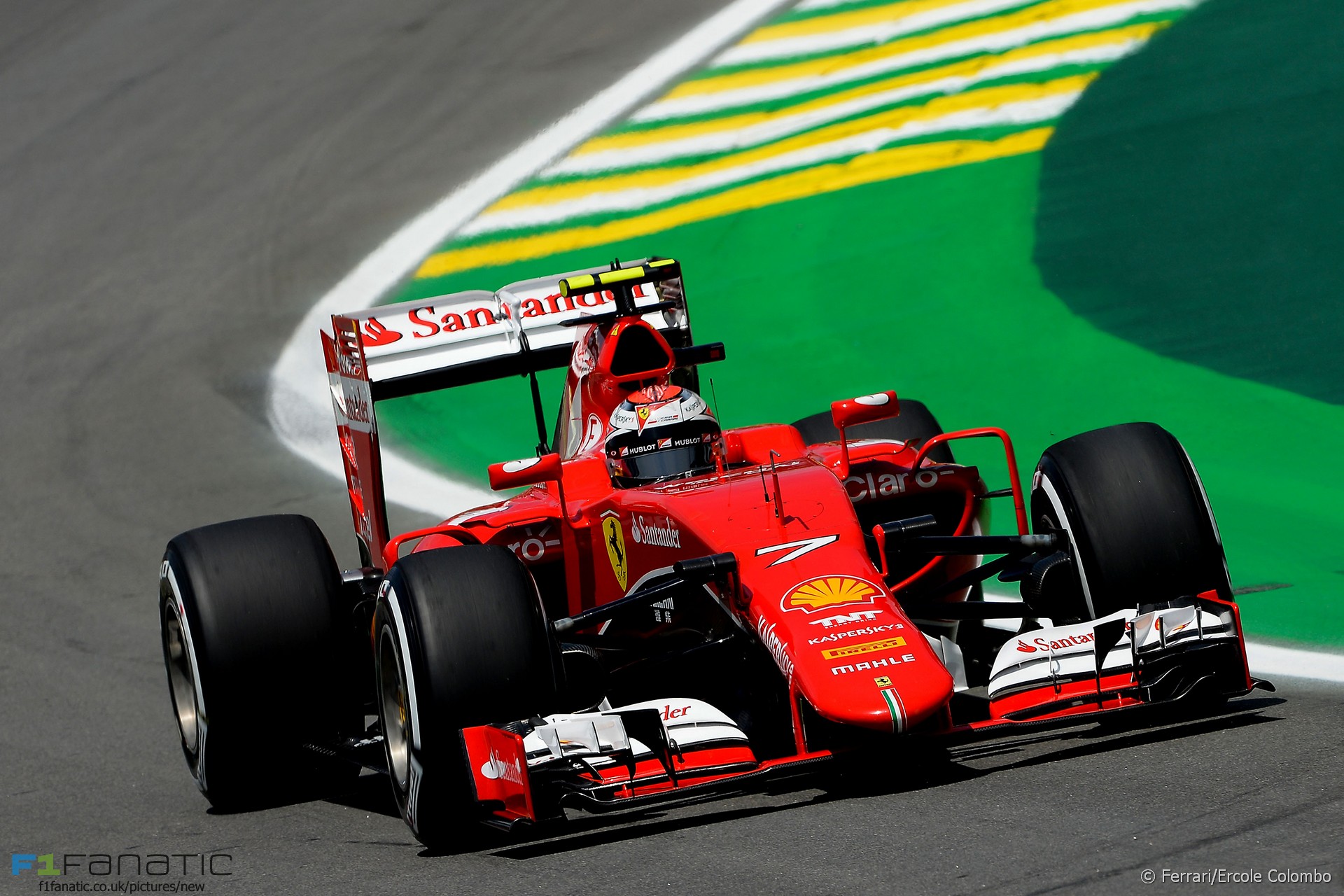 Two years ago Kimi Raikkonen was third in these rankings. But since his return to Ferrari the dependable pace which saw him win races and set new records for consistent points-scoring appears to have deserted him.

In the opening races of the season he looked like a perfect foil to new team mate Sebastian Vettel’s fiery one-lap pace, taking the fight to Mercedes by eking out his tyre life. It worked to great effect in Bahrain, where he came second, and China where he might have taken third off his team mate had the Safety Car not intervened. In Malaysia he recovered to finish fourth despite being eliminated in a rain-hit Q2 and picking up a puncture early in the race.

But all too often Raikkonen was the architect of his own undoing. His lap one crash with Fernando Alonso in Austria was a case in point: the collision itself was a racing incident, but what was the second-quickest car in the field doing fighting for track position with the second-slowest? Raikkonen was only that far down in the first place because he’d dropped out in Q1.

He spun away a podium in Canada and dropped it again in Britain when it rained. Then came those late-season collisions with Valtteri Bottas, in both of which his rival was clearly blameless.

Raikkonen’s sub-par performances were periodically aggravated by car troubles: a braking glitch in Mexico, a poorly attached wheel in Australia and a seemingly endless string of problems in Hungary. But while his team mate twice recovered from such setbacks in qualifying and finished on the tail of the sister Ferrari, Raikkonen seemed to let problems drag him down.

And as the season wore on Vettel increasingly had his team mate handled. While it’s fair to say Raikkonen could have won in Hungary had his team mate’s car failed instead of his, when Vettel romped to victory in Singapore Raikkonen was over three-quarters of a second slower in qualifying.

His margin of defeat to Vettel was little better than it has been when he was partnered with Fernando Alonso 12 months ago. It’s doubtful any other driver has faced tougher competition within his own team over the past two seasons, but this year Raikkonen seldom looked like a former champion – let alone a future one.

Australia – Narrowly out-qualified by Vettel, Raikkonen was squeezed by his team mate in the first corner, then hit from behind by Sainz. That knocked the car into anti-stall mode and dropped him back to eighth. He later passed Sainz but a slow first pit stop dropped him further back, and more problems at the second stop forced him out. A luckless start to 2015, but there was much comfort to be drawn from his and the team’s promising performance.

Malaysia – Missed the cut for Q3 after getting stuck behind Ericsson – “he was there trying to do his job”, Raikkonen conceded – and his weekend got worse when the race started. Nasr tagged the back of his Ferrari, puncturing a tyre, and after it was replaced Raikkonen had fallen to 18th place. The Safety Car played into his hands, however, and a three-stop strategy allowed him to spend more time on medium tyres so he could make up places. His recovery to a comfortable fourth underlined Ferrari’s pace.

China – Failed to beat the Williams in qualifying after complaining of balance problems during his final run. Leapt into fourth at the start with an aggressive move on Bottas into Turn Three and spent the first two stints behind Vettel. Had an opportunity to challenge for the podium with fresher tyres in the last stint, but the late Safety Car robbed him of a chance to challenge.

Bahrain – Despite being out-qualified by his team mate again it was Raikkonen who took the fight to Mercedes in the race by running an alternative strategy, saving his soft tyres for the final stint. He was catching the Mercedes at over a second per lap in the closing stages, and he was poised to strike at Rosberg when the Mercedes’ braking problem handed him second place.

Spain – Mystified by his car’s handling on Friday and repeatedly complained about a lack of grip during the afternoon session. For Saturday the decision was taken for Raikkonen not to use all of the team’s newest parts, and having been compromised further by an unusual problem with a tyre warmer he could only manage seventh on the grid. A combative first lap got him past both the Toro Rossos, but the extra step needed to get him ahead of Bottas wasn’t there – he spent the last ten laps pressuring the Williams driver.

Monaco – Hit the barrier in practice, then had another sub-par qualifying session and lined up sixth behind the two Red Bulls. He jumped Ricciardo at the pit stops but was passed by the Red bull after the restart – a move he took serious exception to.

Canada – With Vettel sidelined, Ferrari needed Raikkonen to deliver in qualifying and this time he did, netting a useful third. However a spin after his pit stop allowed Bottas to jump him for third place, and after aggressively spinning his tyres up he had to pit for a new set. Fortunately no one else was close enough to take advantage. He pitted for a fresh set of tyres but couldn’t catch the Williams – afterwards Maurizio Arrivabene suggested Raikkonen was managing some other problem at this stage.

Austria – Wasn’t able to do a long run on the super-soft tyres on Friday after locking up and damaging them. Dropped out in Q1, blaming the team for not getting him out in time to do three flying laps, though his team mate didn’t need that many to get the job done. Crashed out on the first lap of the race, taking Alonso with him, and couldn’t explain why afterwards. Not his best weekend.

Britain – Looked quick from the word go in practice and deserved to line up in front of Vettel. He was passed by Hulkenberg at the start, but pit strategy got him back ahead. But it all went wrong when the rain arrived and Vettel shot past him. Raikkonen made the call for intermediates but sooner regretted it as the track started to dry, ruining his tyres. He spun, made another stop for fresh rubber and was lapped before finishing eighth.

Hungary – The Hungarian Grand Prix was a depressing litany of misfortune for Raikkonen. First his front wing failed on Friday, then a water leak sidelined him on Saturday. The latter kept him from doing a run on the soft tyres ahead of qualifying, and he ended up fifth on the grid. He followed Vettel through at the start, passing Rosberg for second in turn two, and though he didn’t have his team mate’s pace he was on for a solid second place when his MGU-K packed up. Even then a points finish might have been possible had the Safety Car not wiped out the buffer he’d built over his pursuers.

Belgium – Earned his second reprimand of the season after backing off on the racing line to perform a constant-speed aero test while Grosjean was close behind. In qualifying a power unit problem in Q2 left him 14th, which became 16th after a gearbox change penalty. He rose to seventh at the flag in unobtrusive fashion, fending off a late attack from Verstappen.

Italy – Followed up his best qualifying position in over two years with one of his worst starts. Nonetheless having fallen to the back of the field he climbed back up to fifth at the flag, thanks in part to a very long first stint on soft tyres.

Singapore – Said he was pleased to qualify as high as third – over three-quarters of a second off his team mate – having failed to find the same way with his Ferrari that Vettel had. When Vettel was ran at his true pace in the race, Raikkonen’s deficit was exposed, which explains his “mixed feelings” over taking his second podium finish of 2015.

Japan – Singapore apart, Raikkonen has been closer to Vettel in qualifying in recent races and it continued in Japan, where he was just a tenth of a second off. He had a straightforward race, needing only to jump ahead of the Williams of Bottas, which he did.

Russia – Found it more difficult than others to heat his tyres up on the gripless track, but despite Mercedes impairing Ferrari’s tyre warm-up with a very slow formation lap he got away beautifully and moved up two places to third. He couldn’t stay there however – first Bottas got by and then Vettel, Raikkonen wisely opting to let the latter past after cutting turn two. Ricciardo’s demise moved him up to fourth, but a rash move on Bottas on the last lap fully warranted the penalty he received.

United States – Started further back than Vettel but after two laps there was just one car separating them. This was Verstappen, who Raikkonen complained about on the radio. He stayed out a lap longer than the Toro Rosso before switching to softs, but spun into a barrier one lap after pitting. Although he managed to drag his car back onto the track, a damaged brake duct forced him out.

Mexico – His problems began during final practice, which was disrupted by a power unit problem. Although quick work by his mechanics got him onto the track in time for Q1, a brake problem ended his running in Q2, and subsequent penalties relegated him to 19th. From there he worked his way past the slower cars and was on course for a solid points finish when Bottas appeared in his mirrors with fresh tyres. Raikkonen cannot have been unaware Bottas was alongside him at turn five, so exactly where he thought the Williams would go when he turned in is unclear.

Brazil – Had a high-speed spin during practice but recovered to start alongside his team mate, thanks to the penalty given to Bottas. Had to switch engines before the race, taking an older unit to avoid a penalty, but with the team still optimising the settings on the new unit after the race had started he slipped back. Stuck to a two-stopper, letting Vettel by at one stage.

Abu Dhabi – Had a clean and straightforward weekend. Quicker than Vettel in Q1, he secured third on the grid and had a fairly lonely run to third in the race as well, delayed only by a brief problem at his final pit stop.

What’s your verdict on Kimi Raikkonen’s 2015 season? Which drivers do you feel he performed better or worse than? Have your say in the comments.