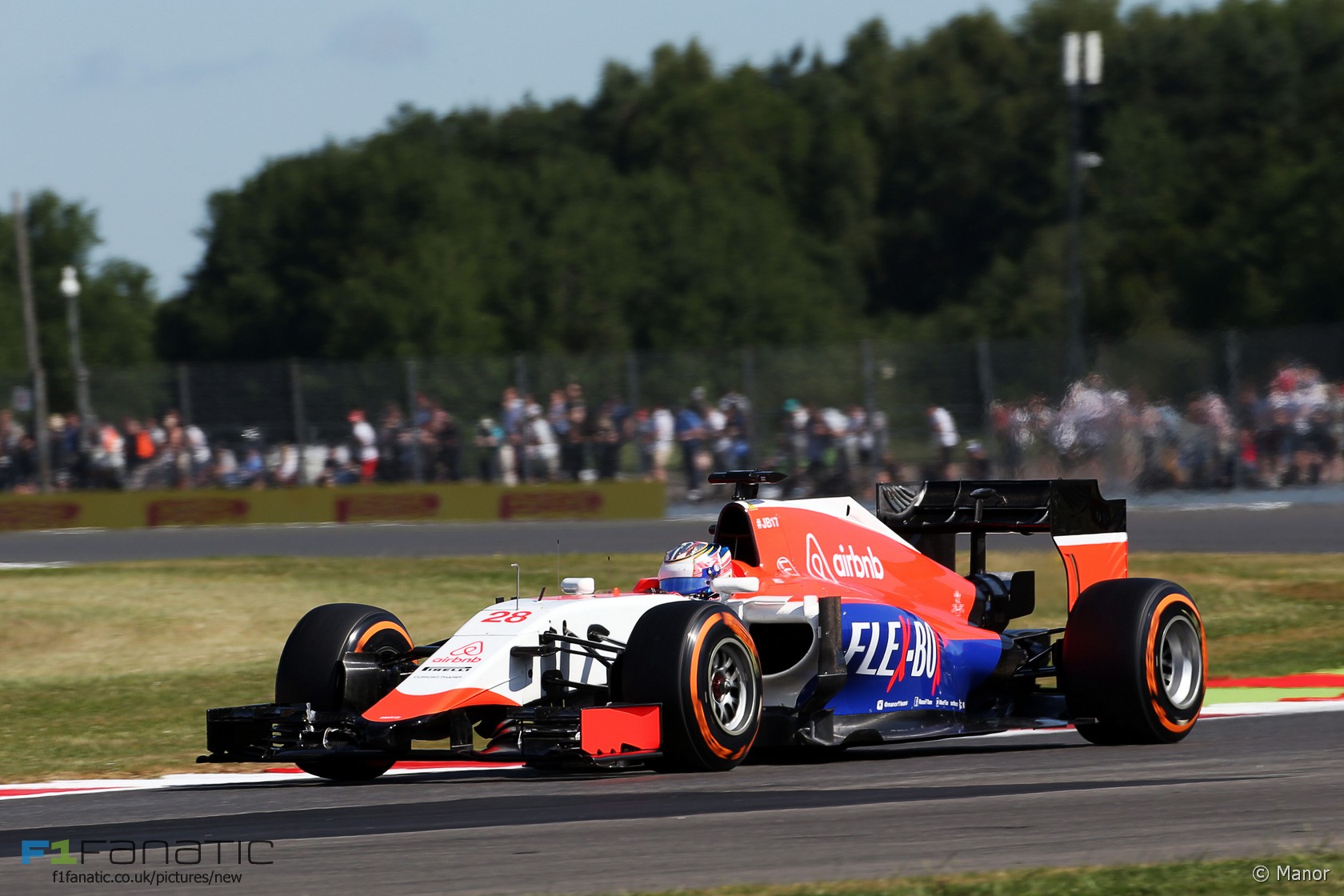 As with the other Manor drivers, there is little scope to benchmark the efforts of Will Stevens this year. He came into the season with a single start to his name, and that was one more than either of his team mates.

The late appearance of the team meant it wasn’t until the third round of the season that Stevens actually got to start a race. Once he’d passed that obstacle he led Roberto Merhi home in China, Bahrain and Spain. The tables were turned in Monaco and Canada, though at the latter a blameless Stevens had been hit by Grosjean while he was being lapped.

The difficult spell continued in Austria where he spun in qualifying and was forced out of the race early on due to damage. At Silverstone he spun and damaged the car when the rain came.

By now the contest between him and Merhi had closed up and in Hungary the pair fought hard until Stevens was forced into the pits to investigate a right-rear tyre vibration. The battle was not resumed at Spa after Stevens tangled with Nasr on the first lap, but he led Merhi home at Monza.

When the team decided to parachute Alexander Rossi in for five of the remaining races, Stevens’ greater experience was expected to see him come out ahead. But this wasn’t the case: Rossi was the first of the pair home in Singapore while Stevens struggled with his tyres. At Suzuka Stevens had a high-speed spin at 130R and Rossi came out ahead again.

Being stung by the newcomer led Stevens to change his approach in the final races. He prioritised race performance in Brazil and although Rossi out-qualified him Stevens passed him in the race and finished ahead. He easily had the beating of Merhi in the finale as well, and that strong end to the season may secure a return in 2016.

View race-by-race notes on Will Stevens

Malaysia – Only participated in practice as a fuel system problem kept him from qualifying or starting the race.

China – Out-qualified Merhi in his first qualifying run of the season. Was finally able to take to the start of a race this season but was passed by his team mate on the opening lap. Stevens overtook Merhi on lap nine and then concentrated on reaching the chequered flag, which he ultimately did, two laps down in 15th.

Bahrain – Was compromised at the start by Pastor Maldonado lining up in the wrong grid position, which meant he fell behind Merhi for the first five laps. After finding a way by he led his team mate home and his better race pace meant he was lapped once fewer.

Spain – Came out on top of the two Manor drivers as usual, despite falling behind Merhi at the start of the race.

Monaco – Damaged his car at the start and had to cope with it until the end. Fell behind Merhi and couldn’t get back ahead.

Canada – Said he was a little less comfortable with his car than usual after being pipped by Merhi in qualifying. Was running behind his team mate at the time of his collision with Grosjean. “I left him so much room,” said Stevens. “It was an unnecessary accident.”

Austria – Spun in qualifying and was over a second slower than his team mate, though he said traffic was to blame. His race was over quickly after debris damaged his radiator on the first lap.

Britain – Was more comfortable with the car balance on Friday as the pair evaluated the team’s upgrade package. He out-qualified Merhi by a whopping two seconds but lost time in the pits when his team weren’t ready for him. An early switch to intermediates also made life difficult – he spun off on worn tyres late in the race, losing his front wing.

Hungary – Admitted to a mistake on his first qualifying run, then struggled to improve on it on his second. Scrapped with Merhi over the final two places before retiring with a vibration.

Belgium – Prevailed in the battle of the Manors in qualifying by little more than a tenth of a second. However contact at the start dropped him behind Merhi, where he finished.

Italy – Started from the rare heights of 13th due to other drivers’ penalties, but the Manors slipped back to their usual positions by the end of the race. Stevens had the measure of his team mate at Monza, beating him to the flag by 13 seconds.

Singapore – Described Singapore as “the most difficult of the season so far” after clipping the wall during his first day of running at the track. Despite experiencing a lot of tyre degradation in the race he brought the car home, albeit behind his new team mate.

Japan – A five-second penalty for pit lane speeding would probably have dropped Stevens behind his team mate at the chequered flag even if he hadn’t spun at 130R late in the race, losing the position.

Russia – Dropped behind Merhi at the start and flat-spotted his tyres at the restart. That meant he had to pit a second time and ensured he finished last.

United States – Didn’t figure after being hit at the first corner, retiring with damage.

Mexico – The battle between the Manor pair was one of the more interesting features of the race. Stevens was ahead most of the way but he was unhappy with his switch to a one-stop strategy having been happier on the medium tyre.

Brazil – Said he was focussing on his race set-up instead of qualifying after ending up behind his team mate. This seemed to pay off as he led his team mate home after taking care of his rear tyres.

Abu Dhabi – A solid final weekend in which he out-qualified and finished ahead of Merhi.

Faster than Merhi in qualifying, but as the season went on seemed to lose out during the races. Unremarkable season, so like Merhi just didn’t impress.
@Npf1

What’s your verdict on Will Stevens’ 2015 season? Which drivers do you feel he performed better or worse than? Have your say in the comments.