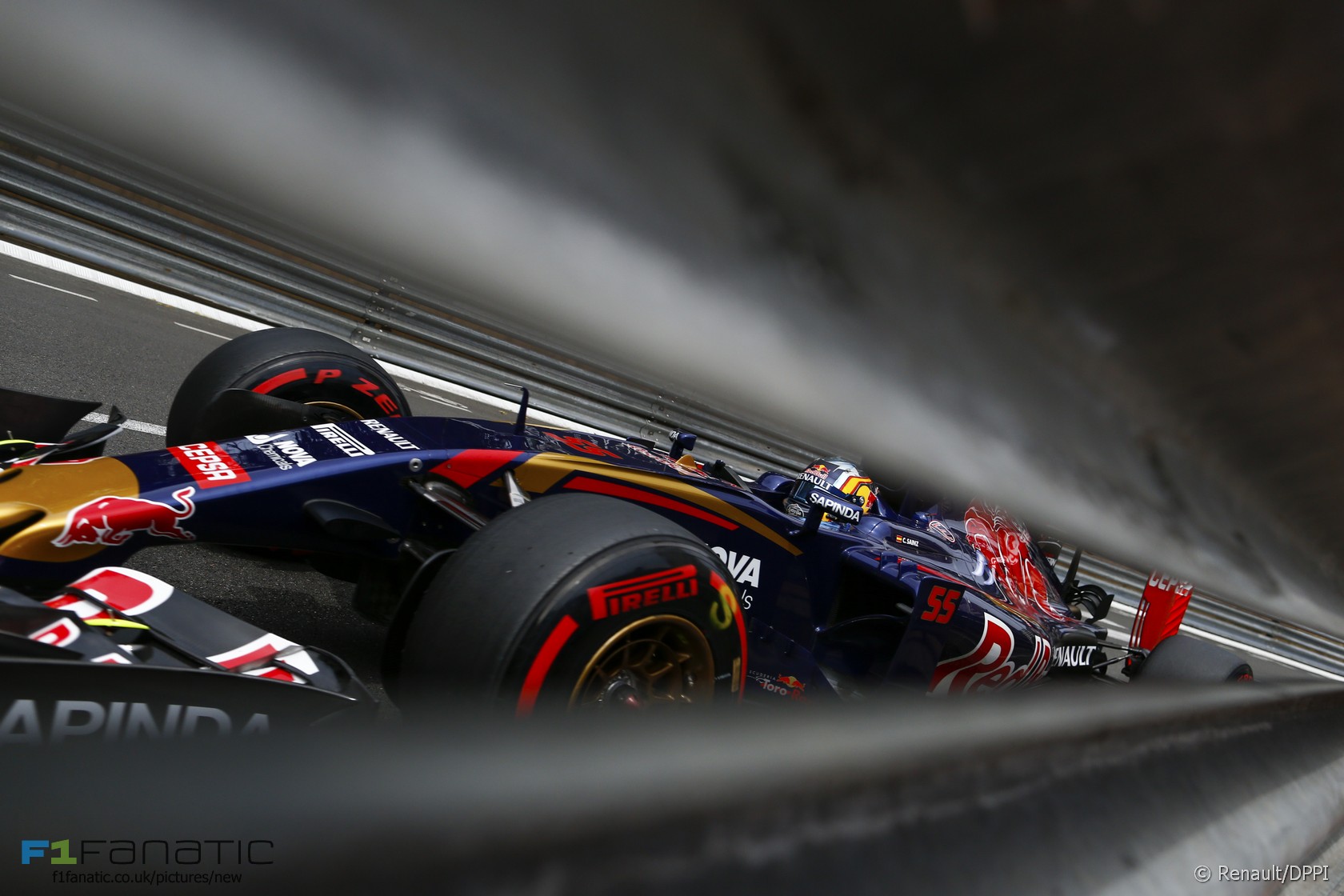 The raw stats show that Carlos Sainz Jnr had a very small edge over his much hyped team mate Max Verstappen in their first season of F1. Out of the ten races both drivers finished, each was ahead five times. But Sainz took a narrow victory in qualifying.

Sainz also bore the brunt of Toro Rosso’s persistent technical failures which hit him hardest at mid-season. In Bahrain, Austria, Britain, Hungary, Belgium, Russia and Brazil his car gave up before the end. On other occasions he made it to the end despite being seriously delayed by a glitch of some kind, such as his gearbox problem in China, although on that occasion he had already lost time with a mistake.

Despite allowing for all of this, Sainz didn’t shine quite as brightly as his team mate did, though he did produce some excellent performances. He qualified on the fourth row for his debut and took points despite a slow pit stop (though only two cars were running behind him). A combative late stint in Spain saw him pass Verstappen and Daniil Kvyat for ninth place.

Monaco was arguably his best result of the season. Stating from the pits after missing the weigh bridge during qualifying, he climbed into the points at the end after running 66 laps on the same set of tyres.

Sainz wasn’t able to hit the same heights as his team mate however, notably in the USA where a spin during the wet qualifying session put him on the back foot during the race. He took seventh place, three spots behind Verstappen, after collecting a five-second penalty. It was an eventful end to the season for Sainz who hit the wall twice in Singapore, collected a bollard while heading for the pits in Japan and suffered an enormous crash during qualifying in Russia yet impressively was well enough to start the race.

The final points difference between the pair exaggerated Verstappen’s superiority, but Sainz is definitely capable of keeping his talented team mate on his toes. A convincing display in the season finale in Abu Dhabi, where Sainz prevailed after Verstappen slipped up, underlined that point.

Australia – Qualified an excellent seventh but after making a good start he clipped Raikkonen, damaging his front wing. A disastrous pit stop then cost him half a minute and dropped him out of contention for the upper points places, and with four laps to go Ericsson demoted him to ninth. Nonetheless, he scored points on his debut.

Malaysia – Admitted he was at fault for not reaching Q3 but went on the attack at the start, making up four places. Ran fourth after the Safety Car period but was never going to keep the likes of the Mercedes drivers behind him. But he made his two-stop strategy work – he was the only two-stopper to score points besides Vettel.

China – A tough weekend for the Spanish rookie. Beaten by Verstappen in qualifying before a spin at the beginning on lap two left him last. Recovered to 14th by his first pit stop but a gearbox problem on lap 20 left him stranded on track, costing around 20 seconds. From that point on, points were never a possibility and he ultimately crossed the line an unfortunate 13th.

Bahrain – Bahrain was never likely to be a strong venue for the Renault-powered team so it was to Sainz’s credit that he got the car into Q3. Like his team mate, however, he was destined not to finish.

Spain – Having been unsure about his car in practice he found its handling transformed in qualifying and duly took a best-yet fifth on the grid. Spent most of the first stint being overtaken, but kept his cool and at the end of the race his tyres were still in good enough shape for him to pass Verstappen and Kvyat for ninth place.

Monaco – Would have started eighth he had not missed the weigh bridge in qualifying. His team then didn’t take the car for weighing, and the standard penalty of a pit lane start was applied. From there a huge 66-lap stint on soft tyres helped him grab a single point.

Canada – The Circuit Gilles Villeneuve was new to both Toro Rosso drivers and Sainz prevailed in qualifying to the tune of two tenths of a second. He got ahead of Ricciardo for 12th, but the day was always going to offer little for the Renault-powered cars. “With all the fuel saving and lift-off we had to do, it was very difficult out there,” Sainz reflected.

Austria – Was a few tenths off Verstappen’s pace when the track was greasy on Friday, and a similar margin off in qualifying, where he set his car up with rain in mind. It didn’t arrive, but a quick start moved him up to ninth. Made a smart call on his own to stay out of the pits when he was told to, as Nasr in front had gone in, but when Sainz came in his pit stop was slow. A pit lane speeding penalty and an electrical problem finished off his chances.

Britain – “We knew Carlos would be strong as he had already tested here with us before,” said chief race engineer Phil Charles. Sure enough he was the only Toro Rosso driver in Q3, lining up eighth. But he made a poor start and slipped out of the points before an electrical problem ended his weekend’s work.

Hungary – Put Toro Rosso in the top five in final practice but stumbled in qualifying, unhappy with his car’s braking as the track conditions changed, and ended up 12th. Running sixth after the Safety Car period, yet another Toro Rosso failure forced him into retirement.

Belgium – Very pleased with his qualifying effort after sneaking the Toro Rosso into Q3. But for the fourth race in a row his car let him down, and after spending half the race toiling around at the back the team elected to retire him to save engine mileage.

Italy – Finally saw the chequered flag again after a string of failures in recent races, however a five-second time penalty for gaining an advantage when he went off at the start cost him a shot at a point.

Singapore – Hit the wall during practice on Friday and again in qualifying, wrecking his chance of joining Verstappen in Q3. In the race he suffered a repeat of the gearbox problem which had delayed him in China, but he was able to follow his team mate to complete a double points score for Toro Rosso – their first since Malaysia.

Japan – Driving at Suzuka for the first time, and unable to run in the dry on Friday, it was perhaps to be expected that he didn’t make it into Q3. He was trying to get in between the Lotuses when he hit a pit entry bollard, damaging his front wing, and ultimately slipped to tenth behind Verstappen.

Russia – His huge crash at turn 13 on Saturday appears to have been caused by driver error – perhaps a combination of it being his first flying run on a new set of tyres and the instability caused by the DRS closing in the braking zone. Happily he was uninjured and remained conscious which meant he was able to race. Despite admitting he felt dizzy early in the race Sainz picked off the slower cars and made it to the top ten, and the Safety Car allowed him to make a well-timed switch to soft tyres. His brakes failed to go the distance, however, and he retired after a second touch with the turn 13 barrier – fortunately a much lighter one.

United States – Crashed in qualifying but having started last he was tenth by lap two. Despite being delayed by a slow pit stop due to a wheel nut problem, and picking up a pit lane speeding penalty, he claimed points for seventh place. Moving across on Ricciardo in the braking zone for turn 12 was questionable, however.

Mexico – Was running well in the race until he picked up a tyre vibration after the Safety Car period and fell out of the points.

Brazil – He was distracted by an electrical problem during qualifying which meant his steering wheel display wasn’t working, and consequently failed to make it into Q3. His car failed seconds after leaving the garage before the race start, and after he was fired up in the pits he made it just four corners before the wheels locked solid, ending his race.

Abu Dhabi – After yet another breakdown in second practice Sainz got into Q3 and started the race well, passing the Williams drivers around the outside. That put the Toro Rosso rather higher than it was capable of running and he slipped back behind Massa before coming under pressure from his team mate. Both had to let each other past at different points but it was Sainz who came out ahead, though he lost the final points place to Grosjean.

Overshadowed by his team mate, but definitely a very good rookie season for him as well. It’s a shame that in the two races where Verstappen scored his fourth places, Sainz was actually on par with him, but in Hungary he had a mechanical problem and in Texas he started from the back.
@Andae23

What’s your verdict on Carlos Sainz Jnr’s 2015 season? Which drivers do you feel he performed better or worse than? Have your say in the comments.