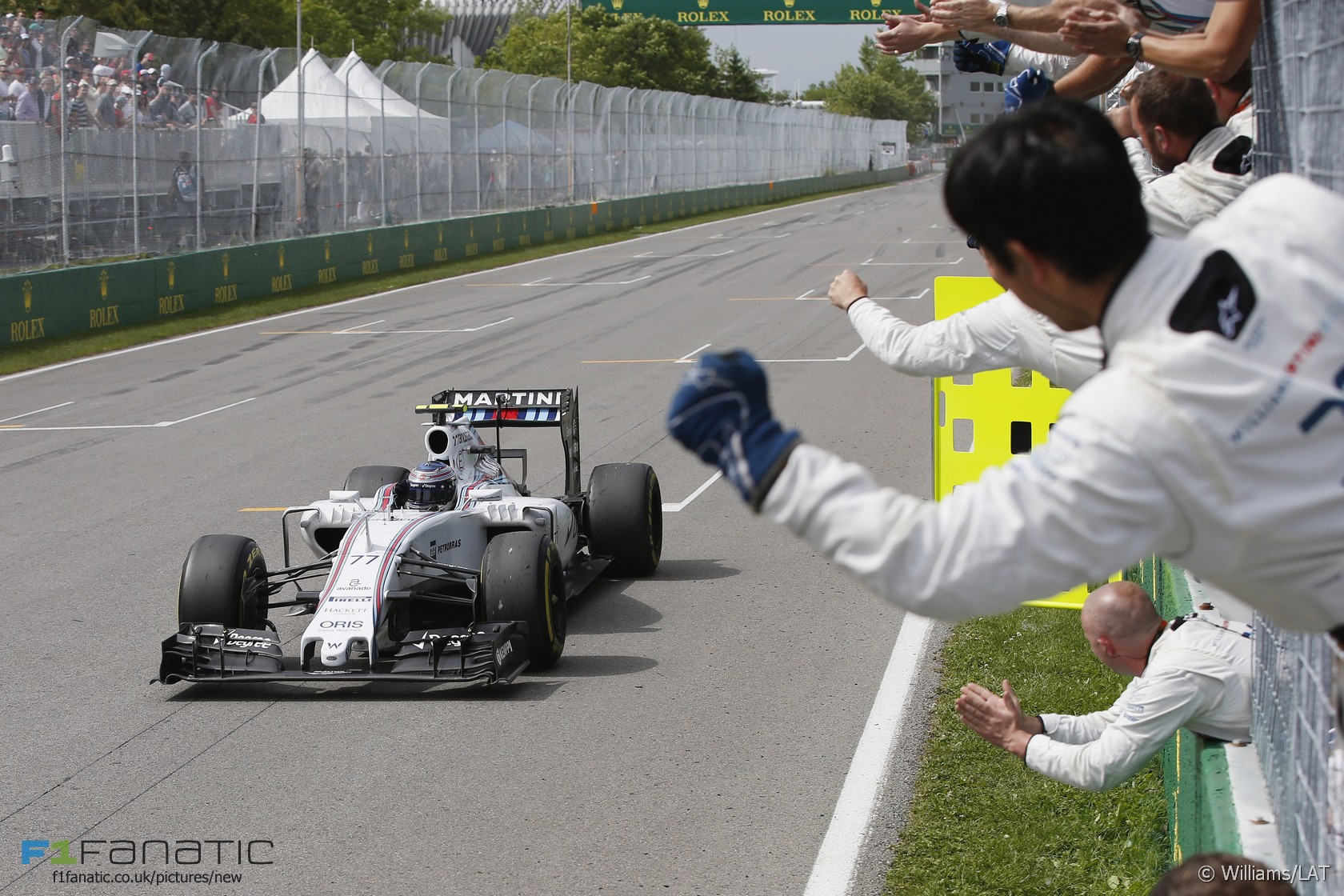 Valtteri Bottas had a less effective Williams at his disposal in 2015 compared to the one he scored half-a-dozen podium finishes with last year. At times it seemed his level of commitment also waned, but on reflection this seems a harsh assessment.

His season was compromised from the start the back injury he picked up in Melbourne, which niggled throughout the opening flyaway races. Nonetheless he consistently placed inside the top six in the eight races following his return with one exception. That was Monaco, where on a difficult weekend for Williams he qualified a poor 17th – not exactly making the best of a bad job.

Nonetheless when the opportunity for Williams to beat one of the Ferraris presented itself, Bottas was the driver most likely to capitalise. He led home Sebastian Vettel in Bahrain and Kimi Raikkonen in Spain and Canada.

At Silverstone, however, it was Felipe Massa who seized the initiative on one of the team’s strongest days. Bottas potentially compromised his position by waiting to get permission from the team before trying to pass his team mate, though it’s doubtful he would have made the move stick and would have taken enough of an advantage from it to make up for his eventual loss of pace when the rain fell.

However his dip in the second half of the season was mostly down to some rotten luck, without which he would comfortably have beaten Raikkonen to fourth in the drivers’ standings. He was set for a good result in Hungary when he was hit by Max Verstappen, started third in Belgium but dropped back when the team put the wrong tyres to his car, was rammed out of third place by Kimi Raikkonen in Russia and thwarted by suspension trouble in the USA.

Bottas tends to play things conservatively. As a result he rarely makes rash errors but at other times this approach costs him – especially his starts which were a notable weakness at some races. He only bares his teeth when there’s a strong result in the offing – recall his muscular pass on Raikkonen in Mexico on his way to a podium finish.

It was harder to identify Bottas as a star of the future this year than it was 12 months ago, but the potential is still there.

Australia – If anyone was going to get within a second of the Mercedes drivers in qualifying Bottas was probably the most likely to do so. Unfortunately he began suffering back pain in qualifying which later turned out to be “a very small tear in the annular part of a disc in his lower back”. That ruled him out of the race.

Malaysia – Bottas had a disastrous first lap, plummeting to 14th place. He was also one of several drivers who had to queue behind his team mate during the dash to the pits on lap four, but once back on track he quickly made up places and by lap 11 he was on Massa’s tail. Had an entertaining scrap with Verstappen, who he passed on the outside of turn five, and he later used the same move to claim fifth from Massa.

China – Lined up behind his team mate on the grid and was able to jump him at the start, but lost out after Raikkonen’s daredevil move into turn three. Struggled to match his team mate’s pace during the race but was easily quicker than the Lotus behind and so spent the race virtually alone.

Bahrain – Completely free of back pain for the first time since being injured in Australia, Bottas took fifth on the grid ahead of his team mate and was well-placed to take advantage of Vettel’s delays. He held the Ferrari driver at bay until the chequered flag to equal Williams’ best result of the season so far with fourth.

Spain – Sat out first practice while Susie Wolff drove his car but was able to take advantage of Raikkonen’s troubles to qualify fourth. He then held off the Ferrari in the latter stages of the race to keep the place.

Monaco – Williams had it bad in Monaco but 17th in qualifying for Bottas before penalties was quite a shock. Started on the soft tyres but couldn’t make an alternate strategy yield a points finish.

Canada – Delivered under pressure at the end of Q3 to move ahead of both Lotus drivers for fourth place – and he was less than a tenth off Raikkonen. “That was as quick as the thing goes,” he said on his way back to the pits. Although he couldn’t keep pace with Raikkonen in the race he was quick enough to take advantage of his rival’s spin at the chicane. So for the third time this year he came home ahead of a Ferrari – and this time it earned him a podium finish.

Austria – Was pleased with the performance of his updated car and especially its performance on long runs on Friday. But had to settle for sixth on the grid as he was unable to use DRS at the end of his final lap because of the yellow flags brought out by Hamilton’s spin. Passed by Verstappen at the start, he got by the Toro Rosso driver in the race and then passed Hulkenberg too, only for the Force India driver to jump back ahead via the pits. Finally passed Hulkenberg again for an eventual fifth, as braking trouble hampered further progress.

Britain – Susie Wolff drove his car in first practice, then in qualifying he was narrowly beaten by Massa. Having given Hamilton a bit of an easy time at The Loop on lap one, Bottas pounced at the restart to take up second behind Massa. In Hamilton’s view, Bottas was quicker than Massa, and had Williams not initially told him not to pass his team mate Bottas might have got ahead at this point. Hamilton jumped him in the pits and Rosberg overtook him when the rain began to fall. Having been slightly slower than Massa on the hard tyres, Bottas lost far more time on intermediates at the end of the race, and was nearly passed by Kvyat.

Hungary – Ran Williams’ new front wing and secured sixth on the grid, and was running fourth early on. Having been jumped by Hamilton and Ricciardo at the first round of pit stops, he was poised to profit from their post-restart scrap when he was tagged by Verstappen, picking up a puncture.

Belgium – Never higher than ninth in practice, Bottas brought it all together when it counted to take third on the grid. However Perez and Ricciardo beat him away at the start, then Rosberg and Vettel came past at the start of lap two. His race was effectively ruined when the team fitted a medium compound tyre to his car by mistake along with three softs, which earned him a drive-through penalty. He still came away with points for ninth.

Italy – Said he wasn’t able to get a good tow in qualifying and started behind Massa. His pace at the end of the race on worn medium tyres was far better and he was beginning to put Massa under pressure as the race finished.

Singapore – Declared himself satisfied with seventh on the grid and after a clean start he had a fairly uneventful run to fifth, besides having to nurse a gearbox problem in the closing stages.

Japan – Third on the grid at Suzuka for the second year in a row, he was passed by Vettel at the start but got in front of Rosberg. An early first pit stop kept him ahead of the Mercedes until Rosberg surprised him at the chicane. Another position was lost to Raikkonen in the pits, leaving Williams to regret not having brought him in sooner.

Russia – Bottas seems to have an affinity for the Sochi track: he qualified strongly again, and although Raikkonen got ahead on lap one the Safety Car restart afforded Bottas a chance to regain the place which he grabbed. Having to pit earlier than the Ferraris for fresh tyres undid him – it dropped him into traffic, allowing Vettel to jump ahead, and at the end of the race his more-worn tyres allowed Raikkonen to close and make that fateful overtaking attempt.

United States – Was quick in the very wet final practice session, but Sunday was a wasted effort. Technical trouble in qualifying kept him out of the top ten, and another fault put him out of the race.

Mexico – A suspension breakage ruined his race in the USA, but in Mexico his contact with Raikkonen gave Bottas cause to thank the solid construction of his Williams. Having run behind both the Red Bulls at the start he beat them to the final podium position. He did so by making an early first pit stop, muscling his way past Raikkonen, jumping Ricciardo in the pits and out-dragging Kvyat at the restart.

Brazil – Despite picking up a three-place grid penalty for passing Felipe Nasr when the red flags came out in second practice – which Bottas felt was unavoidable – he still started in front of his team mate. A rapid start put him on the tail of the Ferraris but he lacked the pace to get ahead of them.

Abu Dhabi – Made one of his less impressive starts, then his race chances were ruined when he was released from the pits just as Button was arriving, leading to a collision and penalty. He found himself on Button’s tail at the end of the race and surprisingly couldn’t make it past.

He was the best non-Mercedes/Ferrari driver most weekends and he was in with a shout of beating one of them in the championship despite starting one less race. Took his opportunities and made few mistakes. Consolidated his position as one of the top talents of the future.
@Geemac

What’s your verdict on Valtteri Bottas’s 2015 season? Which drivers do you feel he performed better or worse than? Have your say in the comments.