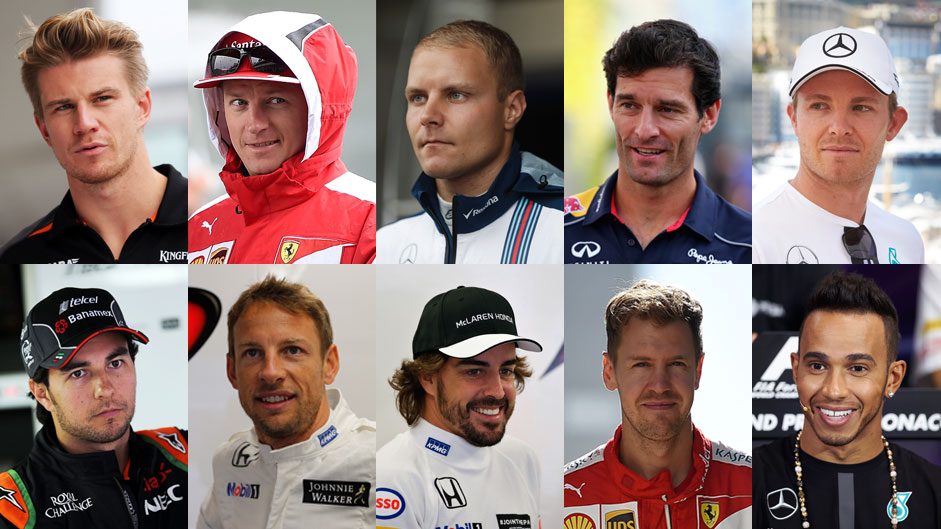 Since 2011 F1 Fanatic readers have been selecting the best drivers during each race weekend.

After almost 100 polls, it’s time to reveal which drivers have been your top picks over the last five years – and who missed out on a place among the leading ten.

Nico Hulkenberg has the unenviable status of being widely considered one of F1’s most impressive drivers not to have been given a chance with a top team.

He arrived in the sport having won the GP2 title as a rookie, a crown he added to his F3 Euroseries and German Formula BMW titles. But late in 2010 within the space of a few weeks he went from scoring Williams’ first pole position for five years to being dropped by the team to make way for Pastor Maldonado and his PDVSA millions.

After a year on the sidelines his 2012 return with Force India yielded another impressive showing in Brazil which saw his first of four Driver of the Weekend wins – despite the fact he only finished fifth after colliding with Lewis Hamilton.

Kimi Raikkonen’s comeback to Formula One since 2012 as been a tale of two halves – plucky underdog heroics with Lotus and a thus-far disappointing reunion with Ferrari. Unsurprisingly, it’s the former which saw him voted Driver of the Weekend three of the four times so far.

A strong showing by Raikkonen early last year in Bahrain suggested he had been rejuvenated by Ferrari’s gains with the SF-15T, but over the balance of the season he was decisively outclassed by Sebastian Vettel. He has an important season ahead of him.

Over the last three years of his F1 career, Mark Webber was increasingly dissatisfied with the sport’s move towards gimmicks such as DRS and high-degradation tyres. Meanwhile team mate Vettel was piling up the silverware.

However Webber impressed with several wins of his own and at Shanghai in 2011 raced from 18th to finish on the podium. His final Driver of the Weekend came after Vettel disobeyed an instruction to finish behind him at Sepang in 2013.

One of the breakthrough talents of recent seasons, Valtteri Bottas hit a superb streak of form in the middle of 2014 when he was voted Driver of the Weekend in three consecutive races.

F1 Fanatic readers had already acknowledged his talents after he hustled his uncompetitive Williams to eighth – its best result of the season – on his first visit to the Circuit of the Americas.

Nico Rosberg had previously struggled to match Hamilton during their spell together at Mercedes. In 2014, despite Rosberg taking the championship fight until the final round, he was only voted Driver of the Weekend once, at the penultimate race.

But has he now unlocked a new level of performance which could allow him to take the fight to his team mate in 2016? It certainly looked that way late in 2015 when he reeled off six consecutive pole positions and three consecutive victories.

The Pirelli era could have been made for ‘tyre whisperer’ Sergio Perez. Nursing his rubber further and faster than anyone else has always been one of his greatest strengths ever since he won the Driver of the Weekend poll on his debut.

Perez has become a more well-rounded driver since then and in particularly has cut out some of his more impetuous moves. He came of age in the second half of 2015, leading the charge for Force India and putting his highly-rated team mate in the shade.

Jenson Button habitually conjured up brilliant wins in mixed conditions when McLaren were a race-winning force. The team haven’t been that competitive for three years, however, and Button’s efforts have been much less conspicuous as a result.

While both he and Alonso had been regular Driver of the Weekend winners before 2015, the uncompetitive MP4-30 meant both lacked the hardware to demonstrate their talent last year. For the sake of both champions, hopefully that is about to change.

Alonso led the championship for months in 2012 and came within three points of taking a third title. It wasn’t to be, but he frequently topped the Driver of the Weekend poll during his stint at Ferrari – even when he wasn’t on the top step of the podium.

Like Button, it was slim pickings for him in the 2015 McLaren. At times Alonso’s frustrations with the car seemed to get the better of him, and more than once he threatened to park it.

Vettel netted three of his four world championships during the last five seasons but at times some felt the performance of his Red Bull gave him too great an advantage. It’s perhaps to be expected that despite having taken 32 wins in the past five years he has less than half as many Driver of the Weekend poll victories.

The past two seasons have been more difficult for him and this seems to have prompted some re-evaluation of his efforts. He even took one Driver of the Weekend poll win during his win-less 2014 campaign.

Half of Hamilton’s 20 Driver of the Weekend poll wins came before had the crushing Mercedes W05 and W06 at his disposal. His 2012 season was especially impressive but the unreliability of the McLaren MP4-27 ultimately thwarted his title ambitions and prompted a move to Mercedes which has proved highly successful.

Hamilton has often said he prefers to win races after scrapping with his rivals rather than dominating from the front, and this seems to resonate with F1 Fanatic readers. His triumphs at the Nurburgring in 2011, Monza in 2014 and the Circuit of the Americas in 2012 and 2014 demonstrate that wins earned through passes on the track are always well received.

NB. Where two drivers had the same number of wins the number of races they had started over the past five seasons was taken into account. If this failed to produce a winner the highest voting percentages were used.

Among the drivers who failed to reach the top ten are Daniel Ricciardo and Max Verstappen, each of which have won Driver of the Weekend three times. Impressively, Verstappen took three wins in his first championship season last year.

Romain Grosjean is the only other driver to have won more than once and not place in the top ten.

And there’s an unwanted record for Felipe Massa – he’s the only driver to have competed in all five of the last seasons without being chosen as Driver of the Weekend once.

The other Driver of the Weekend winners:

Which F1 drivers have impressed you the most over the past 12 months? Have any received too little recognition from F1 Fanatic readers?