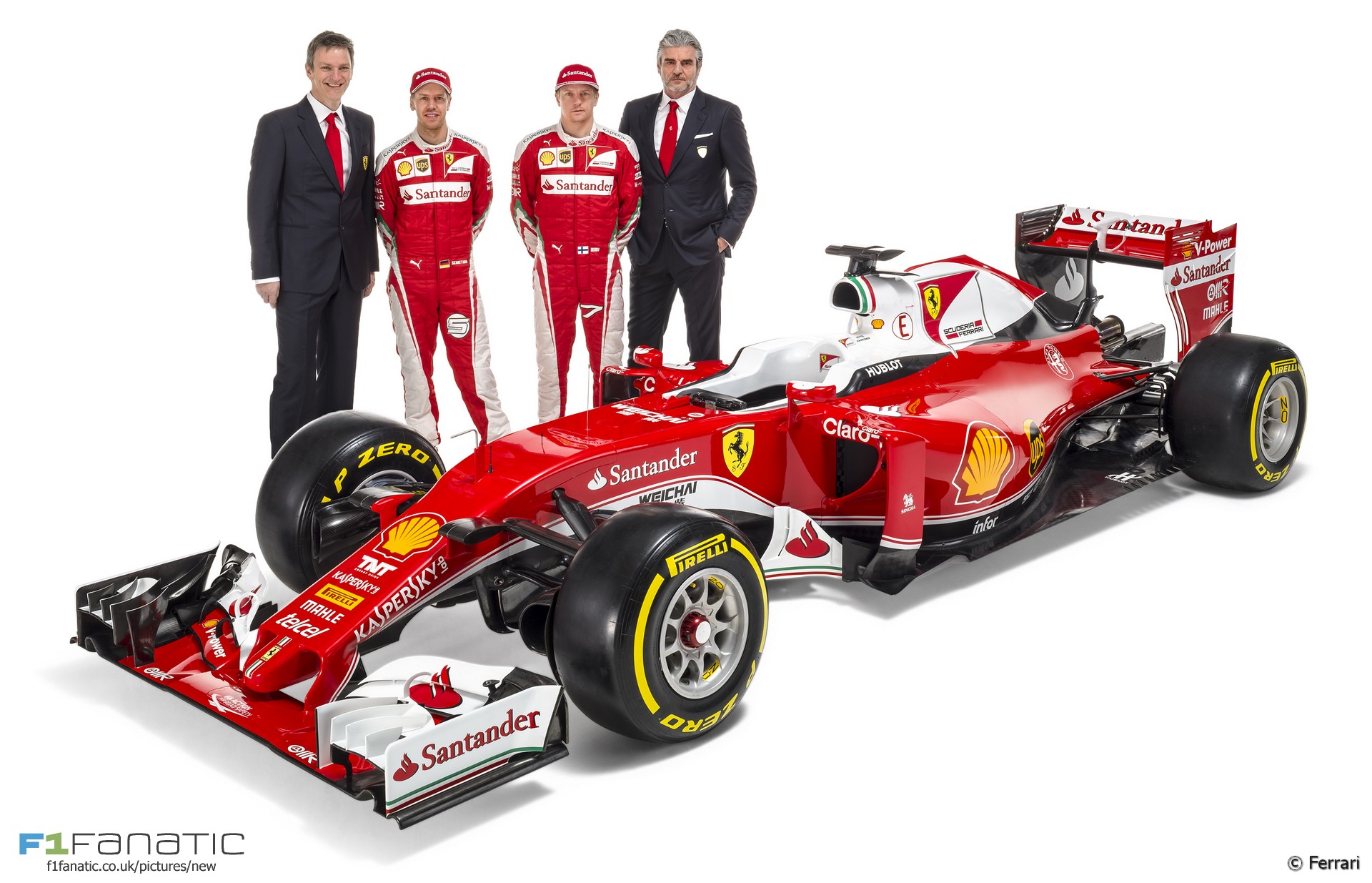 Ferrari president Sergio Marchionne has stated that should the team go ten years without winning a title it would be ‘a tragedy’. The last addition to their trophy cabinet was eight years ago, so the clock is ticking.

After establishing themselves as the second-best team after Mercedes in 2015 and winning three races, expectation are high for the season ahead. The new SF16-H, revealed today, is the car that they hope will catapult them ahead of the dominant Mercedes, and it is clear even from the car’s launch specification that Maranello’s latest incarnation is a statement of intent.

As rumoured during the off-season, Ferrari has ditched the long nose philosophy they stuck to throughout last year and switch to a short, thumb-tip style snout. With the crash structure now scaled back to hang just over the trailing edge of the front wing main plane, there is now more room for the aerodynamicists to play with.

Instead of smoothly blending into the main body of the nose, the thumb-tip extrudes backwards before sharply cutting off. This is quite a desirable design feature as it allows better control of the airflow beneath the nose.

The wing’s mounting pylons have a wide stance to create more space for airflow to pass through, onto the splitter region and then around the undercut of the sidepods (more on these later). Their twisted shape is similar to that on last year’s Red Bull, which are designed to manipulate flow neatly along the flanks of the splitter.

The change in philosophy at the front of the car will have an a knock-on effect on the aerodynamic flow structures over the rest of the car. The higher mass flow is advantageous as the surfaces of the car can be worked harder by the air, which will have prompted some rethinking of the current aero devices hanging beneath the chassis such as the turning vanes and ‘bat wing’ that surrounds the ground speed sensor.

As for the front wing, this is merely the end-2015 specification for launch purposes and probably for the first test. Expect to see a lot of development in this area before the car heads to Melbourne for the first race.

The nose camera pods remain on slender stalks to best manage airflow along the sides of the chassis. New restrictions on these will come into force next year.

For the first time in four years Ferrari is using pushrod-actuated front suspension. Chief designer Simone Resta has described the change as “a step forward” from a mechanical perspective although I believe the differences between each set-up are not too drastic. There will be a small aerodynamic impact, though, as the pushrod is more obstructive to oncoming flow.

A key advantage of a pushrod layout is the ability to make faster setup changes during a session. With a pullrod setup a torsion bar, damper or heave element change means accessing the suspension components from underneath the car, which can be fiddly and time-consuming.

After the nose and front suspension suspension SF16-H is how incredibly narrow the rear bodywork is – see this comparison between the two. This has been achieved by working on the power unit’s architecture: compacting the ICE (internal combustion engine), hybrid systems and gearbox together as tightly as possible provides greater freedom to sculpt the car’s sidepods.

Ferrari have retained their angled radiator layout for 2016 and still managed to shrink the side of the sidepod inlets slightly. This cuts drag and improves the quality of the airflow passing around the sidepod undercut that travels back towards the rear diffuser

Although the first portion of the bodywork appears outwardly bulky, it is worth noting that it houses the ICE’s own radiator, the ERS cooler and the intercooler amongst other components. The outline of the car then tapers elegantly into the rear section. This tapering is actually more dramatic than it appears in the overhead image, as the base of the bodywork actually undercuts the upper portion. The upper half then flares back outward slightly to eject the hot internal air, with the rear suspension arms piercing it in places to reach the gearbox case.

The rear view mirrors and related aerodynamic ancillaries have been transferred across from the SF15-T, although it is worth noting that the vertical turning vanes that flank the car’s sidepods are of older specification to those that ended the season on the car last year.

The SF16-H features lovely sculpting in this area. The squared-off triangular airbox inlet which feeds the turbo’s compressor begins to cut downward before rising back up to form the spine of the car with the engine cover. To me this looks like an inspired design from Williams who used a similar approach with their heavily sculpted gearbox in recent years.

The clearance left allows the installation a pair of horizontal canards, which are drooped slightly towards their trailing edge. These are an evolution of what the Scuderia had last year and are an increasingly popular aerodynamic device as they condition the airflow heading towards the rear wing. Additional cooling louvres have been made along the cockpit side to reject hot air from the compact internals.

As with all the new cars Ferrari have had to incorporate a 20mm increase in the height of the driver’s head protection piece, a safety change prompted by recent events such as Jules Bianchi’s fatal accident. This area of the chassis must now be able to withstand 50kN of force – a substantial increase of 35kN from 2015 – presenting a stiff challenge in the crash tests.

Ferrari have gone for what appears to be the most common solution so far (after seeing initial images of the Mercedes W07 and Williams FW38) by straddling two smaller wastegate pipes eitherside of the main exhaust. This has prompted the redesign of the rear wing’s mounting pylon, as the popular ‘Y-lon’ configuration of last year cannot be used as it is interrupted by the addition of the two smaller pipes.

At the moment the SF16-H has a central pylon that angles forward slightly and passes through the engine cover, presumably through the central exhaust pipe and then fixes to the gearbox case below. Toro Rosso came up with this clever design midway through last year and could well be copied across the grid.

As is common with all launch cars, there is little to tell about the new Ferrari’s rear end except for that it is pretty much all last year’s for testing purposes, and to keep their ideas hidden from rivals.

Ferrari have, however, displayed that they will keep the multi-slotted floor ahead of the rear tyres, a concept that McLaren cottoned onto at the back end of the last season and one that many teams will probably follow. These slots generate vortices in the airflow before it is projected into the gap between the rear tyre and the floor/diffuser. This offsets turbulent flow known as ‘tyre squirt’, preventing it from impinging against the low pressure region beneath the car and therefore improving the performance of the diffuser.