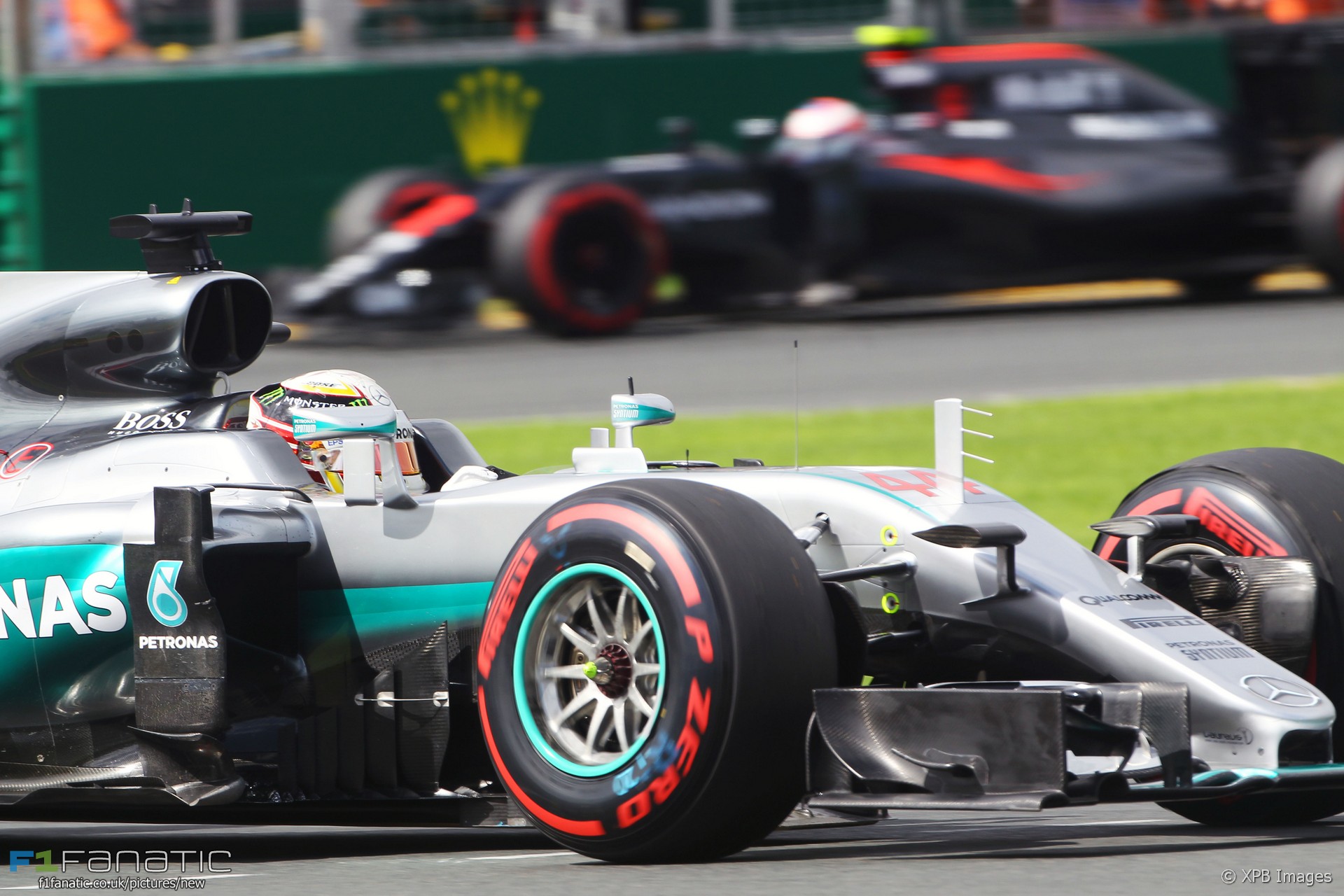 In the round-up: Lewis Hamilton says the constant need to manage tyre degradation has a negative effect on racing.

"I just want to attack the guys in front, going like hell trying to get past. But I can’t because I’ve got to look after my tyres to get to the end of the stint. That’s not racing."

"Having three compounds in the race, which was a change we promoted from the middle of last year as being something that would add uncertainty and excitement to the race, I think we’ve seen that play out really well."

Max Mosley: Horror crash would have killed Alonso 15 years ago (The Telegraph)

"You wouldn’t know for sure without a detailed analysis but generally speaking those sorts of accidents resulted in serious injury or death."

Arrivabene: We were confident Ferrari would win (Crash)

Ferrari 'shot themselves in the foot' (Autosport)

"Ferrari shot themselves in the foot. I don't really understand what their thinking was."

"I don't know and I don't care. Normally I should be miles ahead. It should be fine."

Congratulations to Romain Grosjean - your Driver of the Day (F1)

"Note - in the interests of fairness, multiple votes identified as originating from the same source were not counted."

"Channel 4’s two and a half hours of coverage, fronted by Steve Jones and David Coulthard, was around twice as long as BBC1’s highlights last year, and peaked with 2.7 million viewers."

Video of the @alo_oficial/@EstebanGtz crash shot by a fan on the inside of turn three: https://t.co/2ihux5NdJo #F1

Don't understand the complaints from some about Verstappen's aggression and tough talk. #F1 already has its quota of well-behaved robots.

Creo que se refieren a mi… I guess….it's me! Hora de subirme al avión y descansar unos días para recuperarme bien. Gracias a todos!! Time to take the plane and rest couple of days for a full recovery. Thanks to all of you!! #suerte #luckyman #seeYouNextYearAustralia

Is there too much nepotism in Formula One?

We talk about pay drivers all of the time, but we never seem to complain about sons of successful fathers doing well. It’s not the same as crappy pay drivers getting onto F1, but it is similar in a way. I hear Mick Schumacher is the next on the radar.

Is the sport so elite now that you can’t get in unless you have a father to show you the ropes? I am not saying that Verstappen, Sainz, Rosberg and Palmer (sort of) aren’t good drivers, but for sure they got the training of their fathers and good F1 contacts to ensure that they rose the ranks quickly.

It just seems that you are either a pay driver or a son of someone important these days. There are only a few that get in by talent alone without either money or good pedigree.

Just over half of the drivers either didn’t get here solely because of money or a father in the know. And this is the most talented field that may ever have graced F1. All I can say is that my dad is a bad dad for not being in F1 in his lifetime. Damn him for being one of the best marine engineers in Australia. I could have been one of the greats I tell you!
@MickHarrold

Five years ago today Jenson Button became the first driver to lap the Mount Panorama circuit in Australia, home of the Bathurst 1000, in a Formula One car as part of a publicity stunt for McLaren:

141 comments on “Tyre management ‘is not racing’ – Hamilton”