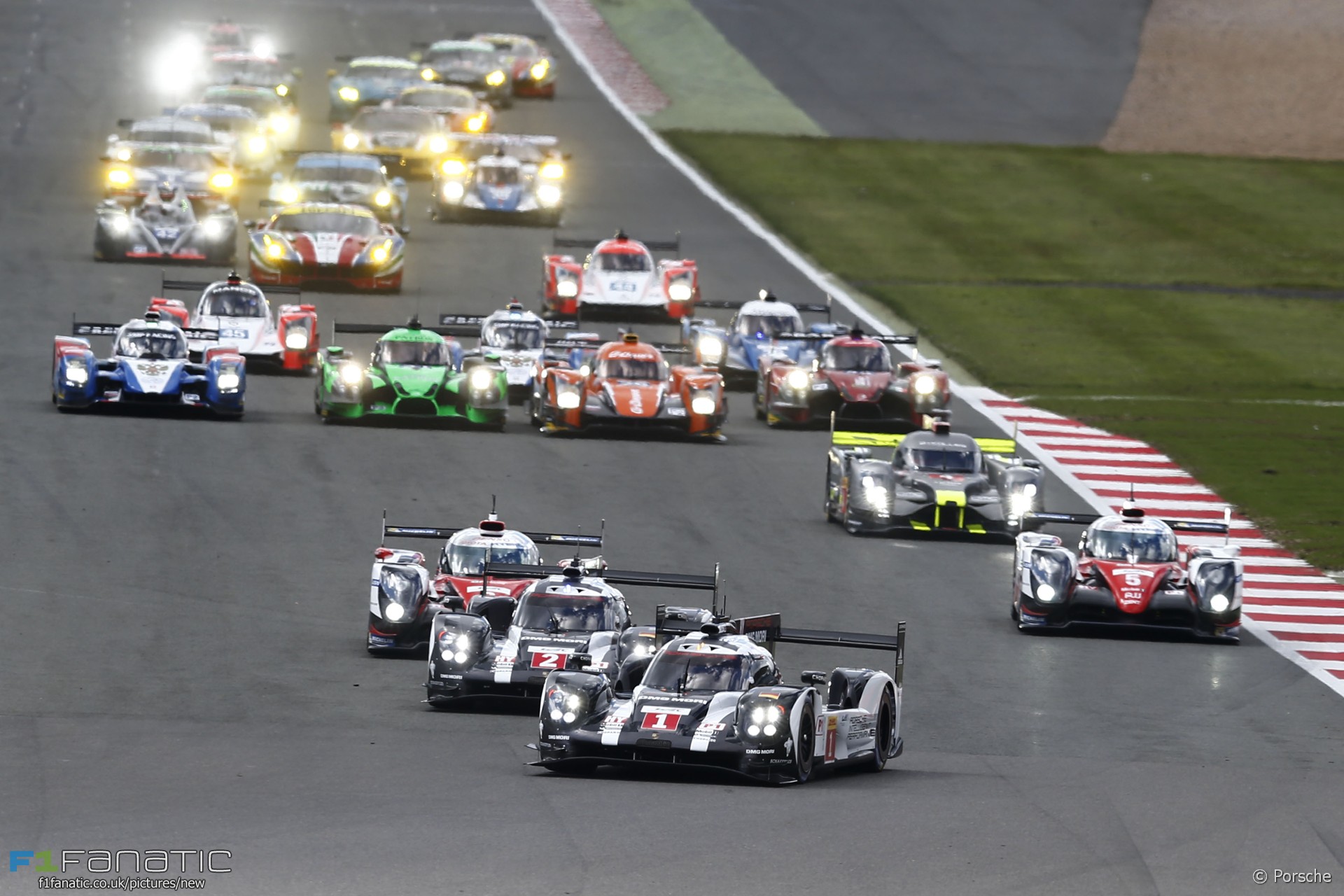 The World Endurance Championship kicked off in dramatic style at the Six Hours of Silverstone as all three leading LMP1 teams suffered problems with at least one of their cars – and the race winner was disqualified.

There was also dispute over the winner at IndyCar’s third round of the season in Long Beac hafter the stewards handed down a surprisingly light sanction for a pit lane infraction.

There was also tin-top action with the V8 Supercars racing at Phillip Island, the World Touring Cars at the Solvakiaring, and the British series at Donington Park.

Audi initially took the win in the first WEC round at Silverstone courtesy of Andre Lotterer, Benoit Treluyer and Marcel Fassler. However the number seven car failed a post-race technical inspection which found excessive plank wear on the underside of the car and was disqualified.

That handed victory to the Porsche of Romain Dumas, Neel Jani and Marc Lieb – however Audi has served notice of its intention to appeal the decision.

Porsche had been within six seconds of Audi before suffered a puncture which forced their second pit stop in three laps and left a final margin of 46 seconds.

A major talking point was a crash involving the Porsche of Brendon Hartley, who collided with the Gulf Racing Porsche GTE Am car, pitching the prototype up into the air and almost rolling. Meanwhile the number eight Audi came to mechanical grief under the ensuing full course yellow and the number five Toyota was delayed by a right-rear puncture.

The Morand Ligier of Ricardo Gonzalez, Felipe Albuquerque and Bruno Senna won the LMP2 class, GTE Pro and GTE Am both went the way of Ferrari with Davide Rigon and Sam Bird and Francois Perrodo, Emmanuel Collard and Rui Aguas respectively.

Simon Pagenaud’s first victory as a Penske driver was overshadowed by a controversial call by the race stewards on his final pit stop. Scott Dixon was bearing down on Pagenaud as the race leader emerged from the pits and the Penske clearly cut the line marking the pit exit. However the points leader was let off with a warning – a decision which guaranteed him victory.

Helio Castroneves had led the majority of the race but lost the lead to Dixon after Ganassi played a tactical blinder by pulling him in for an early pit stop when the leader his traffic.

As in the opening round Hugo Valente took the reverse-grid pole position but got away poorly, dropping to fourth. Tiago Monteiro won the first race (see first video) for Honda ahead of the independently-run Citroen of Mehdi Bennani and Honda team mate Rob Huff.

Citroen’s Jose Maria Lopez took race two (above right) honours from third on the grid, ahead of pole-sitting team-mate Yvan Muller and Nicky Catsburg. Lopez took the lead at the start, but was later overtaken by Catsburg, but not before the Lada driver made contact with Muller dropping the Frenchman behind Monteiro. Late on Catsburg struggled on old tyres, leaving a thrilling last lap where both Lopez and Monteiro got past.

The second running of the MAC3 lap time contest arguably provided the best action of the weekend, with Honda and Citroen setting exactly the same lap time and receiving ten manufacturers’ points each.

Petter Solberg started 2016 in the same vein as 2015 with a win in Portugal, after a thrilling final ahead of Robin Larsson and Topi Heikkinen. Sebastien Loeb finished his WRX debut in fifth for Peugeot, while DTM regular Mattias Ekstrom and last year’s frontrunner Timmy Hansen both went out in the semi-finals.

Ford Focus RS made its debut, with Andreas Bakkerud finishing 4th and Ken Block failing to progress from the qualifying heats, while the SEATs of Reinis Nitiss and Rene Munnich both failed to go through as well.

Siblings Ricky and Jordan Taylor shared the top step in Long Beach and defended their 2015 victory as Chevrolet swept the podium. Christian Fittipaldi lined up on pole position but was beaten into turn one by Ricky Taylor, yet finished second with Joao Barbosa. Eric Curran and Dane Cameron completed the podium in third.


Scott McLaughlin dominated at Phillip Island, winning both races as he looks to bounce back from a miserable 2015 campaign. He led from the start and saw off Chaz Mostert at turn one to hold a lead he never relinquished and take the first non-Holden victory of the season. Jamie Whincup was second with Mostert set for third until a last lap puncture lost him twenty places in half a tour, Fabian Coulthard snatching the podium.

McLaughlin eased to a second victory in race two despite a late safety car, which was followed by an error from Whincup while trying to take the lead, dropping him to fourth. Reigning champion Mark Winterbottom inherited second while Scott Pye took the third step.

Carl Edwards took the victory at Bristol from pole position as Dale Earnhardt Jr recovered from falling two laps behind to take second place. Kurt Busch, Chase Elliot and Trevor Bayne filled the top five in a race that included 7 seven leaders and 15 cautions, including one for Kyle Busch who hit the wall on lap 258.

Deleztraz’s hopes of another win in race two ended when he tangled with Vaxiviere at the start but he recovered brilliantly to take fifth place. He shares the points lead with Aurelien Panis – another son of a former F1 driver – who beat pole sitter Dillmann off the line and went on to win the race. Rene Binder completed the race two podium.

Mat Jackson took the opening win at Donington Park after the race was red flagged due to beached cars and a Subaru ablaze on the pit straight. Front row pair Ash Sutton and team mate Josh Cook struggled off the line, allowing Jackson into a lead he never relinquished. Collard followed through past Sutton and later took second from Cook while Ingram replicated the moves and was up to third, therefore completing the podium when the red flag was shown.

Collard took race two honours ahead of Jackson and Aron Smith after another action packed race. The BMW got the usual quick getaway, moving into third behind Jackson and Ingram into Redgate. Mat Jackson tried to control the pace from the front following the early safety car, but behind Collard was working his way through the podium placings, eventually picking off Jackson to take victory.

Matt Neal won from Gordon Shedden in a Honda 1-2 in race three to be the sixth winner in six races this season. Tordoff finished third from pole after he and team-mate Jack Goff – both on the soft tyre – led from the line. Just past mid distance, Goff’s pace dropped off allowing both Hondas to pass, and he eventually fell to 6th. The Hondas then set about Tordoff, taking the top two spots just two laps from the end.

Tumo Kinnumen took his and his Westwood teams first career victory ahead of temporary team mate Nathaniel Powers, but not before Powers was knocked out of the lead by back marker Hiroto Nakumaya, hitting his team mate and lightly damaging both their front wings while recovering. Behind them however was Franklin’s Elroy Wagner, who beat reigning champion team mate Enrique Ruiz to the line and wrapped up the 2015 drivers’ title as a result.

Nico Rosberg kept up his 100% winning record in 2016 with victory in China, extending his consecutive win streak to six. Sebastian Vettel recovered to second after hitting team mate Kimi Raikkonen at turn one with Daniil Kvyat completing the podium. Reigning champion Lewis Hamilton finished seventh after starting from last due to an MGU-H failure in qualifying and a collision at turn one with Felipe Nasr.

Next weekend Indycar, Formula V8 3.5, NASCAR and WTCC run again and the Super Formula championship – complete with McLaren junior Stoffel Vandoorne – kicks off for 2016. Euro F3 support the WTCC at the Hungaroring, Formula E run in Paris for the first time, the WRC heads to Argentina after a long break, and the 2015 Formula Virtual season ends in Fuji, Japan.