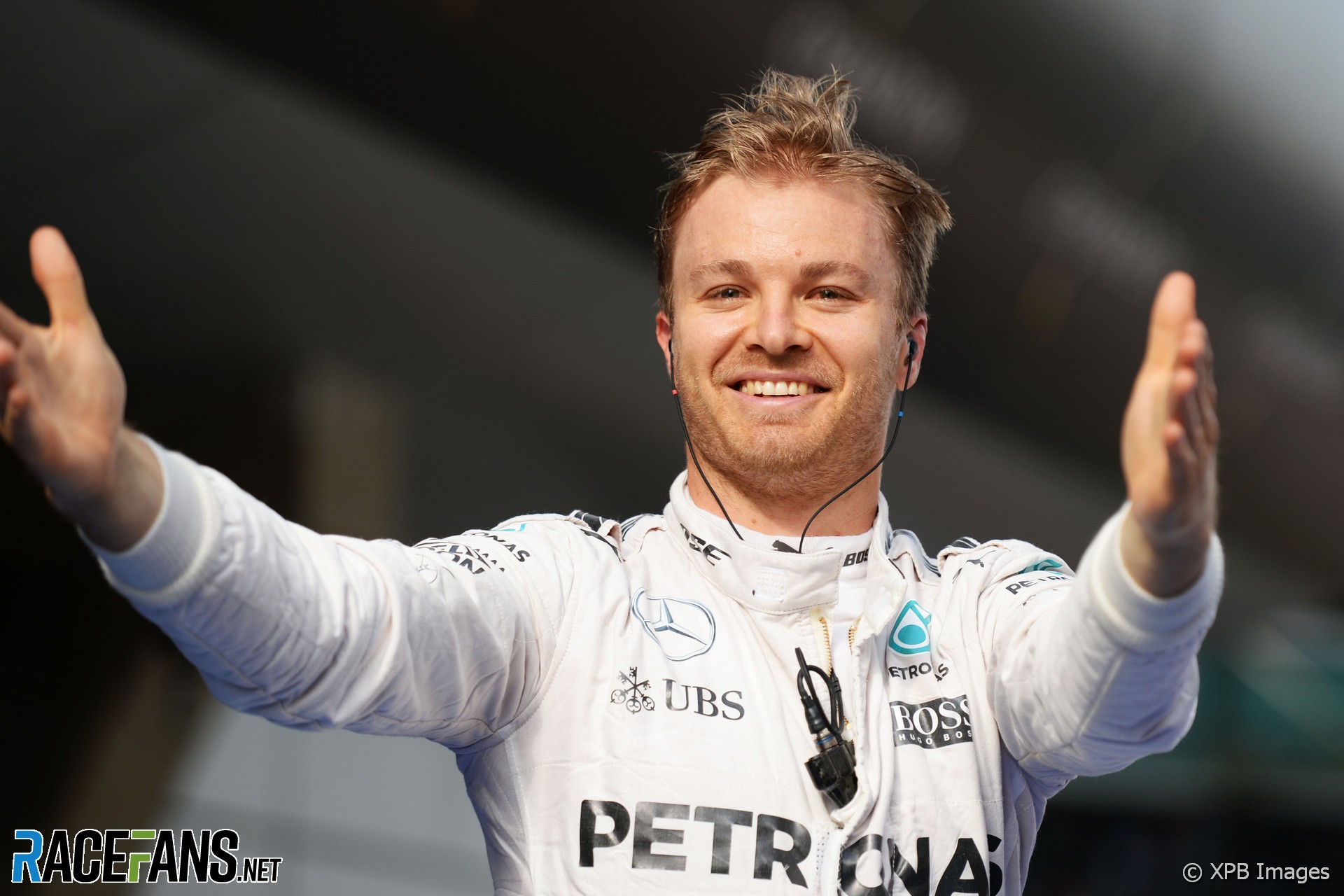 Nico Rosberg produced another ‘stealth victory’ in China – romping off into the distance as the challenge from his closest rivals fell apart spectacularly.

A sub-par weekend for Ferrari reached its nadir when the team’s drivers collided at the start. That compromised Lewis Hamilton chances, which were already looking weak after he lined up at the rear of the grid. An inspired Daniel Ricciardo stepped up to take the fight to Rosberg – and suffered a puncture four laps in.

As the sport continues to embroil itself in frustrating off-track controversies, the fans who got up, stayed up or turned up to watch the third round of the season were rewarded with another highly entertaining motor race.

Red Bull leads – but not for long

As the lights went out, Mercedes sustained their 2016 streak of their pole-sitting driver immediately losing the lead. This was not unexpected: with Rosberg on soft tyres and Ricciardo alongside on grippier super-softs, the Red Bull’s superior traction easily won the sprint to turn one.

But the drama of the sole front-running Mercedes losing the lead was immediately eclipsed by the sight of Sebastian Vettel’s Ferrari skidding into the sister car.

Daniil Kvyat had pinched the inside line to turn one from Vettel, who slewed wide into the other SF16-H. Kimi Raikkonen had been minding his own business around the outside of turn one, but he became the primary victim of the clash, losing his front wing and scrambling to rejoin the track as the chasing pack engulfed him.

“I had no chance to avoid,” an angry Vettel reported on the radio. He was painfully aware that Ferrari chairman Sergio Marchionne had appeared at the Ferrari garage to watch his company’s vastly expensive F1 programme blow its chances for the day.

“I had the Red Bull coming on the inside like a madman,” Vettel continued. The stewards took no interest in what was evidently a racing incident.

The contact between the Vettel and Raikkonen proved to be the catalyst for the highly entertaining racing that was to follow over the course of the afternoon. In the ensuing chaos, Felipe Nasr took avoiding action and struck Hamilton, shearing the front wing off the W07. That made the world champion’s quest for points finish even more difficult.

Romain Grosjean had also lost his front wing, and by now the Shanghai was littered with carbon fibre. Leader Ricciardo’s hopes of using the clean air in front to his advantage were crushed when his left-rear tyre suddenly disintegrated along the back straight. That gifted Rosberg the lead and prompted an appearance by the Safety Car.

A flurry of pit lane activity followed with many drivers opting to take advantage of the early opportunity to rid themselves of the unfavoured super softs.

Force India’s drivers were running fourth and fifth, and as they hit the pit lane together Nico Hulkenberg decided to back off so he would be struck behind the team’s other car. He held up Max Verstappen by doing so, and Vettel darted past the pair of them. Hulkenberg later picked up a penalty for driving unnecessarily slowly.

The action in the pits was frantic: Jenson Button also nearly made contact with the Hulkenberg/Verstappen queue as they passed rows of waiting mechanics.

After the field filtered back on track, Rosberg remained at the head of the field. Vettel, Ricciardo, Raikkonen and Hamilton lay 15th, 17th, 19th and 20th respectively. The scene was set for a frantic race – and a rewarding afternoon’s work for Rosberg.

As the green flag flew Rosberg made his escape, building up a lead he would hold until the end. Ricciardo, Raikkonen and Hamilton each began their own fight backs through the field, but it was Vettel – the only driver to switch to super softs under safety car – who gained the most ground.

The Ferrari made quick work of the opposition ahead, jumping up 11 places to fourth within five laps of the restart thanks to quick moves on the likes of Rio Haryanto, Nico Hulkenberg, Carlos Sainz Jnr and Jenson Button.

It wasn’t all smooth sailing, however, as contact with the Williams of Valtteri Bottas on lap ten incurred more front wing damage. It didn’t deter him from making another move, on Fernando Alonso’s McLaren, and fortunately for Vettel his Ferrari did not seem to suffer too much from the compromised aero.

After pitting for softs, Vettel appeared on the tail of the same Red Bull driver he had accused of making a “suicidal” move on him at the start. But despite the Ferrari’s rapid charge back up the field suggesting that the SF16-H really did have solid pace around the Shanghai circuit, Vettel was unable to offer a genuine challenge.

Ferrari’s attempt to undercut Red Bull was foiled when Vettel’s former team brought their man in to cover, but with fresh softs underneath him, Vettel was quickly on the back of Kvyat’s medium-shod car and with DRS, there was little the Russian could do to defend his position.

Vettel’s recovery to second was an impressive feat but Ricciardo’s journey back up to fourth was arguably even more improbable. Forced to pit after his dramatic puncture, Ricciardo was then further compromised by the Safety Car dropping him even further down the field. When the race resumed, the ‘honey badger’ was in full attack mode.

A masterclass of aggressive but controlled racing in the thick of the pack saw the Red Bull driver pull off a brilliant double move around the long first turn to pass Hulkenberg on the inside and then drive around the outside Jolyon Palmer for good measure.

Despite soon being joined in his journey back up the field by Hamilton’s Mercedes, Ricciardo was never put under any serious pressure from the world champion until Hamilton undercut his way past in the pit stops.

Opting for the medium compound for his final stint, Ricciardo topped his earlier heroics by closing up to Hamilton with fresh tyres and pulling a great move on the inside to take fifth from the Mercedes before following that by passing Massa’s Williams for fourth half a lap later.

Although a 17-second gap to Kvyat by this stage ultimately proved insurmountable, the fact Ricciardo was able to close on both his team mate and Vettel’s Ferrari ahead by around half a second a lap showed a podium finish had definitely been on the cards before his early puncture.

Raikkonen resisted the temptation to blame his team mate for his ruined race after recovering to fifth place at the flag. He passed Hamilton and the two Williams drivers in a battling final stint.

The reigning champion was unable to find a way by Massa for sixth place. Despite carrying race-long damage, Hamilton felt a better result still could have been possible.

Massa himself was very happy with his afternoon’s work, specifically with how he had managed his tyres throughout one of the only two stop races of the day.

A lengthy stint on mediums at the end of the race did not pay off for team mate Bottas, however. The second Williams was demoted to tenth by Verstappen and, on the final lap, Sainz.

And after a dream start to Haas’s first foray into Formula One, there were no birthday treats for Grosjean who struggled with major balance issues following his first lap contact. Grosjean even suggested retiring the car in the final laps at the end of a “horrific race” to a lowly 19th.

Rosberg pulls ahead in points race

The untroubled Rosberg ticked down the laps as he pleased, out of the sight of the both the cameras and his rivals. At the same venue where he took his breakthrough victory four years ago, he completed a hat-trick of 2016 wins to take a valuable 36-point lead in the championship.

Despite the chaos of the opening laps, all 22 starters saw the chequered flag. But after Rosberg crossed the line the wait for the next car lasted more than half a minute.

With Rosberg running away untouched to victory, Hamilton suffering from a compromised race and Ferrari not able to realise their full potential yet again, the opening rounds of 2016 have all shared a similar pattern.

It remains to be seen if this year really will prove to be the best opportunity Nico Rosberg will ever have to become world champion, but if someone doesn’t break the pattern soon, there may not be anything left to overshadow this Mercedes driver come season’s end.