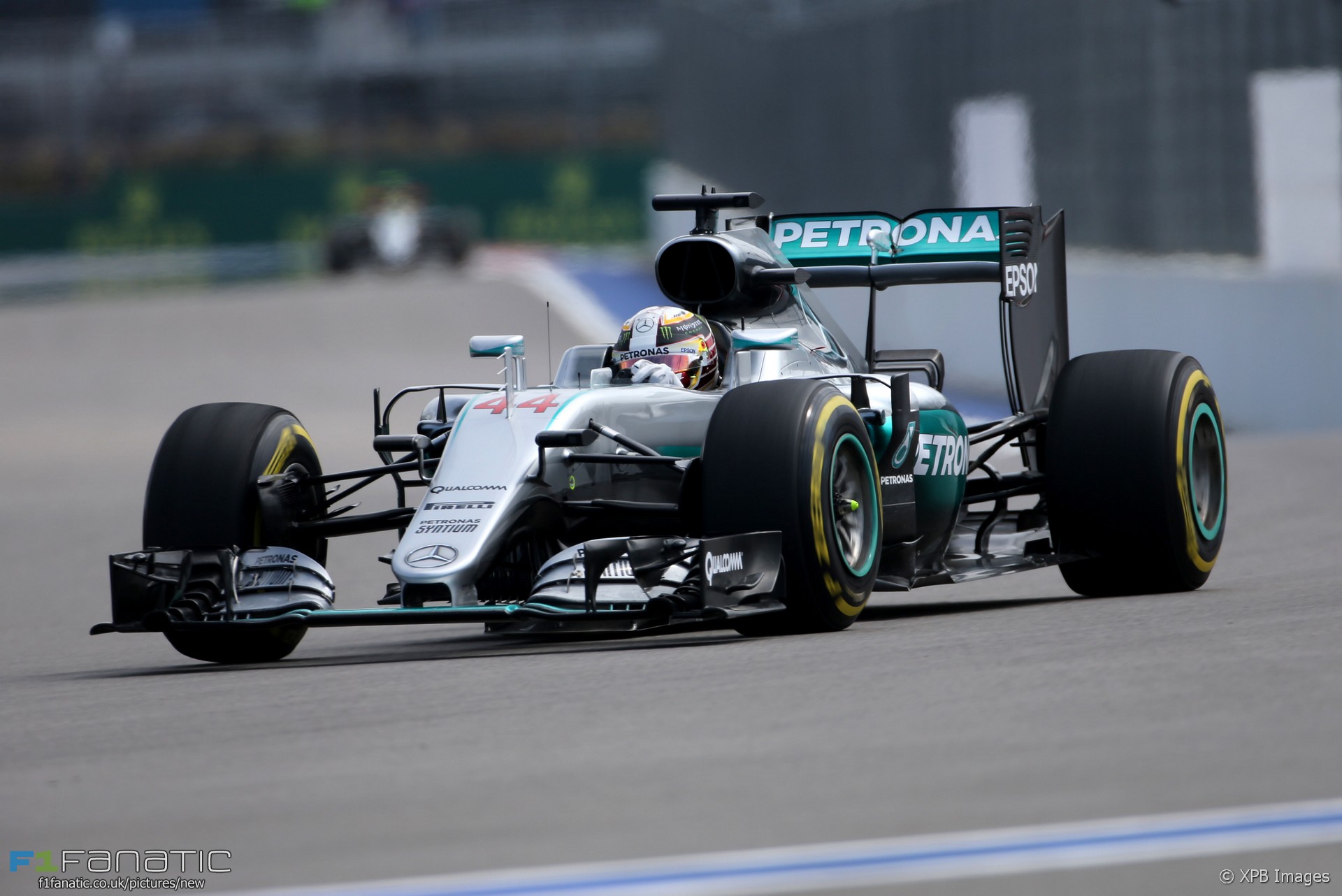 So far the Russian Grand Prix weekend is shaping up much like the three that preceded it: Mercedes are talking up the threat from Ferrari, but the red team have tripped up long before race day.

“I think we’re looking strong here,” said Lewis Hamilton after heading Friday’s running by more than half a second, “but we need to keep working hard if we are to try and stay ahead of the Ferraris”.

“They look like they might be another step closer this weekend,” he added. They may well be, but one of their cars has already suffered two setbacks. Sebastian Vettel missed out on the chance to do a long run on Friday due to an electrical problem. Soon after came the news he will also take a five-place grid penalty.

That leaves Kimi Raikkonen as the sole unhindered Ferrari taking the fight to Mercedes. Last year he qualified a few tenths down on Vettel and the gap between them during qualifying today was much the same.

The red cars were already looking anxiously over their shoulder at Red Bull. Daniel Ricciardo smells blood, and demonstrated remarkable pace on the harder soft compound tyre in practice (see graph below).

Raikkonen’s long-run pace on the super-soft tyre was decent, but no one looks likely to have a problem making the rubber last long enough to one-stop. Ricciardo may have the option of pitting very early to pinch or protect a place from one of the red cars.

A single stop still looks very likely to be the preferred strategy although teams will be keeping a close eye on how well the track improves over the next two days, particularly as the surface temperature has been warmer than expected – almost twice what we saw in the rain-hit Friday running last year.

It’s a sign of how hard Ferrari are pushing Mercedes that both teams have turned up with significant upgrades to parts of their power units architecture. Mercedes’ incorporates new engine oil from lubricant supplier Petronas.

However Mercedes may have another advantage available to them again, as seen in China. Their performance advantage over a single lap may be sufficient for them to get through Q2 on soft tyres instead of super-softs, meaning they can start the race on what is expected to be the more preferable tyre.

If that is the case – and their second practice performance indicates it is – Ferrari can forget about challenging for the win here.

McLaren have flattered to deceive previously on Fridays this year, but their prospects of getting at least one car into Q3 nonetheless look promising.

“We’ve been quick on Fridays before,” admitted Jenson Button, “and we know that we face the prospect of having to save some fuel in the race – but hopefully we’ll be able to knock on the door of Q3 tomorrow and be capable of scoring some points on Sunday.”

Reaching Q3 brings disadvantages as well as advantes, Button noted. “If we can qualify inside the top ten tomorrow, we’ll be somewhat limited on tyre choice, but it’ll be possible to race well from there. You’re with the quicker cars, able to run in the DRS and can let them pull you along.”

Proceding beyond Q1 is the goal for Sauber, but Felipe Nasr is in a more optimistic frame of mind after whitching chassis for this weekend. “The car is a lot more together compared to the previous race weekends.”

A potential scalp for Nasr in Q1 could be Jolyon Palmer, who for the second weekend in a row is having a tough time in the Renault. “I wasn’t able to get a good balance or find the sweet spot today which is always a little frustrating,” he said.

Similarly Romain Grosjean’s struggles at Haas have continued into a second weekend. During practice he commented his VF-16 has the same problem he experienced at the last race.

“We didn’t have a very easy day trying to assess how to work our tyres and how to work the car,” he said. “We’re struggling a little bit today, but I’m sure the guys are going to react well.”