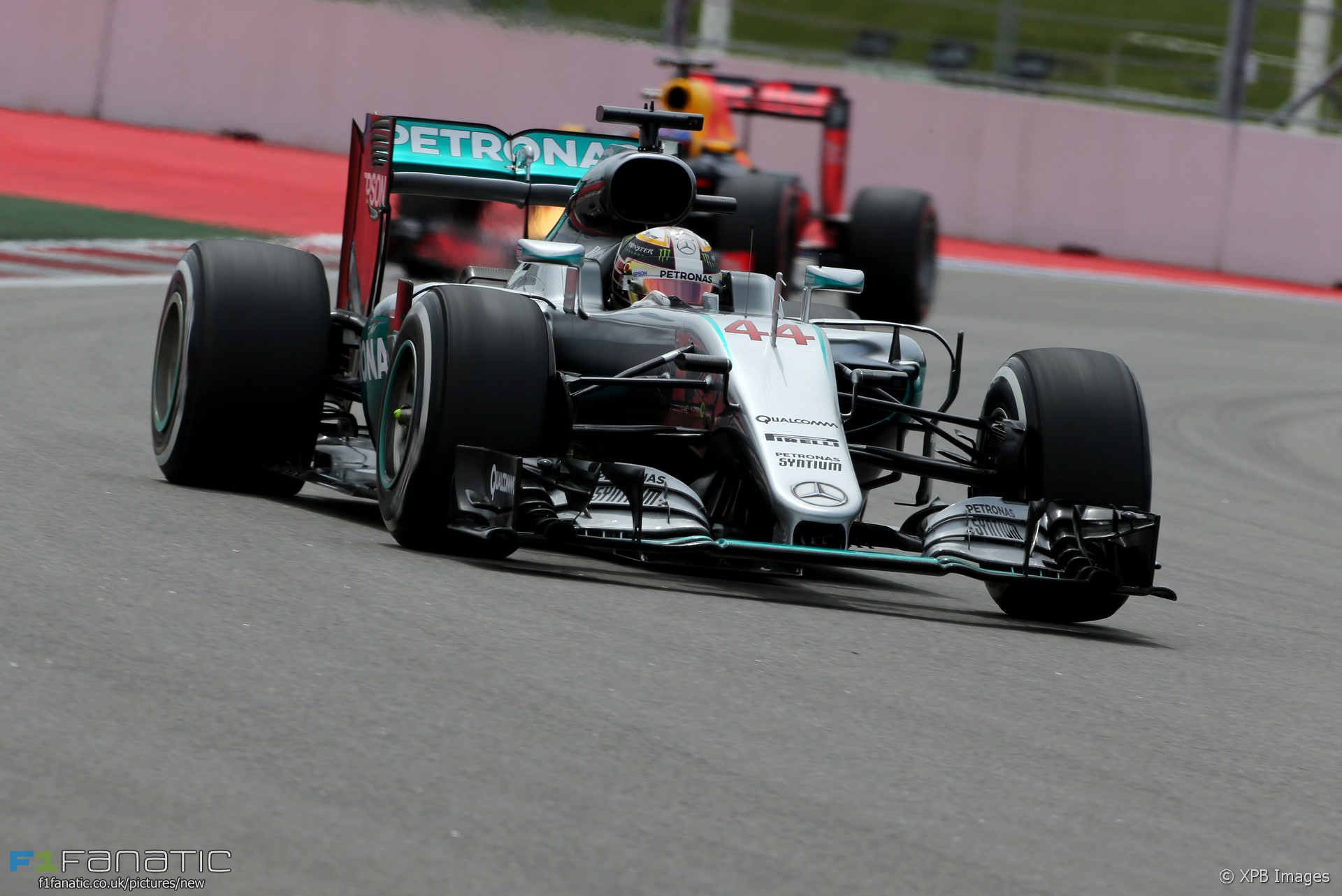 Will Lewis Hamilton really have as much trouble getting back to the front of the field in Russia as he says he expects to?

After all, just two years ago Nico Rosberg recovered to finish second despite being forced to pit on the first lap of the race.

As things stand, Hamilton will line up tenth on the grid for Sunday’s race. He is only on his second engine so he will not be penalised is he takes a third. But he is already locked in to starting the race on the super-soft tyres he used in Q2 just before the power unit failure which harpooned his chances of taking pole position.

The first job for Hamilton tomorrow is to stay out of trouble on the run through turn two. This has proced a trouble spot in the two years since the Sochi Autodrom opened. Starting on the outside, Hamilton will have to be prepared not only to take avoiding action if there is trouble around him.

And if he does, he must not make the mistake he did in qualifying of not following the correct route back onto the track. He’s only one reprimand away from a ten-place grid penalty – a threat which will hang over him for the rest of the season.

Assuming he makes it through the opening corners unscathed and doesn’t repeat his sluggish getaways of Australia and Bahrain, the potency of the Mercedes engine should help him make progress. Every single Mercedes-powered car was quicker than every single non-Mercedes powered car in the speed trap.

Even so overtaking will be tricky – the slowest car through the speed trap is only 7.2kph down on Hamilton (see below). And the strategy options look decidedly limited for Hamilton and his rivals.

The low-grip nature of the Sochi circuit means the tyres can easy last long enough for a single pit stop to be possible. Had Pirelli chosen to bring the new ultra-soft tyre here things might have been different, but as there wasn’t time to test it before teams had to make their tyre choices for this race, they chose to err on the side of caution.

A two-stop strategy would involve making an early first pit stop, coming in after around a dozen laps while the one-stoppers hang on until closer to lap 20. The risk element of this approach is fairly high if the driver gets stuck in traffic. But the performance advantage Mercedes enjoy anyway plus the fact Hamilton has more sets of new tyres available could make this an attractive choice, especially if he gets stuck in traffic early on. It would certainly play to Hamilton’s attacking style.

One of the most interesting propositions for the race is Valtteri Bottas, who will make his third start from the front row. With Hamilton and Sebastian Vettel compromised on the grid he has a decent shot at taking the first podium finish of the year for Williams.

The team have sharpened up their act in the pits this year and with a diminished threat from Red Bull, Bottas is well-placed to avenge. He has good form at this track: he was on the podium in 2014 and would have been last year until Raikkonen took him off. The Ferrari driver lines up right behind him on the grid, so look out for a resumption of hostilities between the two.

Red Bull have had a quieter weekend so far at a circuit which hasn’t suited them very well. However their race pace should be strong. Daniel Ricciardo, who starts fifth, ran a long stint on softs on Friday which suggests the team may be considering an early pit stop and a long run to the end, playing to that strength.

Sergio Perez will occupt Force India’s highest starting position of the year, sixth, at a track where he excelled last season. This is a chance for the team to turn its sluggish start to the season around, although their tyre degradation so far this year hasn’t been as well-managed as it was last season.

How high can Hamilton climb in Russia? Will this be another straightforward win for Rosberg? And can Bottas deliver a podium for Williams?

Share your views on the Russian Grand Prix in the comments.

25 comments on “Another race of damage limitation for Hamilton”