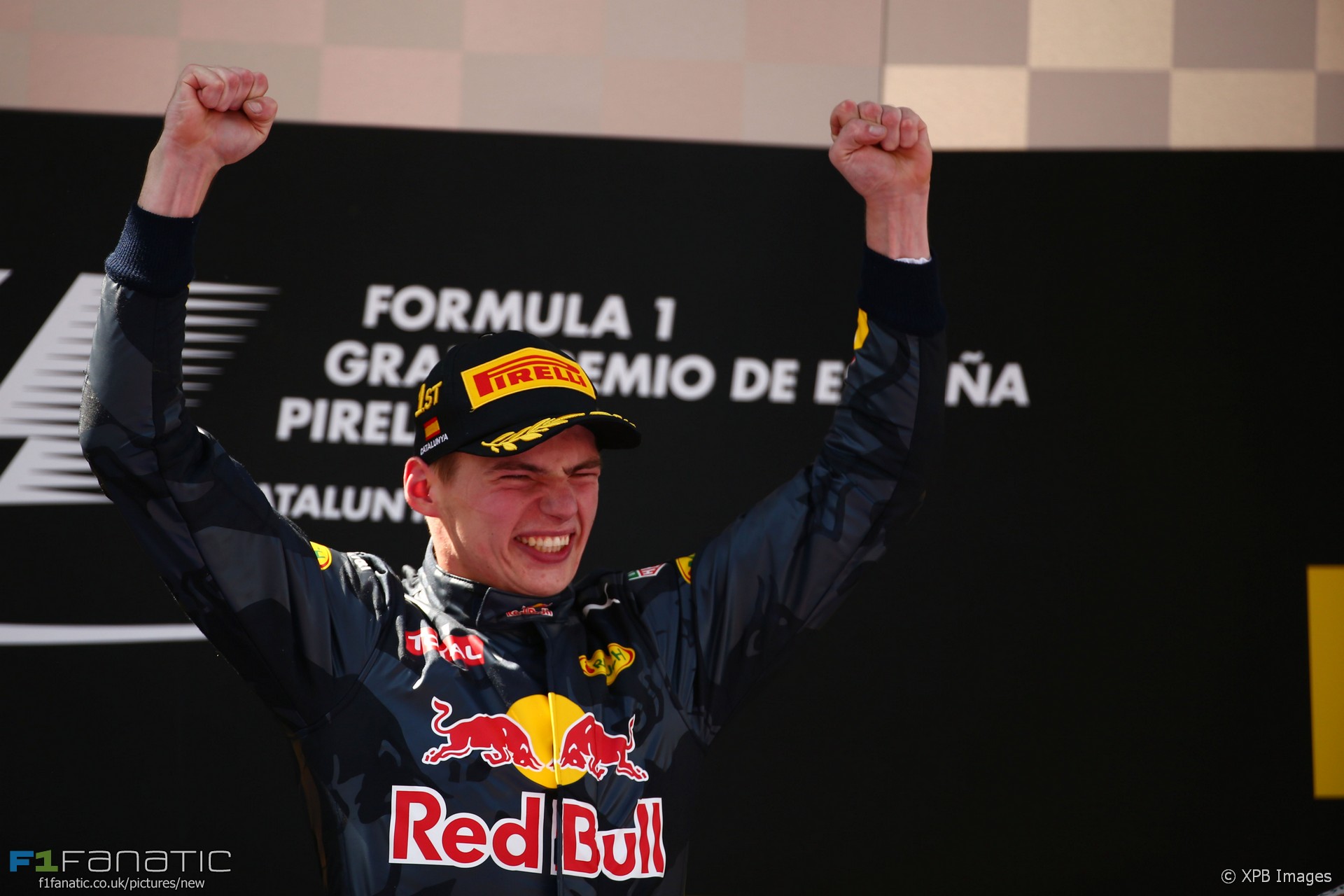 Max Verstappen didn’t just break the record for youngest ever F1 race winner yesterday: he obliterated it, and left it at a level where it is unlikely to ever be beaten.

At 18 years and 232 days old, Verstappen is over-two-and-a-half years younger than the previous holder of the record. That was Sebastian Vettel, who Verstappen shared the podium with yesterday and who is not far off being a decade older than Red Bull’s newest winner.

Vettel has held the record since his breakthrough triumph in the 2008 Italian Grand Prix. He can at least point out he took fewer starts to achieve his first win than Verstappen:

We now have our first race-winning driver from the nineties but we’ve skipped most of that decade to find that winner – Verstappen was born in 1997. As the FIA banned drivers under the age of 18 competing in Formula One in reaction to Verstappen’s race deal, his record will be very difficult to beat.

Verstappen became the youngest driver to lead a lap (beating Vettel’s record from the 2007 Japanese Grand Prix), and the first Dutch winner and race leader. The Netherlands is the 22nd different country to produce a race winner, 64 years after holding its first round of the world championship and 31 years after its last.

This was also Verstappen’s best starting position – fourth – and the first victory in F1 for car number 33. However he lined up behind team mate Daniel Ricciardo, who along with Romain Grosjean sustained his unbeaten qualifying record against his team mate so far this year.

It was the first victory for engines branded as TAG Heuer, though of course the power unit is in fact a Renault. McLaren won 25 races with TAG-branded Porsche engines in the eighties.

Verstappen replaced Daniil Kvyat at Red Bull for this race. With Kvyat moving over to Toro Rosso, this was the first time two F1 drivers have swapped seats between consecutive races since the 1994 European Grand Prix, when Johnny Herbert moved to Ligier in place of Eric Bernard, who in turn took Herbert’s race at Lotus. Coincidentally Herbert changed places again at the very next race, taking over the Benetton seat previous occupied by Verstappen’s father Jos.

The last driver to win a race on his debut for a new team was Fernando Alonso at Ferrari in the 2010 Bahrain Grand Prix. That race was also followed by another new winning driver and team combination – Jenson Button at McLaren.

While Verstappen was achieving his first win, Kvyat scored his first fastest lap – and the first for Toro Rosso, in their 190th race.

Kvyat was reunited with Carlos Sainz Jnr, a driver he has been team mates with three times before: at Eurointernational in Formula BMW Europe in 2010, at Koiranen in Formula Renault 2.0 in 2011 and at Arden in GP3 in 2013.

A driver from Verstappen’s past enjoyed success on the morning of race day. Alexander Albon, who beat Verstappen to the 2010 KF3 karting World Cup crown, won the GP3 support race.

A long streak of Mercedes success was broken when Lewis Hamilton and Nico Rosberg came to a stop in the turn four gravel trap on lap one. Had either of them won this race Mercedes would have equalled McLaren’s all-time record of 11 consecutive grand prix victories.

Rosberg also missed his chance to equal the record for most consecutive wins at the start of the season – a fifth would have equalled Nigel Mansell’s feat from 1992.

Instead Mercedes ended a 62-race streak of consecutive points finishes, the third-longest in F1 history. The last race which did not feature a Mercedes in the points was the 2012 United States Grand Prix.

As a consolation for the silver team they did pick up their 58th pole position which moves them ahead of Red Bull into fifth place on the all-time table. They’ve been on pole for the last 11 races in a row but managed a streak of 23 over the past two seasons – and even that left them one short of Williams’ all time record.

Although Mercedes locked out the front row again, Red Bull got closer to them in qualifying at the Circuit de Catalunya than any other team has in the V6 turbo era. They were 0.68 seconds slower at a track generally seen as a reliable barometer for the rest of the season. Hamilton’s pole position time, a numerically satisfying 1’22.000, was 2.046s slower than the circuit record set in 2009 by Rubens Barrichello.

For a track with a reputation for processional races, the Circuit de Catalunya is at least supplying variety in race winners. Verstappen was the tenth different winner of the Spanish Grand Prix in the last ten years. Not since Schumacher four-race winning streak of 2001-04 has anyone taken consecutive wins at this track.

However Rosberg has the chance to win the same race for the fourth year in a row when the teams assemble for the next round at Monaco next week.

Have you spotted any other interesting stats and facts from the Spanish Grand Prix? Share them in the comments.