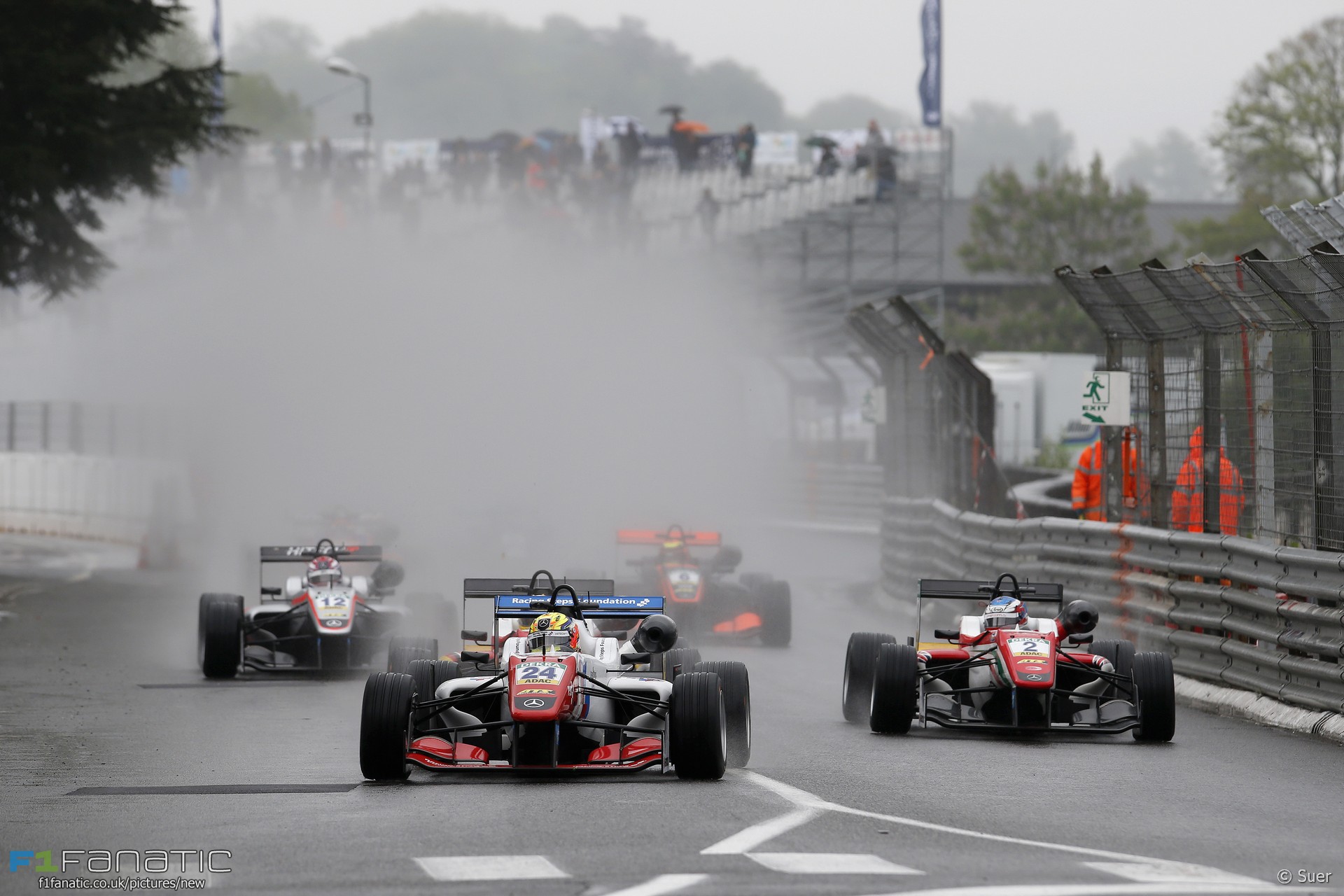 With seven different winners in the first nine races the European Formula Three championship is wide open. Catch up on all the action from Pau plus the rest of the weekend’s racing highlights.

Lorandi hit back in the only dry race of the weekend (below) to take his maiden victory in the series and add his name to the prestigious Pau Grand Prix trophy. A great start from pole position saw him run to the chequered flag uncontested. Behind him Cassidy and Sette Camara collided, triggering an accident which eliminated Zhi Cong Li and David Beckmann, and left others with damage.

Second place for Stroll moved him into the head of the championship lead while Russell capped an impressive weekend with a second podium.

Round 5 of 16: Grand Prix of Indianapolis

Pagenaud started on pole but had to fend off late attacks from Conor Daly and Helio Castroneves who benefited from a caution period. Castroneves finished runner-up and James Hinchcliffe competed the podium while a collision at turn one on the opening lap saw Tony Kanaan and Sebastien Bourdais retire.

A 17-car pile-up brought out the red flags at Dover on lap 354 after Jimmie Johnson hit trouble on the front row, his car refusing to change up from second gear. Martin Truex Jnr and Kevin Harvick piled into him, setting off a chain reaction which blocked the track.

Mattias Ekstrom took his second victory in as many races and claimed the championship lead after dominating the Belgian round. He beat Sebastien Loeb and Petter Solberg in the final having won three of the four qualifying heats and his semi-final.

Anton Marklund finished fourth in the final having led into turn one, while local hero Francois Duval took fifth in a one-off entry in his home race. Johan Kristoffersson finished sixth with technical dramas, while Timmy Hansen and Reinis Nitiss were among those who failed to progress from the semi-finals. Ken Block had a miserable weekend, finishing last in two of the four heats and failing to qualify.

The Indy Lights double-header at Indianapolis began with a thrilling win for Ed Jones who fought back after being bumped down to third place after a restart with four laps to go (see first video). Race two saw former Red Bull junior driver Dean Stoneman take his first win in the category. Seven races in, Jones remains the only driver to have won more than once in the closely-fought championship.

Max Verstappen took a shock victory on his debut for Red Bull in the Spanish Grand Prix after the two Mercedes drivers collided on the opening lap. Kimi Raikkonen and Sebastian Vettel completed the podium for Ferrari.

GP2 and GP3 also bregan their new seasons in Spain. Red Bull junior Pierre Gasly looked on course to finally end his victory drought after leading the GP2 feature race from pole position. But he succumbed to a late attack from by Norman Nato and was relegated to third by Nicholas Latifi. Sergey Sirotkin spun away a potential podium at turn one causing one of three Safety Car appearances, the last ending the race after Antonio Giovinazzi punted Raffaele Marciello out of eighth place.

It was later discovered the chequered flag had been shown too early so the results were declared after 33 laps instead of 37. This restored Marciello to eighth and reverse-grid pole and also cancelled Alex Lynn’s pass on Sergio Canamasas for fifth place. Artem Markelov was fourth.

Marciello lost his print race lead to Lynn who went on to claim victory. Gasly fought through to finish runner-up with King completing the podium, but again the race ended under the Safety Car after a Giovinazzi was sent flying by Sean Gelael. Remarkably, the stewards took no action.

GP3’s first race weekend with its new 2016 chassis was rather more sedate. The new cars seemed able to follow each other more closely but the racing remained lacklustre. Ferrari junior Charles Leclerc beat pole sitter Jake Hughes to turn one the line to win the opening race, while Alexander Albon rocketed from third on the grid to the lead in race to take his first victory ahead of Oscar Tunjo and another Ferrari junior, Antonio Fuoco.

What racing action did you watch last weekend? And what will you be keeping an eye on this weekend? Let us know in the comments.

Next weekend open wheel fans can enjoy more European F3, Formula V8 3.5 and the penultimate round of the second Formula E season. The grid will also be decided for the 100th Indianapolis 500. Tin-top enthusiasts are served by the DTM and Australian V8s, plus the World Rally Championship continues in Portugal.