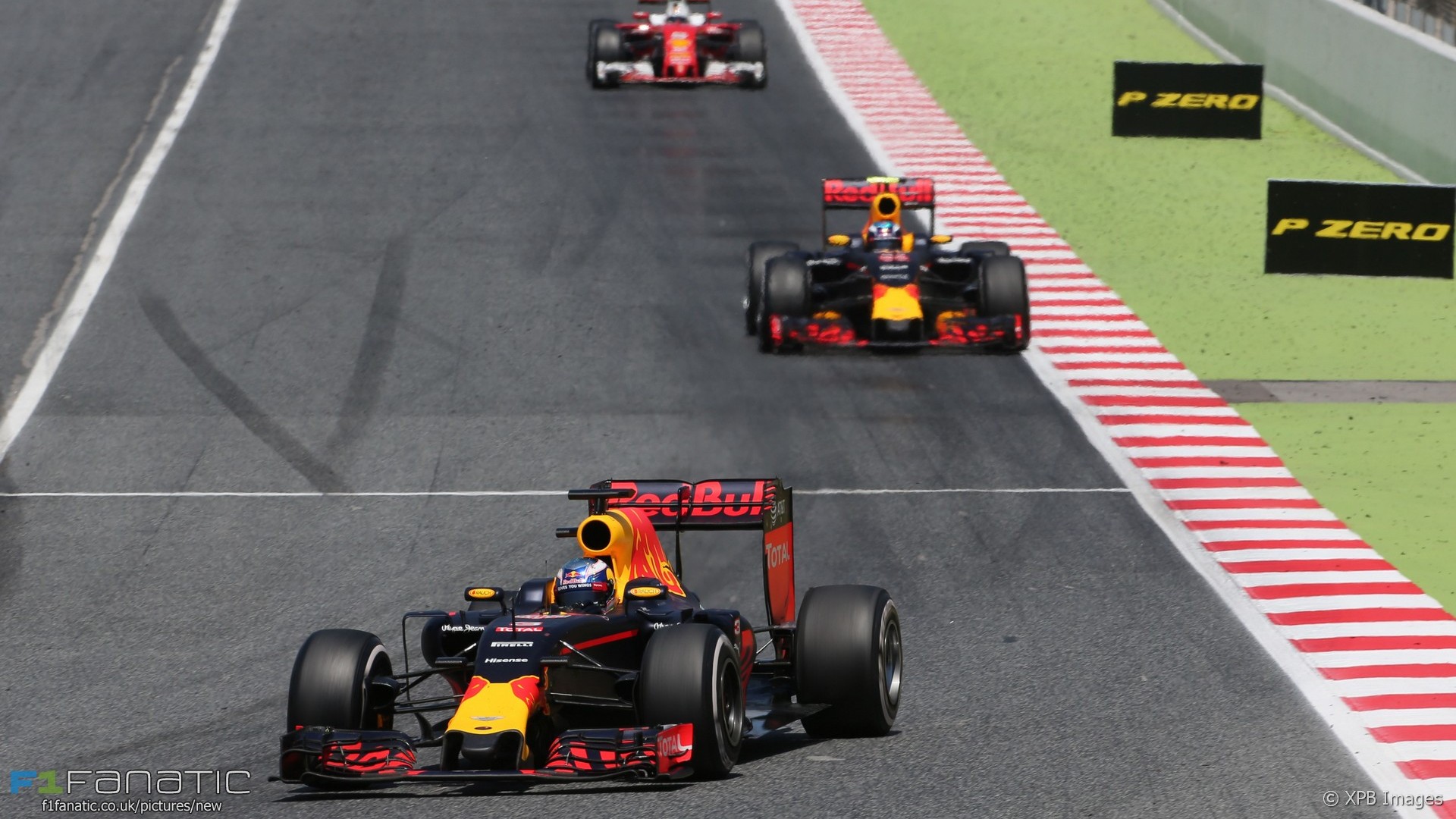 After the race said team mate was unimpressed. “We threw the win away” lamented Daniel Ricciardo following his mid-race tactical switch.

On lap 16 at the Circuit de Catalunya Red Bull’s cars were running first and second but it was clear the chasing Ferraris had the potential to beat them. Before the race Christian Horner had said he was surprised his team had out-qualified the red cars, who lost their way with set-up in qualifying, but that Friday had shown Ferrari’s race pace was at least as good as Mercedes’.

Sure enough, after Sebastian Vettel and Kimi Raikkonen emerged from behind Carlos Sainz Jnr’s Toro Rosso, Red Bull’s lead was eroded. Vettel had cut Ricciardo’s six second lead to two, and the pair had Verstappen between them. Vettel was clearly the greater threat as Raikkonen was around three seconds further behind.

By lap 27 fifth-placed Valtteri Bottas was far enough behind that Red Bull could bring either of its drivers in without them getting stuck in traffic. Both Red Bull and Ferrari could afford to try a three-stop strategy. Whoever pitted first and gained the benefit of the undercut – being first to run on fresher, faster tyres – would be at a clear advantage.

Why Red Bull pit Ricciardo on a three-stop strategy

Ricciardo’s slim lead over his two pursuers was compressed to just two seconds over the course of laps 24 and 25. This was because Rio Haryanto came out of the pits in front of him and stayed there for two laps – this made possible by him having fresh tyres, the best engine in F1, and yellow flags in the final sector for Nico Hulkenberg’s stationary Force India preventing the Manor from being passed there.

When Haryanto did get out of the way he let all three by at once. Red Bull were now on red alert: with the trio covered by two seconds Vettel could potentially pass either or both their cars if he pitted right away and switched to a two-stop strategy.

As Lewis Hamilton had demonstrated last year, converting to a three-stop strategy could give a faster car such as Vettel’s the means of getting ahead of a Red Bull potentially without even needing to make a pass on the track. If he did have to overtake Ricciardo or Bottas he would be much more likely to do so with fresh tyres in addition to the Ferrari’s horsepower advantage.

But of course if Ferrari could figure all this out, so could Red Bull. If Vettel converted to a three-stop strategy they could be certain he would be waved past Raikkonen and then he would be in a position to attack both of their cars with fresher rubber.

The only way Red Bull could protect themselves against this possible move by Ferrari was to guarantee it, by bringing one of their cars in early to take advantage of the same ‘undercut’ Vettel might exploit. With Ricciardo holding the biggest lead over Vettel at this point, he was the driver best-placed to succeed. His lap 28 pit stop for soft tyres – which would certainly not last the remaining 38 laps – was the moment they committed.

The gaps between the Red Bull and Ferrari drivers on every lap compared to the leader. Very large gaps omitted. Scroll to zoom, drag to pan and right-click to reset. Toggle drivers using controls below:

Why Red Bull kept Verstappen on a two-stop strategy

Once Ricciardo pitted, Ferrari followed suit with Vettel. So why didn’t Red Bull then put Verstappen on the same strategy as his team mate? After all had they brought Verstappen in on the same lap Vettel pitted he would have been guaranteed to stay ahead unless Red Bull slipped up in the pits.

However Red Bull also needed to cover off the threat from Raikkonen. This was not an immediate concern: the number seven Ferrari was 4.1 seconds behind when Verstappen inherited the lead. Red Bull didn’t need to bring Verstappen in immediately.

By the time Raikkonen closed anywhere near to striking range – 2.1 seconds – Verstappen was on lap 34 – half distance. Crucially, this gave Red Bull the opportunity to make Verstappen’s final pit stop his last. Nico Rosberg had covered 30 laps on a set of medium tyres the year before so Verstappen’s best chance of victory was to stick with a two-stopper and eke a set of mediums out for the remaining 32 laps. He did, and Raikkonen followed suit on the next lap.

When Raikkonen rejoined the track on lap 36 all the top four drivers had made two pit stops. But only Ricciardo and Vettel, running first and second, would need to stop again. For these three-stoppers their best chance of attacking for the lead would be to run their strategy as conventionally as possible to get the best life out of their current and final sets of tyres. That meant making a third pit stop around lap 41, as other three-stoppers such as Felipe Massa and Marcus Ericsson did.

Ferrari, however, again had the option of bringing Vettel in early and using the undercut to jump him ahead of Ricciardo. The downside of doing that would be that he would have to run his final set of tyres for longer, negating the benefit of running a three-stop strategy to begin with, and reducing his chances of catching and passing the leaders.

Would Ferrari stick for a safe third for Vettel with the remote possibility the leaders would wreck their tyres and hand him the win? Or would they shadow Ricciardo again and leave Vettel fought, but potentially much quicker at the end and able to chase the leaders down? They quickly opted for the former.

Vettel made his third pit stop on lap 37. This was just two laps after Raikkonen had made his second pit stop, which explains why Vettel had so little success chasing down the leaders. However it did ensure he would gain a place for Ricciardo when the Red Bull made his third and final pit stop.

Ricciardo came in on lap 43, giving him tyres which were nine laps fresher than his race-leading team mate’s. His initial lap times were around a second quicker, and until he drew close to Vettel on lap 53 he was often seven or eight-tenths quicker. But with Vettel able to lap almost as quick as him, Ricciardo’s hope of catching the leaders was ruined.

Ferrari’s decision to make Vettel’s third pit stop early proved a spoiler for the final laps of the race. Had they let Vettel run his third stint for as long as Ricciardo did, making his final pit stop one lap after the Red Bull, the final laps of the race would have seen Verstappen protecting his lead from Raikkonen while a flying Ricciardo and Vettel bore down on the pair of them.

But Ferrari valued a certain gain of one position over a potential gain for more positions, and it’s hard to argue with that. While Ricciardo was vexed about why he was put on a three-stop strategy in the first place, he should perhaps instead ask why he wasn’t brought in early to cover off that potential move from Vettel.

In the final reckoning, Red Bull had two cars ahead of two faster Ferraris at the beginning of the race. Given Ferraris pace its doubtful there was a strategy which would have ensured Red Bull a one-two finish.

By splitting strategies they successfully covered off the Ferrari threat so that one of their cars was in a position to come home first. It was Ricciardo’s misfortune that it happened not to be the car which was leading to begin with.