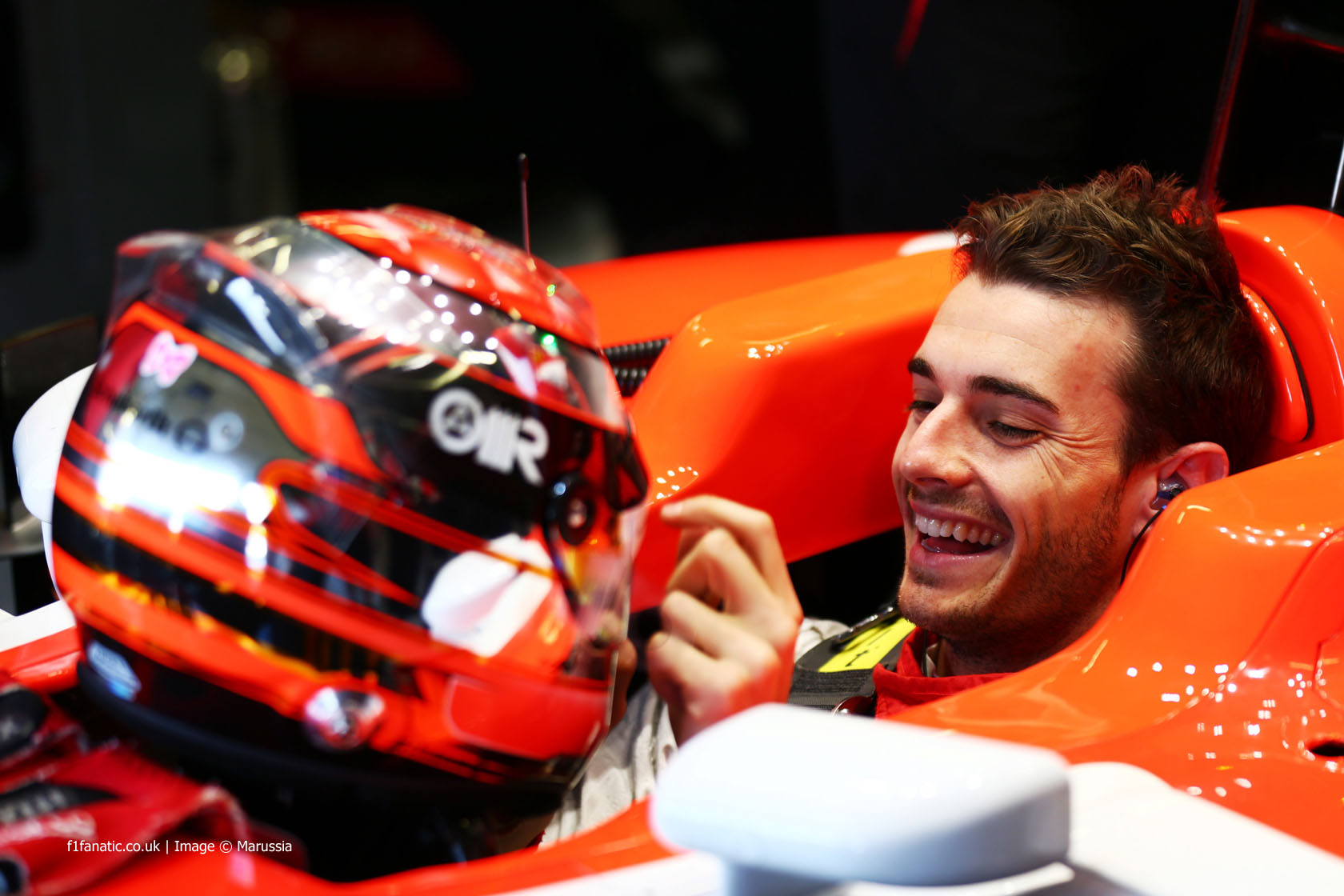 In the round-up: A new organisation has been set up in honour of Jules Bianchi, who died following a crash in the 2014 Japanese Grand Prix.

The parents of Jules Bianchi have formed a new organisation to help promote young drivers trying to reach F1.

"It’s tricky, and with the first race being Monaco where you have to put it inside the car and not let go of it is tricky for everyone."

"We have different solutions that we will find tomorrow. We keep trying. We try a couple and tomorrow we will find a place. Some of these places I cannot tell you now because it's 18+!"

"Even though I was massively frustrated with the outcome of Barcelona, I never thought anything suspect."

"It is believed there will also be a delay in paying the May salaries, which are due in a few days."

"I think that the potential of my dad didn’t come out fully - for many reasons. To start with he was teamed against a world champion - Michael Schumacher - and that is not easy."

"We changed the chassis to come here to make sure there is no doubt about it, and we did some good testing in Barcelona after the race, so I'm hopeful I can jump in the car, get some good sensations, and come back for a good grand prix."

"I think it's really just showing the growth between Nico and I. We spoke to each other today and in the past there would have been some kind of tension of some sort, but today it was just pure respect."

#F1 drivers giving canned answers fed to them by their PR. I want someone (cough Nico) to show their emotions!! pic.twitter.com/5BRCdaBne2

If you're not able to see the F1 driver press conference, Nico Rosberg is behaving as defensively as he did on lap 1 in Spain #MonacoGP

This pre-race drivers press conference seems to be more useless than usual! Nobody has actually said anything of substance!!

@andrewbensonf1 Most things with Nico are better kept internal – then silver washed. Adds real character to the conflict.

Well this is new. Race Control and lucky VIP's all in a brand new building at the pit lane exit #CroftysPics pic.twitter.com/2IobV1O3a8

Imagine if the first driver to fall foul of the new tear-offs rule was Hamilton, who is one reprimand away from a ten-place grid penalty…

Jack likes the look of Monza’s planned changes for 2017:

There’s more to a good layout than slow-corner overtaking opportunities. The great corners are high-speed ones which you approach at speed. Eau Rouge and Blanchimont at Spa, 130R and turn one at Suzuka, Parabolica at Monza. You lose Curva Grande but that hasn’t been a corner since the chicanes were put in, it’s just a curved straight.

Having the courage to have a kilometre-plus straight with a flat-out corner at the end instead of an obvious overtaking opportunity — to me, that is a courageous decision and is to be commended.

I do agree with the comment that there’s less need for the second chicane if you do this, at least in its current form. Though you might need to expand the run-off a little, which may not be easy, at the start of Lesmo One. there’s loads on the exit but if you go straight on you meet the wall pretty fast).
Jack

Happy birthday to Lustigson and Zazeems!

On this day 25 years ago Lauda Air Flight 004 from Bangkok to Vienna crashed, claiming the lives of all 223 passengers and crew.

Niki Lauda, who operated the airline, visited the crash site and met with representatives from Boeing, the plane’s manufacturer. He eventually pressed them to admit the crash had been caused by a fault on the aircraft which caused the thrust reverser on the left-side engine to deploy, putting the plane in an uncontrollable dive.