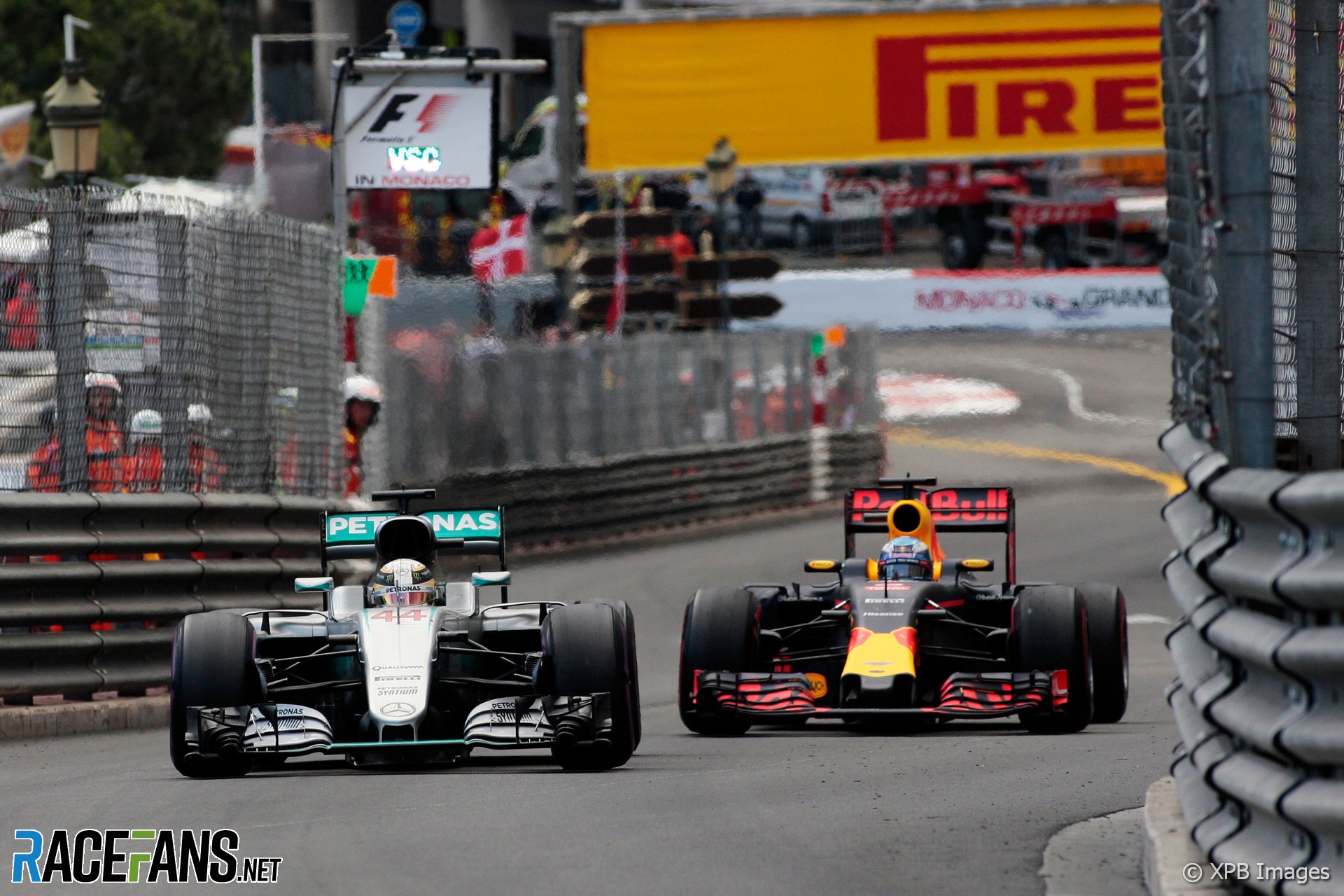 At just over three kilometres, the Monte Carlo street circuit is only slightly longer than the span of Daniel Ricciardo’s trademark grin.

And after the Red Bull driver secured the most important pole of the season ahead of the two Mercedes powerhouses and with a potential tyre advantage over the top ten, who could blame Ricciardo for his cheerful demeanour on Saturday evening?

After all, this was an irresistible opportunity for the Australian to emulate his fellow countrymen Jack Brabham and Mark Webber and win the Monaco Grand Prix.

But come Sunday evening, the trophy in Ricciardo’s hands was not the one he had dreamt of holding that previous night and the winning smile that has won him so many fans was nowhere to be seen.

Lewis Hamilton drove superbly to take an overdue first victory of his 2016 campaign. But the biggest story of the Monaco Grand Prix was how Red Bull had inadvertently sabotaged their most popular driver’s chances of victory for the second successive race.

Much pre-race chatter surrounded the possibility of rain on Sunday. And, for once, it wasn’t wrong: The heavens opened in the early hours of Sunday morning.

With heavy downpours soaking the track, it came as little surprise when the FIA announced that the Monaco Grand Prix would begin under Safety Car conditions.

Almost as soon as the race officially began at two o’clock, there was trouble. Daniil Kvyat radioed to his team that his car was stuck in a constant speed mode. It took two trips through the pits and the loss of a lap for the Toro Rosso to right itself.

After five laps behind the Safety Car, fans and drivers alike began to get restless, with Hamilton ad Kevin Magnussen urging race director Charlie Whiting over radio to start the race.

Finally, the grand prix started in earnest at the start of lap eight. Ricciardo made a strong getaway, pulling out a second over Nico Rosberg, who was pursued closely by Hamilton and Sebastian Vettel’s Ferrari behind.

But there was instant trouble as Jolyon Palmer lost control of his Renault on the pit straight, slamming into the outside barriers and spearing into the wall at Sainte Devote. The Virtual Safety Car was called, as the Monaco marshals cleared the track of debris from the single car accident.

When the race resumed, Ricciardo wasted no time in pulling a significant gap to the Mercedes behind as Magnussen was the first to gamble on a switch to intermediate tyres.

Kimi Raikkonen’s race ended sooner afterwards. The Ferrari driver struck the barriers at the hairpin and almost collected Romain Grosjean’s Haas into Portier while dragging his front wing under his Ferrari. Raikkonen finally decided to park his stricken car by the chicane, not far from where he boat was moored.

By now, Rosberg was visibly struggling for grip in the treacherous conditions, with Hamilton increasingly agitated behind his team mate.

Mercedes knew that with every lap Hamilton was stuck behind his team mate, their chances of challenging Ricciardo for victory were decreasing. The team told their championship leader to yield for his main rival and, to his credit, Rosberg duly obeyed – no protests, no fuss.

Rosberg admitted that surrendering the place had been ‘painful’, but showed the presence of mind to realise that to win a season-long war against a driver the calibre of Lewis Hamilton, you have to expect to lose some battles along the way.

By this stage several drivers had switched onto the intermediate tyres and the shallow-grooved rubber was starting to pay benefits. With Max Verstappen going fastest on them, Red Bull called their race leader in to switch onto the tyres himself, mirroring what Rosberg had done a few laps prior.

Curiously, Hamilton opted to stay out, inheriting the lead. Ricciardo took just four laps to make up the deficit to the Mercedes, but despite a significant advantage Ricciardo chose not to try and force his way past and instead wait for his opportunity.

Marcus Ericsson was the first to roll the dice on full dry tyres on lap 31 – which quickly proved to be the right move to make.

In came the entire field, with Hamilton finally discarding his full wet tyres for a switch to ultra-soft slicks. The unleashed Ricciardo produced a middle sector time which was over two seconds faster than Hamilton managed moments later, and as the Red Bull driver headed for the pits only a disastrous stop for him would hand the lead back to the Mercedes.

But that was exactly what Ricciardo got. As the RB12 coasted into to Red Bull pit box there were no tyres – wet or dry – to greet him. Thirteen agonising seconds passed before the team had scrambled to put a full set of super softs onto the RB12.

Ricciardo bolted for the pit exit, but the damage had been done. The lead was lost. Track position had been lost. And Ricciardo now had the almost impossible task of passing Hamilton on-track to claim back victory.

And things were about to get worse for Red Bull.

Having started from the back, Verstappen was making great progress through the field. Some skilful passes on Magnussen and Jenson Button had given him a shot at a decent points finish.

But after recovering to tenth, Verstappen compounded a weekend to forget by throwing it all away at Massenet, understeering into the outside barriers and wrecking his Red Bull for the second successive day. As with qualifying, the 18-year-old accepted full responsibility for his error.

As the race resumed following another Virtual Safety Car, Ricciardo was now all over Hamilton, almost running into the rear of the Mercedes in the tunnel.

Hamilton had all four wheels on the inside of the kerb at the chicane and Ricciardo tried to pounce, but the Mercedes driver shut the door on exit. Ricciardo was angry. The stewards investigated, but no further action was taken.

All this was had allowed third-placed Sergio Perez, on soft tyres, to catch up to the two leaders. The Force India driver had made a late switch to intermediates but timed a move to dry tyres perfectly, allowing him to jump ahead of Rosberg and Vettel.

Further down the field the Saubers of Felipe Nasr and Ericsson were stuck behind Romain Grosjean. The team instructed Nasr to let his team mate by to attack the Haas, but despite a direct order from the senior management, the Brazilian refused to yield.

A bemused Ericsson then decided to take matters into his own hands – with disastrous results. A late lunge into Rascasse saw the two Saubers collide with damage taking both cars out of the race.

The ridiculous action saw Ericsson earn a three-place grid penalty for Canada, while team principal Monisha Kaltenborn later described the behaviour of both drivers as ‘unacceptable’.

What had began as an unpredictable wet-dry race was by now displaying the usual hallmarks of a traditional parade around the streets of Monaco. Track position in the drier conditions was key, which played directly into the hands of Hamilton and fifth-placed Alonso, who were both under pressure from behind.

Ricciardo backed off for a handful of laps to try and save his tyres before mounting a renewed challenge for the lead, but with Hamilton now in a rhythm, the Red Bull never found the opportunity to take the fight to the Mercedes.

Vettel too was eating into the gap to Perez ahead, but a couple of small errors under braking put paid to any chances Ferrari had to snatch the final step on the podium.

Hamilton kept his focus and ticked off the laps to cross the line just before the two hour time limit expired and secure his first win of the season. Ricciardo finished seven seconds adrift and did not attempt to mask his frustration at having had his chances for victory scuppered through no fault of his own.

There was late drama, however, as the rains returned for a last lap cameo which saw some drivers forced to tip-toe around the final three kilometres to safely reach the chequered flag.

Rosberg exited Antony Noghes for the last time to find all traction had abandoned him on the greasy surface, with Nico Hulkenberg brilliantly taking advantage to jump the Mercedes at the line and snatch sixth place.

“Two weekends in a row I’ve been screwed”

Just as last year, the podium celebrations in the royal box had the distinct air of frustration and injustice for one of the three attendees. Ricciardo did not mince words.

“Two weekends in a row now, I’ve been screwed,” declared the second place man. “It sucks.”

Hamilton’s reaction to his 44th career win was more of satisfaction than elation, having come through a tumultuous start to the season to finally record his first win of 2016 in round six.

“Truly one of the hardest races I can ever remember having,” Hamilton said. “To stay in the zone, not make any mistakes and come out on top is just unbelievable.”

After Force India had targeted a strong result here, Perez was delighted to have produced another surprise podium appearance for the team at such a prestigious venue.

“I’m extremely happy, because my team has done a tremendous job with the strategy, with the calls and the pit stops,” Perez said. “It’s been an amazing day for us.”

But while Hamilton’s victory had helped him make a significant dent into Rosberg’s sizeable championship lead, there was a sense that Red Bull had lost this race perhaps as much as Mercedes had won it.

Even Helmut Marko admitted that the team had effectively gifted the race to their rivals, describing the error as a ‘human mistake’.

Mercedes had looked beatable in a straight fight for the first time since Singapore last year. When the Silver Arrows are vulnerable, their rivals know too well that they must make the most of the opportunity.

Daniel Ricciardo must now hope this does not prove to be his last such opportunity for 2016.