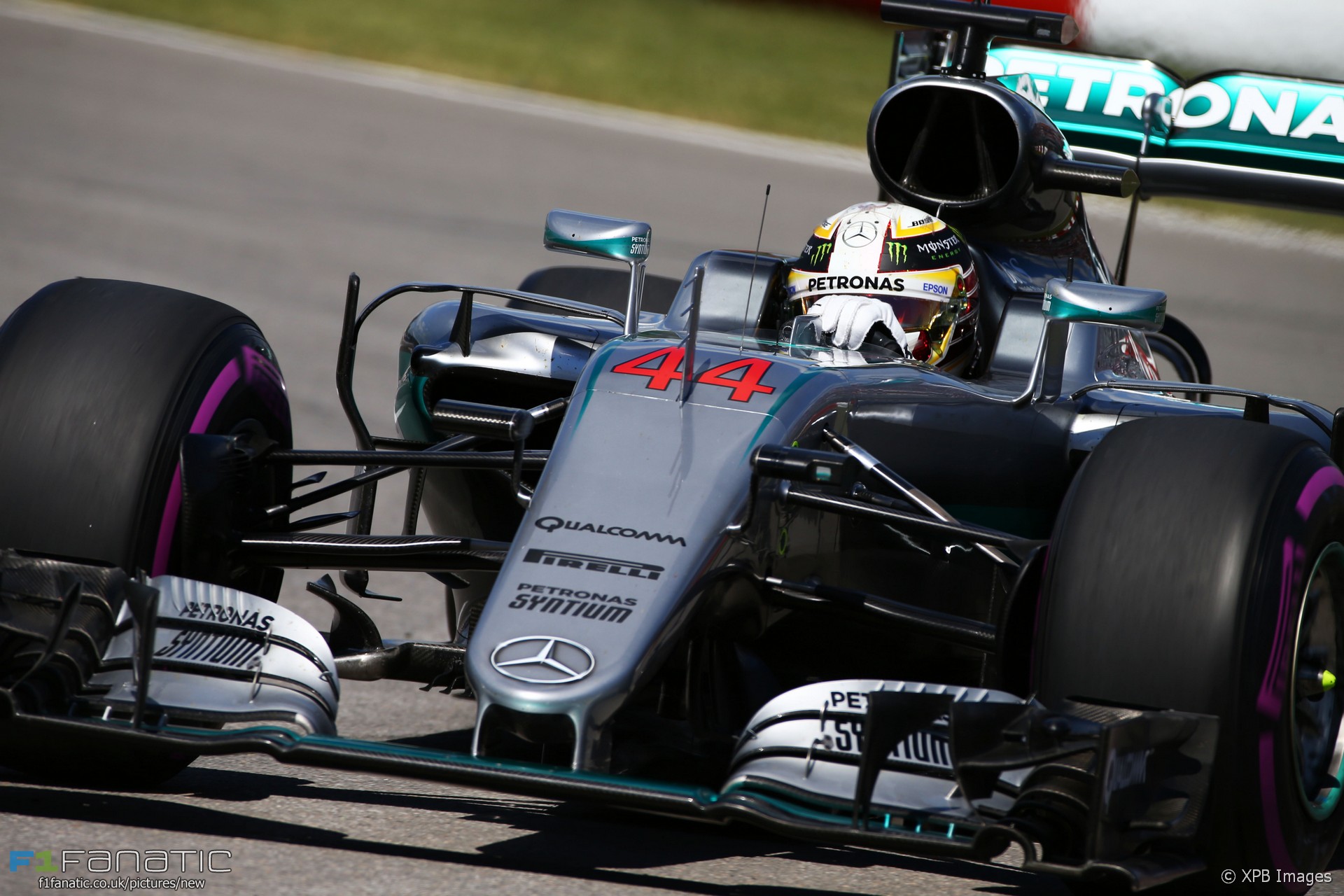 Lewis Hamilton didn’t have to stretch himself to set the quickest practice time on Friday in Canada – the Mercedes driver seems to have more in hand.

After setting the fastest time of the day with his first effort on the ultra-soft tyres, Hamilton continued for five more laps before pitting, indicating he had a fair amount of extra fuel on board when he set his best time.

Meanwhile other drivers found the ultra-soft tyres gave more performance later in their stints. It all points towards Hamilton having quite a bit of extra pace in hand.

The state of play between the two Mercedes drivers is hard to read, however, as it seems likely the pair were using different wing levels. Nico Rosberg was easily the fastest driver through the speed trap while Hamilton didn’t figure in the top ten, over 10kph down on his team mate.

That suggests Mercedes were comparing different set-up approaches at a track which demands a high-speed, low-drag configuration. While Rosberg was half a second off Hamilton’s pace on Friday, expect that to change tomorrow as the pair converge on set-ups.

Mercedes, like their rivals, will have to keep a close eye on the expected conditions for Sunday when it comes to setting their cars up for qualifying. The threat of a wet race is receding according to the latest forecasts, with rain now expected much earlier in the day, perhaps even on Saturday night.

Before then qualifying is set to take place on a warmer track which will have had the chance to rubber in. This will reduce the performance gap between the ultra-softs and the super-softs, which was around six-tenths of a second today. That could present Mercedes with the opportunity to get their cars through Q2 on super-softs and therefore start the race on the harder and strategically advantageous rubber – the tactics used by Rosberg in China and Daniel Ricciardo in Monaco.

The margins between those seeking a place in Q3 are very fine indeed. Fernando Alonso, whose McLaren team are in the thick of the battle, reckoned that not reaching the top ten and getting to start on harder rubber could be an advantage.

“I think that perhaps qualifying 11th will be the best starting position for the race as you’ll be the fastest runner free to choose your starting compound,” he said. “I reckon starting the race on the ultra-soft might not be ideal.”

Only two drivers from the top three teams did not use ultra-softs for their longest runs. They were Max Verstappen, who opted for the super-softs, and Kimi Raikkonen, who did a very long run on a set of softs at the beginning of the second session.

The other four used ultra-softs for their longest stints. Rosberg pushed his the furthest and they appear to have dropped off completely by around the 15th lap. That’s not far enough for a one-stop strategy to be feasible – which is exactly what Pirelli wanted after last year’s race.