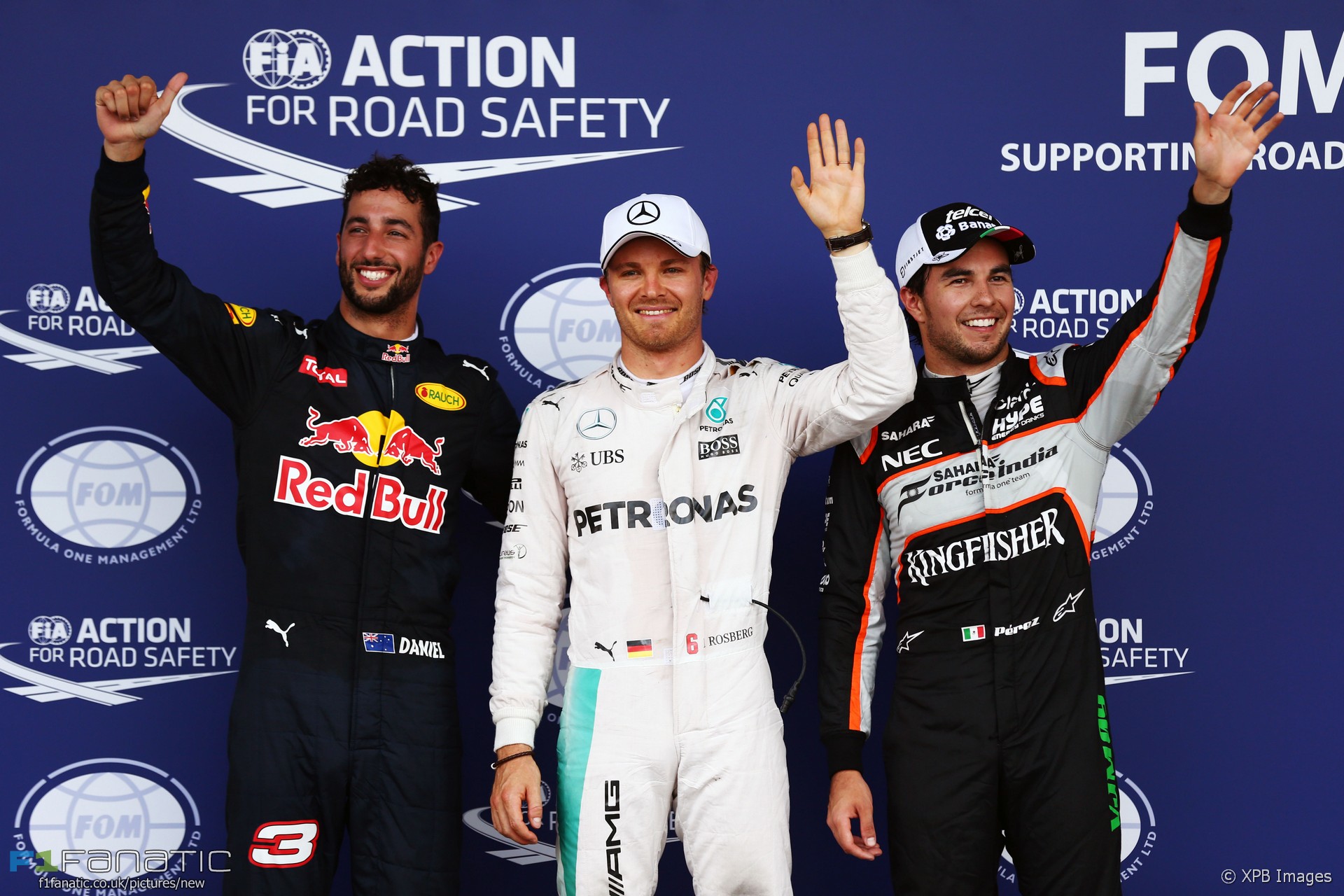 Nico Rosberg claimed pole position for F1’s first race in Baku after an error-strewn session by Lewis Hamilton ended with a crash in Q3.

Rosberg will share the front row of the grid with Daniel Ricciardo after the Red Bull driver improved his lap time in a rbief, two-minute window of running after Hamilton’s crash brought out a red flag.

Sergio Perez set the second-fastest time but will be relegated to seventh on the grid due to a gerabox change penalty.

Rosberg was the quicker of the two Mercedes drivers on their first laps, edging Hamilton by a tenth of a second. He improved again on his subsequent run while Hamilton slipped up at turn 15 and had to reverse out of the run-off area.

Ferrari left their runs until late in the session but easily made it through. McLaren did likewise, though it didn’t work out for Jenson Button. A mistake at turn 15 meant he had to run again, and after catching car after car in the middle second he abandoned his lap.

He took 19th in the final order behind both Manors. Felipe Nasr made it into Q2 but the other Sauber of Marcus Ericsson failed to join him. He lowered his lap time with his final run but it was only good enough to demote Kevin Magnussen to the back row of the grid alongside Jolyon Palmer.

Rosberg lopped over a second off his lap time in Q2 and not a single driver got within a second of him as Hamilton narrowly avoided being eliminated in the second phase of qualifying.

The world champion lost time in traffic on his first run and had to return to the track on a third new set of super-soft tyres while Rosberg remained in the pits having only used two. A second error by Hamilton at turn seven while he lay tenth in the running order left him with a single shot to ensure he proceeded to Q3. He made it, but it was a near-miss and he will have to start tomorrow’s race with flat-spotted front tyres.

Nico Hulkenberg, who had looked strong in practice, saw his chances of reaching the top ten slip away. He spun at turn 16 on his first run and failed to take advantage of his final run after a miscommunication with the pit wall. Meanwhile Sergio Perez in the team’s other car secured a place in the top ten, though he will take a five-place grid penalty following a gearbox change after his crash in practice.

Fernando Alonso was unable to continue his run of Q3 appearances and like team mate Button he had cause to be frustrated at the traffic around the circuit as he returned to the pits.

Hamilton’s scruffy session continued in the final phase of qualifying and at first it seemed it might be to the detriment of both Mercedes drivers. He locked up again at turn 15, running wide and costing Rosberg time as he had to back off for yellow flags.

Remarkably, that wasn’t the end of it. As he began his final run Hamilton clipped the barrier at the inside of turn ten, braking his front-right suspension. His session was over and with it his chances of starting anywhere higher than tenth.

In the meantime Sergio Perez had set the provisional pole position time followed by the two Ferraris. The red flags came out so Hamilton’s car could be recovered but not before Rosberg was able to cross the line and move back to the top of the times.

With two minutes left on the clock there was still time for drivers to do a final run. Rosberg stayed in the pits but the Red Bulls headed out to improve their times along with the Williams and Ferrari drivers.

Daniel Ricciardo grabbed the leading position and used it to full advantage, setting a lap of 1’43.966 to move up to third behind Perez. Behind him Sebastian Vettel set an identical time to within one-thousandth of a second, but as Ricciardo set his time first Vettel will line up behind him. That also secured a front row start for Ricciarod due to Perez’s gearbox change penalty.

Max Verstappen could only manage ninth after twice coming across Valtteri Bottas, expressing his frustration on the radio after being passed by the Williams.