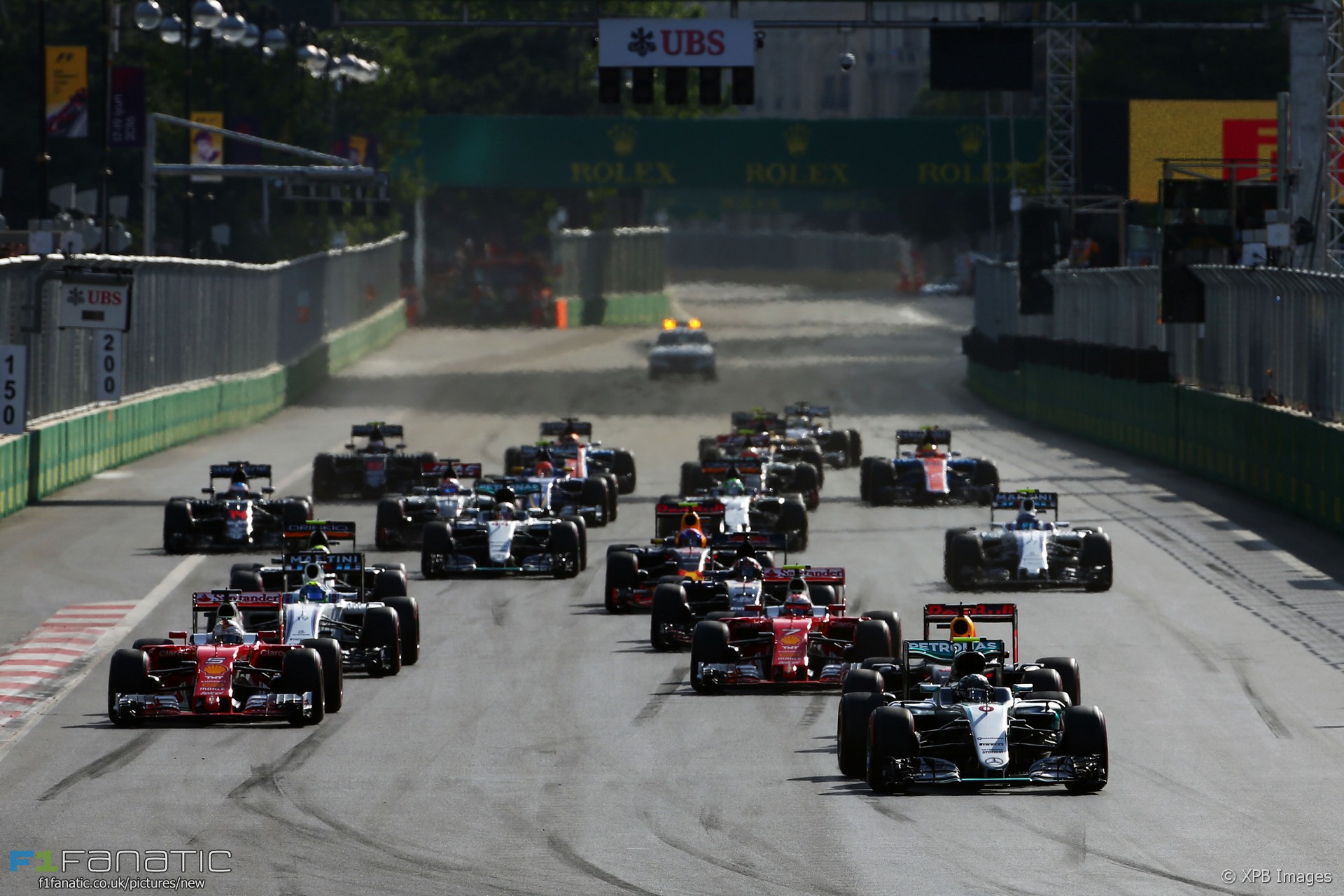 Nico Rosberg took an emphatic victory in Baku while several of his rivals further down the order also impressed. Here’s the ratings for the full field.

Lewis Hamilton – Looked utterly in control throughout practice which made his haphazard qualifying performance all the more baffling. He lined up tenth after crashing in Q3, held his place at the start but then began to pick off his rivals including the fast Williams of Bottas. His progress was then delayed by an engine problem which was solved by a switch change after around 15 laps, though by then he was confined to fifth.

Nico Rosberg – It was Rosberg’s turn to run the harder tyre during practice which he felt disguised his pace on Friday, along with a loss of power in the second session. He came to the fore in qualifying and took an emphatic pole position as Hamilton tripped up. He was never headed in the race and while he was never seriously tested either it’s hard to see what more he could have done.

Sebastian Vettel – Ferrari were not the force they were in Canada. Red Bull and Force India beat them in qualifying, though only very narrowly. Querying Ferrari’s pit call ultimately had no bearing on his finishing position, and its doubtful he could have finished higher than second.

Kimi Raikkonen – Hampered by more reliability problems during practice but took fifth on the grid. In the race his pace compared well with Vettel’s considering his earlier pit stop, but he compromised himself by picking up an unnecessary penalty for crossing the pit entry line.

Felipe Massa – Didn’t click with the circuit as quickly as Bottas did but qualified ahead. Rear tyre degradation was the story of his race, forcing him to make an extra pit stop as he fell to tenth place.

Valtteri Bottas – Flew on Friday but was frustrated on Saturday. A drain cover damaged his car at the start of final practice, confining him to the pits for the rest of the session, and his final qualifying run was compromised when he caught Verstappen at the start of his lap. He crept up the order early on the race but couldn’t keep Hamilton behind him. But unlike his team mate he made a one-stopper work and took a decent sixth.

Daniel Ricciardo – After being the first to hit a barrier on Friday he bounced back on Saturday, grabbing a spot on the front row by matching Vettel’s lap time to within a thousandth of a second but doing so moments before the Ferrari driver, putting him ahead. However Red Bull’s low downforce set-up meant they struggled with their tyres in the race and both drivers had to pit twice, dropping backwards.

Max Verstappen – Was infuriated by Bottas in qualifying as he kept finding the Williams trying to occupy the same piece of track as him. He started well, passing Bottas and Kvyat, then fell foul to the same tyre problems which wrecked his team mate’s race. On his second set he was able to pass Massa and Hulkenberg for eighth behind Ricciardo.

Nico Hulkenberg – Blew his chance of starting at the front when he spun in Q2 and then had a mix-up with his race engineer on the radio which scuppered his attempt to do another lap. He picked up damaged when he was hit by Gutierrez at the start but it was starting the race on the soft tyres which spoiled his day: he was struggling for grip on super-softs by the end and was demoted to ninth by the Red Bulls.

Sergio Perez – Would have started on the front row but a crash during final practice left him with a broken gearbox which had to be replaced, earning a five-place grid penalty. Nonetheless from seventh he gained places from Massa and Kvyat at the start, then took the fight to Raikkonen after delaying his first pit stop, passing the Ferrari on the final lap. Third was great, but clearly second was possible.

Kevin Magnussen – It was an excruciating weekend for Renault as both cars qualified at the back. Magnussen opted to start from the pits so he could change his suspension set-up and the move paid off – he made it up to 11th at one point before the Renault’s lack of speed was exploited by Button, Nasr and Grosjean.

Jolyon Palmer – The only positive to be drawn from qualifying for Paler was that Magnussen’s time indicated there wasn’t much more performed to be found from the car. An error at the first corner at the start cost him a chance of beating his team mate, and he also flat-spotted a set of softs tyres forcing an early pit stop.

Daniil Kvyat – Was able to hold his head up again after a trouble-free run in qualifying earned him a solid sixth on the grid. Unfortunately a suspension failure kept him from delivering on the car’s potential.

Carlos Sainz Jnr – Ran strongly on Friday but after changing his brakes on Saturday he wasn’t as confident in the car and failed to make it into Q3. He had just made his second pit stop and was looking to go on the attack when he also suffered a suspension failure.

Marcus Ericsson – Quick work by the Sauber mechanics between first and second practice to change Ericsson’s engine meant he didn’t lose too much time. He admitted over-driving in qualifying and ended up 20th on the grid. In the race he found his tyres were going off more quickly than expected and had to make two pit stops, and at the flag he had only Haryanto’s Manor behind him.

Felipe Nasr – Got the most out of his car in qualifying and took advantage of Button’s problems to reach Q2. Like Ericsson he had to pit twice but his pace was better and he got past Magnussen’s Renault for 12th.

Fernando Alonso – Didn’t think a place in Q3 was possible but was disappointed to qualify as low as he did after a yellow flag meant he couldn’t use DRS on his last lap. Had it not been for his gearbox problem he would probably have taken 11th but the McLaren wasn’t quick enough for points on Sunday.

Jenson Button – His first qualifying effort went awry when he skidded off at turn 15 and his second was spoiled by traffic. The upshot was he failed to make it beyond Q1. However he started well, moving up to 15th as he passed several rivals on the outside of turn one, and jumped Nasr at the first pit stop to get on Alonso’s tail and ultimately deliver the result his team mate would have had.

Pascal Wehrlein – Wasn’t able to use DRS on his last qualifying effort and started 18th. He tried to make a one-stop strategy work and ran as high as eighth at one point before slipping back. Manor left his first pit stop until after half-distance so he actually regained some places from drivers who were making their second stops before coming in himself. For all that he was down in 19th when his brakes gave up.

Rio Haryanto – Seemed to click with the circuit quickly and did a solid and clean job in qualifying to line up ahead of Wehrlein. However he hit Gutierrez at the start and had to pit for a new wing. His only chance of a competitive finish was to run to the finish on softs, which he did, though inevitably he struggled for pace.

Romain Grosjean – Despite heading down the escape road more than once in qualifying he took 11th on the grid. In the race he pitted earlier than planned for soft tyres due to rear graining on the super-softs, then was forced in again as his power unit temperature was increasing due to rubbish in his radiators. At this point Haas could only put him on mediums as they didn’t have any fresh soft tyres left. He came home 13th after passing Magnussen.

Esteban Gutierrez – Still not back to full strength following his recent illness, Gutierrez visited many of Baku’s run-off areas during practice. He didn’t make a great started and made matters worse by running into Hulkenberg, dropping back to 17th. With a damaged floor and wing Gutierrez had to pit for repairs, which left him behind the Renaults at the flag.