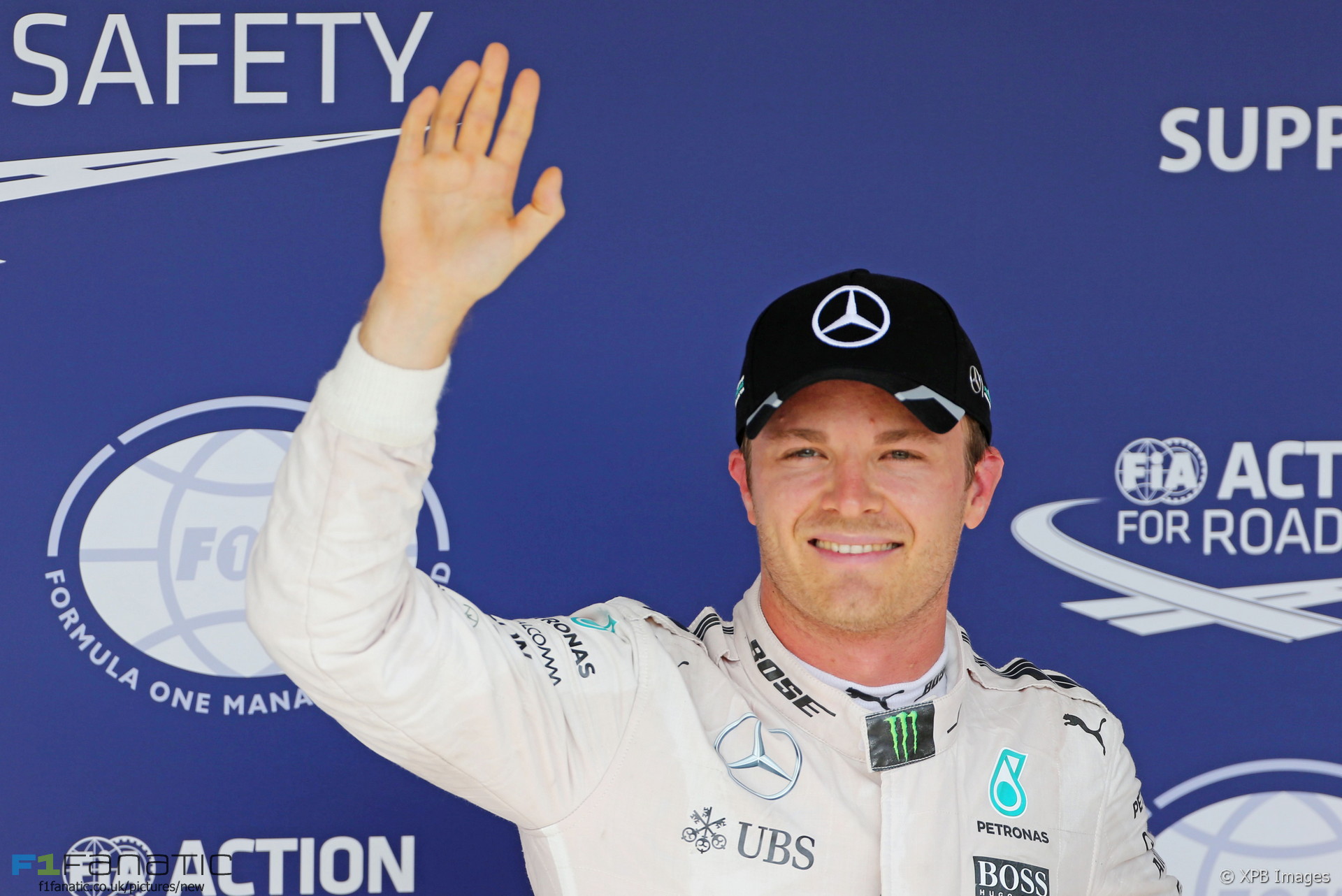 Nico Rosberg will start the Hungarian Grand Prix from pole after an incident-filled qualifying that saw Lewis Hamilton caught out by a yellow flag on his final flying lap.

Hamilton was forced to back off on his personal-best lap to avoid Fernando Alonso’s stricken McLaren, but the obstruction was for Rosberg, allowing him to press on and duly snatch pole by two tenths.

It will be an all-Red Bull second row with Daniel Ricciardo and Max Verstappen lining up behind the Mercedes, while Sebastian Vettel will start fifth.

After three sessions of dry running, a sudden deluge around 30 minutes before the start of qualifying changed everything for the teams. With the Hungaroring soaked, the start of the session was delayed, first for ten, then 20 minutes as the Safety Car toured the sodden surface, kicking up impressive levels of standing water.

When the session eventually began, the track was still extremely wet, with more rain beginning to fall as the lights went green. In the rush to set initial laps, the Force Indias of Sergio Perez and Nico Hulkenberg went fastest. But with the rain falling hard and visibility incredibly limited, the session was stopped due to the monsoonal conditions.

After a brief delay, the cars were back out on track. Times were immediately quicker. The Red Bull duo of Daniel Ricciardo and Max Verstappen went fastest of all, but then the session was stopped yet again when Marcus Ericsson aquaplaned off the circuit at turn ten and into the barriers.

With no further rain having fallen, track conditions finally began to improve as Q1 resumed once more. A number of drivers – both Red Bulls, both Haas drivers, Sebastian Vettel and Felipe Massa – took a gamble to switch to intermediate tyres, but Williams immediately regretted that risk when Massa lost control at the exit of turn five and crashed into the left-hand wall, wrecking his car and bringing out the third red flag stoppage of Q1.

There was no doubt that the track was ready for intermediates when the session resumed for the final time. The Mercedes pair wasted no time in lowering the fastest laptimes of the session, but then Rio Haryanto brought out the red flags for the fourth and final time in Q1 when he spun off in an identical fashion to Ericsson at turn ten.

With no time left for drivers to set a time, the session was made official. This left the two Renaults eliminated, much to the frustration of Jolyon Palmer on team radio. Massa, Ericsson, Werhlein and Haryanto were also eliminated.

Almost an hour after Q1 began, the second session finally got underway. The track was now drying rapidly, but all drivers opted to play safe and stick with the intermediate tyres around the damp circuit.

After the initial runs, Hamilton held the benchmark time with a 1’31.571, with Verstappen only a tenth of a second adrift. Valtteri Bottas was the first driver to take a gamble on dry tyres, switching to super softs with just over half of the session remaining.

Bottas went fastest by almost a second on his first flying lap on the dry compound, triggering the rest of the field to pit for the same. Fernando Alonso briefly went fastest for McLaren as laptimes began to tumble.

The track was continuing to improve rapidly as the chequered flag flew, meaning the advantage was firmly with those drivers who began their final laps at the last possible moment. Rosberg went quickest, but with Hamilton having set his final time, he was now at the mercy of other drivers.

Hulkenberg, Bottas, Sainz and the two McLarens all improved, pushing Kimi Raikkonen’s Ferrari out into the drop zone. But Hamilton held on by the skin of his teeth in tenth, ensuring he had made it through to Q3. This left Romain Grosjean, Daniil Kvyat, Sergio Perez, Raikkonen’s Ferrari, Esteban Gutierrez and Felipe Nasr all eliminated.

McLaren successfully saw both cars through to Q3 for the first time since they switched to Honda power units.

The final shootout for pole position began with a dry racing line, but plenty of puddles and damp patches off line around the Hungaroring.

After the first runs, it was advantage Hamilton whose 1’20.108 put him almost four tenths quicker than team mate Rosberg. Ricciardo was a tenth slower than Rosberg, but almost lost control on the exit of the final corner.

Rosberg and Ricciardo both improved on their next laps, coming within a tenth and two tenths of Hamilton, respectively, but it not enough to usurp the world champion at the top.

With time expired, Hamilton went three tenths quicker than his own best in the first sector, but was forced to back off in turn nine when he came across double-waved yellows after Fernando Alonso spun his McLaren. Alonso car was cleared by the time Rosberg had arrived in the yellow flag area and pushed on to take pole by a tenth of a second, with Hamilton unable to respond.

Daniel Ricciardo took third spot on the grid, ahead of team mate Max Verstappen. Sebastian Vettel will line up fifth, ahead of Carlos Sainz in sixth. The two McLarens of Alonso and Button lock out the fourth row of the grid, while Nico Hulkenberg and Valtteri Bottas round out the top ten.

115 comments on “Rosberg on pole after frantic Hungarian GP qualifying”