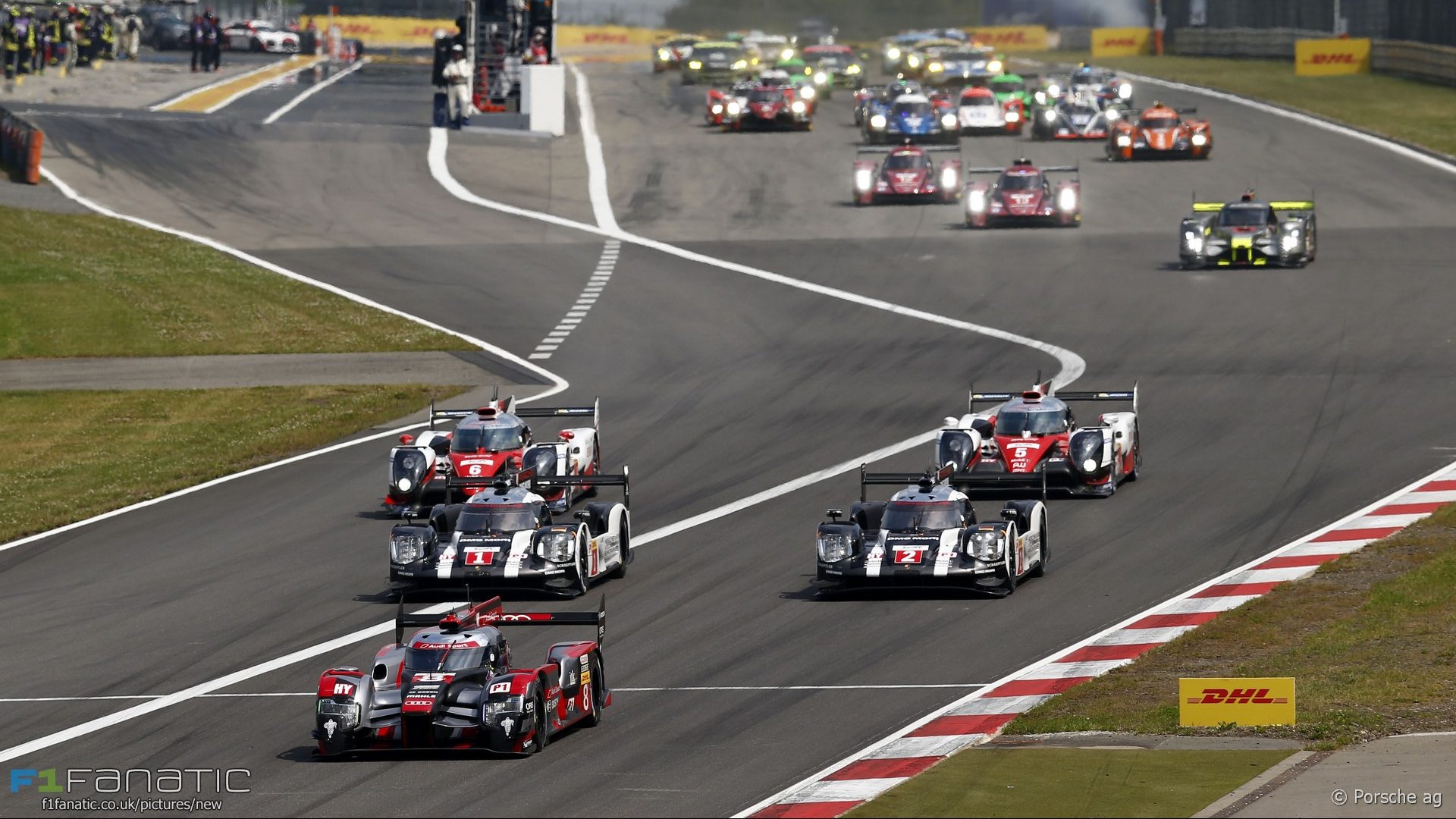 One week ahead of Formula One’s return to Germany the World Endurance Championship resumed at the Nurburgring following the Le Mans 24 Hours.

The number one Porsche of reigning champions Timo Bernhard, Mark Webber and Brendon Hartley took their first win – and points – of the season, making best use of full course yellows and scraps between their rivals behind. Contact with a number of GT rivals cost the number two Porsche and championship leaders however – having to settle for fourth behind the Audi pair. The GT Pro class was won by Gianmaria Bruni and James Calado for Ferrari.

With the Prototype class not competing at Lime Rock, PC was the top class – and championship leaders Alex Popow and Renger van der Zande took the win. In GT Le Mans Tommy Milner and Oliver Gavin won for Corvette, giving them their 100th sports car racing victory and with Jan Magnussen and Antonio Garcia in second, their 60th one-two.

Kyle Busch led almost all the way in the Brickyard 400 and hung on to win despite a string of late-race caution periods including one red flag. Despite concerns over fuel economy the race distance was extended to ensure a green-flag finish.

A pair of second places in the two Queensland races saw Jamie Whincup extend his championship lead. However what would have been his 100th series in the opening race slipped through his fingers in race one when team mate Shane Van Gisbergen passed him on the penultimate lap. Craig Lowndes was third – locking out the podium for Triple Eight.

Whincup was denied once more by a team mate in the second race as this time Lowndes beat him to the flag – equalling Mark Skaife’s record as the most successful Holden driver in history with an 80th victory for the team. Chaz Mostert completed the podium behind Whincup.

Roy Nissany picked up his maiden win in the Formula V8 3.5 series in his second year of competition, and immediately followed it up with another as he swept the Silverstone races – with fastest laps in both. Matthieu Vaxiviere was on top in qualifying but poor starts limited him to second and seventh in the two races. Tom Dillmann scored a pair of fourth places with his championship lead over Nissany now 32 points.

Leonardo Pulcini extended his run of top-two finishes to seven out of seven with a dominant lights-to-flag victory on Saturday ahead of Colton Herta. However the pair came to blows in race two leaving Antoni Ptak to claim his first victory of the year despite strong late-race pressure from Ferdinand Habsburg who closed in as rain fell in the final laps. Pulcini retains a 36-point lead over Habsburg at the halfway point in the championship.

Having ended his victory drought at Silverstone Pierre Gasly followed it up with another win in the GP2 feature race. He headed another one-two for Prema head of Antonio Giovinazzi. The pair now occupy the same spots in the championship following Sergey Sirotkin’s sprint race victory ahead of Racing Engineering pair Jordan King and Norman Nato.

McLaren junior driver Nyck de Vries took his maiden pole in GP3 but was left stranded on the grid as the field started the warm-up lap, allowing Matt Parry to take his maiden win ahead of Antonio Fuoco and Jake Dennis. In race two it was Alexander Albon topping the podium – and now the championship – with Arjun Maini taking his maiden podium in second in just his second round in the series, just ahead of Charles Leclerc.

With the summer break looming this weekend offers your last chance to get a big racing fix for a few weeks. Formula One and its support series are in action once again next weekend as they travel to Hockenheim for the German Grand Prix.

In other open-wheel action IndyCar headd to Mid-Ohio, and the European F3 Series is at Spa. For tin-top fans the BTCC returns after a lengthy summer break with three races at Snetterton and NASCAR rolls on the Pocono Raceway. The World Rally Championship will also put on what is usually one of its most spectacular weekends of the year- the Rally of Finland.