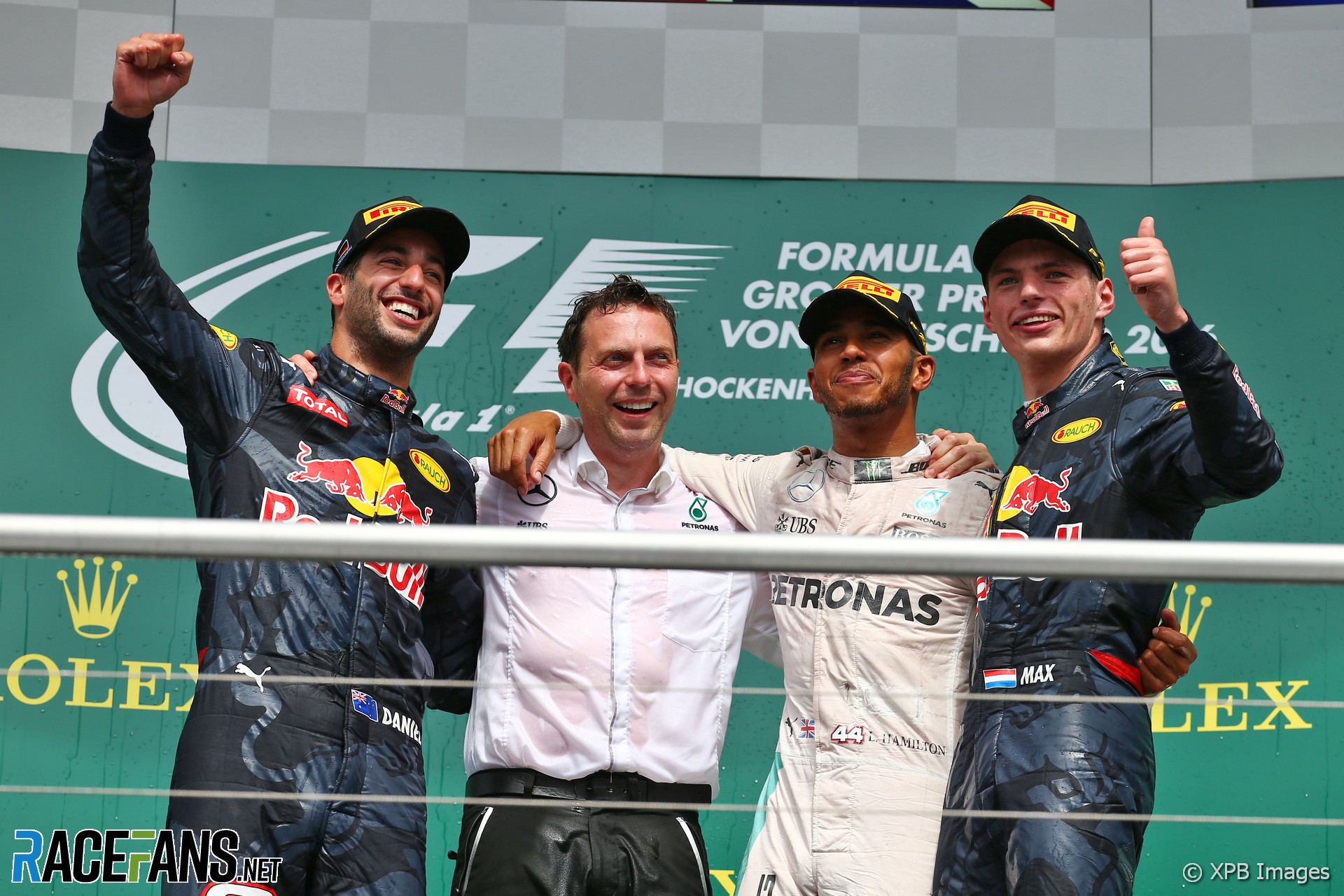 If the German Grand Prix was the final scene before the intermission in the 2016 season, the scriptwriter did a serviceable if unimaginative job of reprising the main themes of the season so far.

Squabbling over rules changes which ultimately make little difference to the on-track action? Yes, there was plenty of that too.

Hamilton’s starts were a significant weakness at the start of the season. But for the second race in a row in Germany he lined up second behind his team mate and immediately fired into the lead.

This was at least as much because Rosberg made a poor start as because Hamilton made a good one, but the championship leader has clearly addressed this particular weakness. “I think the last two races the procedure’s been spot-on, pretty much,” said Hamilton. “Today was definitely the best one I would say.”

The two Red Bulls fell in behind Hamilton, Max Verstappen audaciously navigating around the outside of Daniel Ricciardo at turn one on the exit kerb. Ricciardo found his mirrors full of Rosberg on the run to the Spitzkehre but – unlike in Hungary – he positioned his RB12 perfectly to ensure Rosberg did not retake the place he had just lost.

Behind them the Ferraris, which started from row three, swapped places at the start, Sebastian Vettel getting ahead of Kimi Raikkonen. Valtteri Bottas and Nico Hulkenberg held their positions but the McLaren of Jenson Button appeared behind them having made up three places.

Rosberg made a few more attempts to get by Ricciardo before being reminded by his race engineer to treat his super-soft tyres with care for the opening laps. The teams are now able to listen in on all of their rivals’ radio messages, and Verstappen’s engineer soon told his driver Hamilton had been given the same instruction.

Hamilton stretched his lead as the first round of pit stops approached, leaving Verstappen behind at well over half a second per lap. But the three second gap covering Verstappen, Ricciardo and Rosberg meant Mercedes had a strong chance of recovering at least one place by bringing their driver in early.

Sure enough Rosberg followed Verstappen into the pits on lap 11. Ricciardo had to stay out, but his chances of keeping his position improved when a slow left-rear tyre change for Rosberg cost the Mercedes around a second. Rosberg’s plight worsened when he came out of the pits behind both McLarens.

Red Bull wasted no time bringing Ricciardo in to secure his position ahead of Rosberg. They also covered their strategic options: with Verstappen and Rosberg both on super-softs, Ricciardo switched to the longer-lasting soft tyres.

Hamilton had the luxury of being able to wait until lap 14 to make his first pit stop. He rejoined with a six-second lead which he continued to gradually extend, particularly when Verstappen’s super-soft tyres began to go off.

Mercedes anticipated Verstappen’s troubles well and had Rosberg in the pits on lap 27 to gain the benefit of the undercut. While Verstappen’s in-lap was quick, his previous tour was not, and the result was Rosberg was right on his tail as lap 30 began.

With the Mercedes at full song and DRS on the approach to the Spitzkehre, Rosberg was gaining on Verstappen quicker than the Red Bull driver appeared to realise. Rosberg dived for the inside at the last moment – and Verstappen jinked towards him in defence even later than that.

What followed looked like an action replay of the last lap in Austria, with Verstappen in the role of Hamilton and Rosberg committing much the same offence for much the same outcome. Despite later insisting he had been “on full lock” it was clear from the replays he waited a long time before turning in at all, obliging Verstappen to take to the run-off as he claimed the position. The stewards handed Rosberg a five-second time penalty and endorsed his licence.

Ricciardo ran until lap 34 on his soft tyres. While Verstappen hadn’t enjoyed the super-soft rubber early in the race Ricciardo preferred it. “The super-soft worked a lot better,” he said, “I was happier with that tyre the last two stints.”

After switching back to the softer rubber Ricciardo was immediately a second per lap faster than Verstappen. Red Bull, knowing Rosberg’s penalty meant they had a chance to get both cars home in front of him, made sure Verstappen didn’t hold Ricciardo up.

“Once I caught Max I had the DRS but he made life easy for me,” Ricciardo confirmed. “That was, let’s say, a good little bit of teamwork for us.”

Rosberg again initiated the final round of pit stops when he came in on lap 44. However he would have to wait before being furnished with four new tyres – and not just because of his five-second time penalty. Mercedes mis-timed how long they needed to hold the car in the box, costing Rosberg another four seconds.

For the final stint Rosberg had a set of the soft tyres – which had been widely expected to be the better tyre for the race – while both Red Bull drivers had to run at least 21 laps on the super-soft tyres. However Ricciardo continued to find good performance from the softer rubber, and though Verstappen’s lap times began to drop off towards the end of the race it wasn’t enough for Rosberg to mount an attack.

Most teams quickly gravitated towards three-stop strategies in the race and those who stuck with two-stoppers largely regretted it. First among those was Bottas, was who passed by Hulkenberg and Button during his final stint. The Force India driver therefore followed the Ferraris home – Raikkonen confined to sixth after a slow first pit stop.

Fernando Alonso was on course for the final point with four laps to go before a pressing need to save fuel allowed Sergio Perez and Esteban Gutierrez through. The Haas driver was the only one to start the race on the soft tyres which allowed him to be one of the more successful of the two-stop runners.

His team mate Romain Grosjean came 13th after being forced to slow with a braking problem mid-way through the race. He was followed by the Toro Rosso pair, Carlos Sainz Jnr another driver who lost time in the pits.

It was a race of what might have been for Renault. Jolyon Palmer made a slightly too aggressive start and made contact with Felipe Massa – the Williams driver later retiring. Kevin Magnussen was another driver who lost out after trying to run a two-stop strategy. The two yellow cars were separated at the flag by Pascal Wehrlein and Marcus Ericsson, while Rio Haryanto brought up the rear.

Eight days ago Rosberg was leading the championship. He now lies 19 points off the lead after what he described as an “absolutely crap day, crap race”.

For Hamilton, after a troubled start to the year he enters the summer break with a fourth world championship title looking increasingly likely. The lack of pressure from behind even allowed him to protect his diminished supply of power units.

“Generally I was looking after the engine up front and never felt like I was under threat,” Hamilton admitted.

“Hopefully I’ve saved enough of my engine today hoping that I would be able to use it at the next race. It will either be the next race or Monza, because I’m going to run out of engines soon.”

That penalty may be inevitable, but Hamilton’s bonus haul of points today will put him in a stronger position when it finally comes.

35 comments on “Hamilton makes hay on “crap day” for Rosberg”