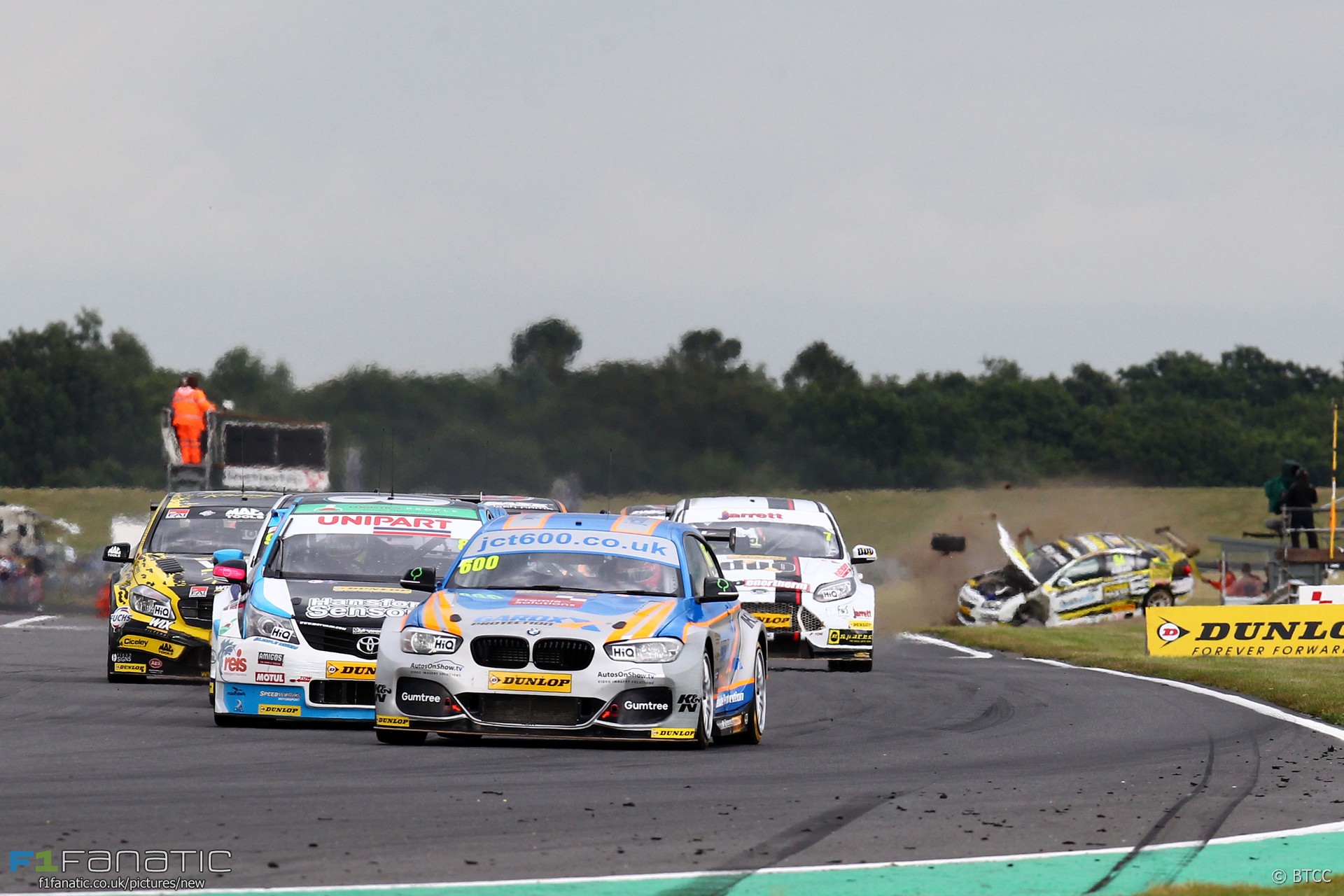 A cameraman had a lucky escape at the start of a British Touring Car Championship race at Snetterton yesterday when a car cartwheeled over the barriers and knocked over the platform he was stood on.

It was an eventful weekend for the BTCC as two of their three races were red-flagged due to crashes.

Elsewhere the Spa-Francorchamps weather stayed true to form for the Spa 24 Hours and European Formula Three support races. There was rain at Pocono too, meaning NASCAR’s race had to be postponed until later today. Better conditions greeted IndyCar at Mid-Ohio and the World Rally Championship in Finland.

Reigning champion Gordon Shedden took his first pole for three years as the BTCC returned to action following a six-week break. However Colin Turkington muscled him aside in race one and took his third victory of the season. Mat Jackson completed the podium as front-left punctures struck three competitors at the demanding Snetterton track.

The carnage began in race two (first video). Jackson fired past Shedden and Turkington on the opening lap, but mayhem ensured on the Bentley Straight as Dan Welch and Ollie Jackson tangled, spun in front of the pack and triggered multiple crashes as oncoming cars were blinded by dust.

With debris littering the circuit the race was stopped. This was bad news for Jackson whose hard work had been undone, but he impressively repeated his passes to take the lead when the action resumed.

More drama awaiting at the beginning of race three. Alex Martin and Mark Howard tangled at the start leaving Hunter Abbott with nowhere to go. The Chevrolet Cruze was launched into a camera platform which collapsed, taking the poor camera operator with it. Fortunately all were unhurt, but another lengthy red flag meant another truncated race.

Pole sitter and championship leader Sam Tordoff’s car broke down before the restart could take place, leaving Tom Ingram to lead the field. However a poor start handed the lead to Jason Plato, who in turn was soon dispatched by Rob Collard. Shedden was on the attack, however, and after hauling in Collard made a last-lap lunge to claim a much-deserved win. Collard nonetheless took the championship lead, while Rob Austin finished a popular third.

Dire conditions in race one on Friday saw a lengthy Safety Car period after which Lance Stroll converted pole position into his seventh win of the year. Max Gunther and Ben Barnicoat followed behind in thick spray.

In a far more temperate conditions on Saturday, George Russell took victory in race two after a short battle with Joel Eriksson before running away to a seven second lead. Mikkel Jensen finished off the podium, while Gunther could only manage seventh in a race where Stroll failed to score. A notable performance from Anthoine Hubert meant he took an impressive fourth place.

In the final race it was Eriksson’s time to shine, taking his first win in Formula Three ahead of Russell. The Hitech driver had started from pole position again but got away slowly and had to fight back through the field to salvage third behind Hubert. He passed Stroll on the way, but the Williams junior driver retains a 61-point championship lead with nine races remaining.

The World Rally Championship’s rows over running order show no signs of going away. Kris Meeke took his second victory of the season at the Rally Finland – albeit once more aided by an advantageous road position – with team mate Craig Breen who was also running low down the order, joining Meeke on the podium in third. In between the two Citroen’s was the usual sight of a VW, but this was the one driven by Jari-Matti Latvala as champion Sebastien Ogier finished just twenty-fourth after losing sixteen minutes on day one by getting stuck in a ditch.

As usual, Finland was far from incident free. Yazeed Al Rajhi achieved the impressive feat of completing a stage upside down (above left) while Lorenzo Bertelli was a spectacular victim of the famous Ouninpohja stage on Saturday morning, with Eric Camili joining him on the sidelines one stage later (above right). It was also a rollercoaster rally for Ott Tanak – who was so cruelly robbed of a win last time out. Fighting for the lead with Meeke on Friday morning, a spin and damage lost him fifty seconds, while a puncture in the afternoon cost him another half a minute. He fought back to bring himself into podium contention on the final day, only to crash out with two stages to run (below).

Simon Pagenaud extended his championship lead with another victory in 2016, though Will Power was hot on his heels in second to minimise the damage. The two team mates had minor contact at a restart following a caution period, but neither suffered damage and both stated after the race they felt it was hard but fair racing.

Behind them though, it rather fell apart for the other title contenders. Scott Dixon and Helio Castroneves collided on lap 15 – breaking the former’s suspension – while Josef Newgarden suffered damage to his rear guard and was forced to pit for repairs, losing a lap. Conor Daly led as the race entered its final stages, but was forced to ‘splash and dash’ with eight laps to go, eventually finishing sixth.

In a race that needed to be seen to be believed, the number 99 ROWE Racing BMW of Maxime Martin, Alexander Sims and Philipp Eng took victory in a race filled with incident, controversy, intrigue, overtaking and Spa’ usual dramatic changes in weather.

Before the race even began Mercedes cars caused controversy by being excluded from qualifying due to a technical infringement regarding their ECU. That meant the cars which locked out top six places were all sent to the back of the top 20 superpole grid and handed five-minute penalties for the race.

A day of racing at Spa saw 15 full course yellows, three safety cars and two periods of heavy rain. The second downpour arrived half an hour before the end and caused chaos at the bus stop chicane where five cars crashed in the space of a minute.

Pro-Am honours went to the IMSA Performance Porsche 911 of Patrick Pilet, Maxime Jousse, Thierry Comac and Raymond Narac, while the Am Cup was won by the Kessel Racing Ferrari 458 of Marco Zanuttini, Vadim Gitlin, Liam Talbot and Nicola Cadei.

Lewis Hamilton won his fourth consecutive grand prix, ahead of Daniel Ricciardo and Max Verstappen after a poor getaway for Nico Rosberg, and now leads his team mate by 19 points heading into the summer break.

Sergey Sirotkin took the GP2 feature race win from pole position despite being forced to make a second pit stop after his first was discounted due to it taking place under the virtual safety car. Pierre Gasly made an atrocious start from second on the grid before fighting his way back to third behind Luca Ghiotto, only to be disqualified for having an empty fire extinguisher on board after it went off mid-race. That promoted Raffaele Marciello to the final podium spot. The second Prema car of Antonio Giovinazzi got an equally as poor start from reverse grid pole in the sprint race, handing Alex Lynn an easy lead which he converted to victory ahead of Sirotkin and Arthur Pic.

In GP3, Ferrari junior Antonio Fuoco made great use of a virtual safety car restart to jump from third to first, and held on until the end to win ahead of McLaren junior Nyck de Vries and Matt Parry. The virtual safety car was again the decider in race two as Jake Hughes – who had lost the lead from pole – passed Arjun Maini for the lead following a collision that eliminated championship leader Alexander Albon. Jack Aitken finished second while Charles Leclerc took third to steal the lead of the championship from Albon.

It’s the summer break for Formula One now, and a variety of other European series, so we’ll turn are attention to the Americas next weekend.

The World Touring Cars head to Argentina while the World Rallycross Championship is in Canada and both IMSA and NASCAR are in action too.