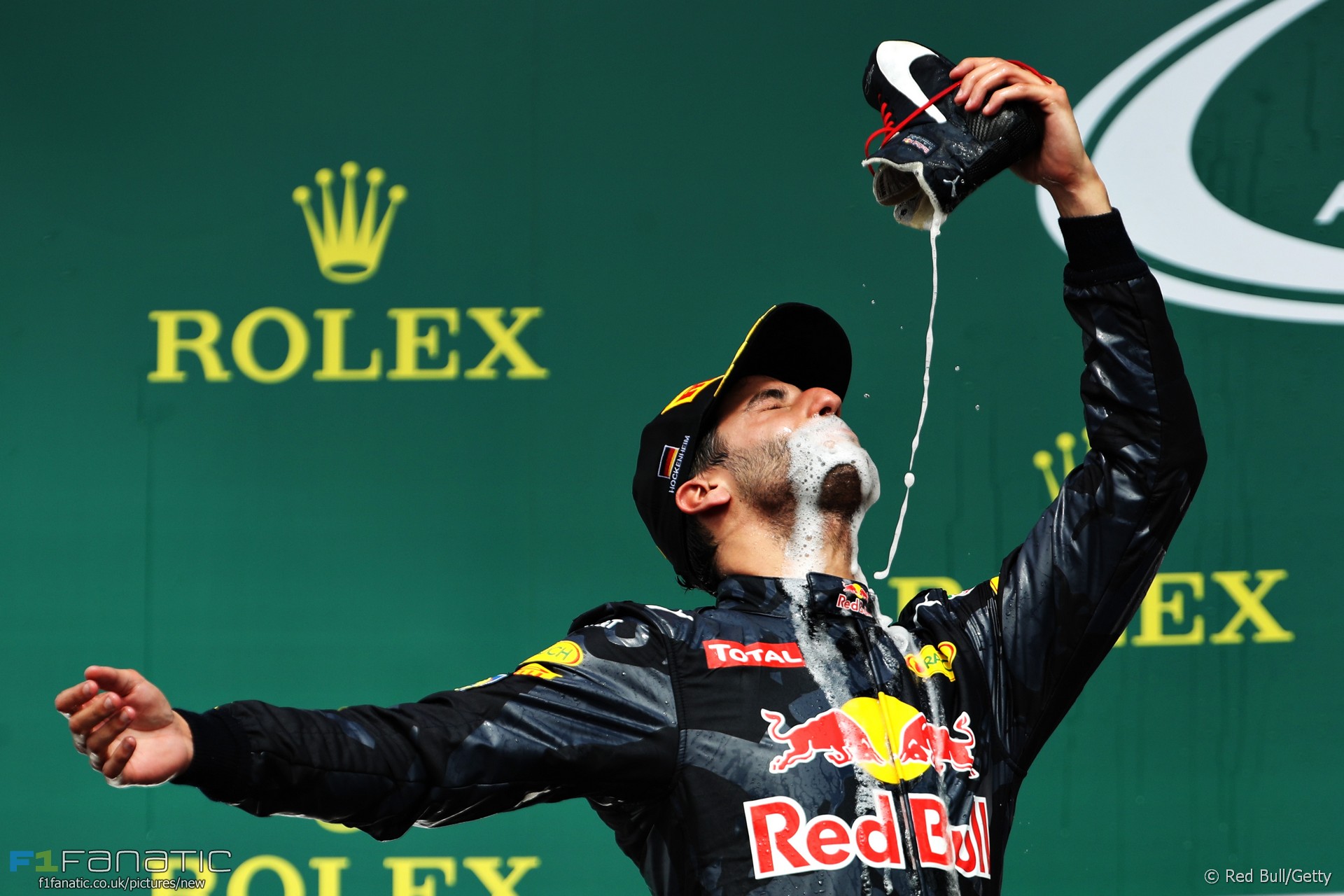 Daniel Ricciardo was voted Driver of the Weekend for the third time this year after finishing second in the German Grand Prix.

He is the first driver to win Driver of the Weekend three times this year, having previously won the Chinese and Monaco polls.

Ricciardo was within a tenth of a second of the Mercedes drivers in final practice but this gap appeared to flatter the Red Bull a little. Sure enough the silver cars pulled further ahead in qualifying, but Ricciardo nonetheless lined up ‘best of the rest’ ahead of his team mate.

He was surprised at the first corner, however, as Max Verstappen exploited the full width of the kerb to pass Ricciardo on the outside. The pair had already moved ahead of Nico Rosberg, who Ricciardo firmly kept behind on the first lap.

Ricciardo took advantage of a slow first pit stop for Rosberg to stay ahead of the Mercedes despite pitting one lap after it. He diverged on strategy from Rosberg and Verstappen at this point, and as the pair delayed each other with their scrap Ricciardo strengthened his hand.

He was aided by Verstappen following an instruction from the team not to hold Ricciardo up, though Riccairdo also superior pace on the softer tyres. The result was a second place which equalled his best result of the season so far. He celebrated in unorthodox fashion by drinking champagne from his racing boot.

Did the job in qualifying and the race, those series of laps on the super-soft tyres were mesmerising. Rosberg had to pit otherwise he was a sitting duck. To finish six seconds behind a Mercedes (engine turned down or not) is an achievement.

Also with Verstappen ‘outscoring’ Ricciardo since his arrival I think this was a much needed result on a Sunday. Oh and drinking out of his shoe deserves a notable mention as well.
Blazz

Jenson Button may have only finished eighth but he grabbed the second-largest share of your votes:

Great driving on a great strategy, plenty of overtakes, and was better than his teammate. Plus he gained the most places this race, to earn valuable points that helped reduce the gap to Toro Rosso in the standings.
@Mostcool

Race winner Lewis Hamilton also earned praise from many of you:

Did a good (albeit not fantastic) job in qualifying, had a decent start and cruised to the end without any big mistake. Solid, but not brilliant.
@GuilhermeZahn

And while Carlos Sainz Jnr did not add to his points tally at the last race weekend, several of you nonetheless singled him out for praise:

Sainz has been impressing me weekend in weekend out. Again today he did so with the machinery he has at his disposal (remember, a year-old Ferrari engine) after out-qualifying his teammate by more than half a second.

He raced Massa hard and did not run into his rear when he drove very slow through the hairpin, eventually overtook him like he’s been driving these cars for years. The points gap between him and Kvyat has steadily increased and though it did not today he again finished ahead in what was arguably the best position the Toro Rosso could manage on a track where aero plays little part.
PorscheF1 (@xtwl)

2016 Driver of the Weekend winners