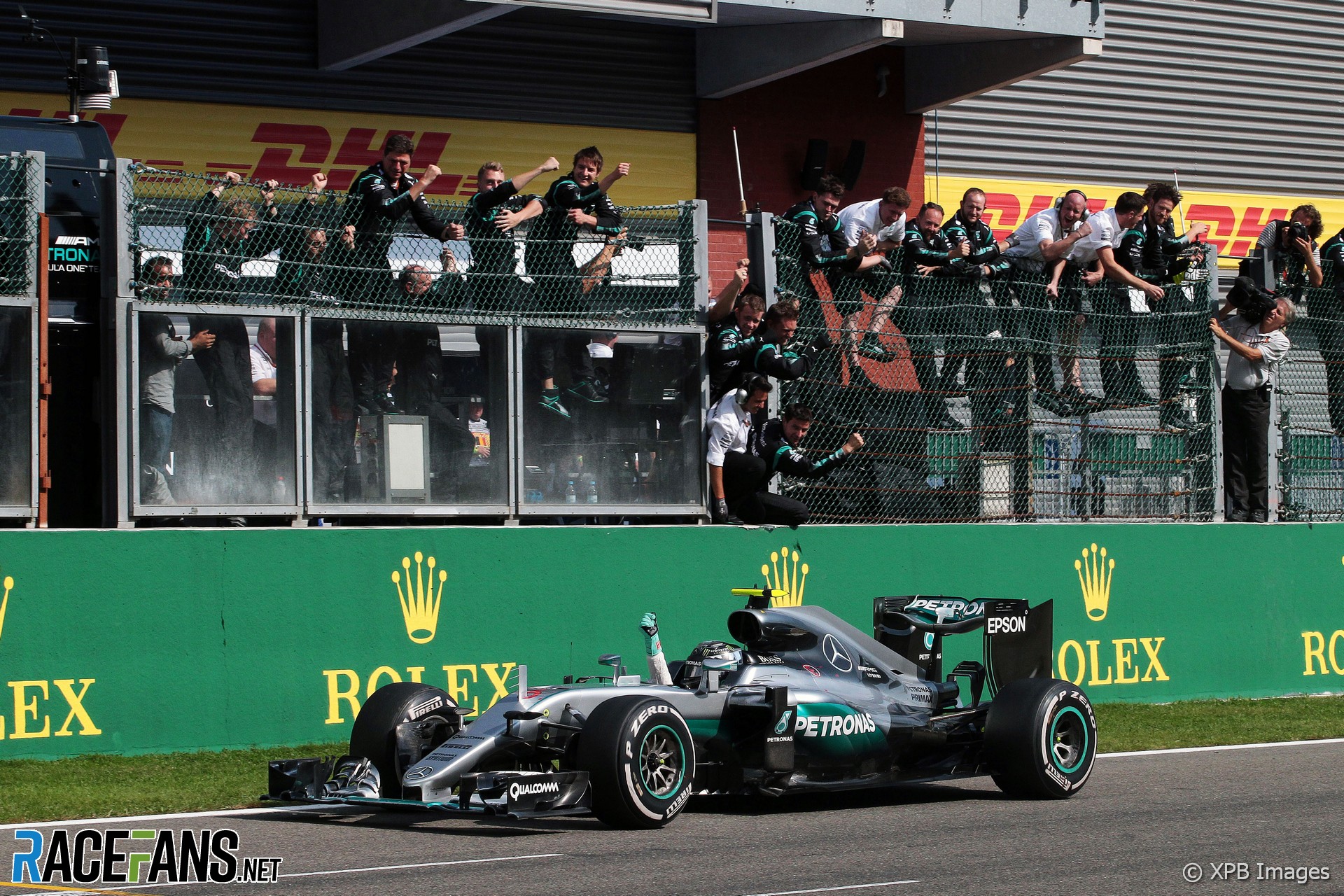 The traditional calm of the long summer break ended was shattered by one of the most frantic and eventful Formula One races of the season so far.

Whatever the reason, a circuit which is famed for wet weather drama managed to provide one of the most enthralling race weekends of the 2016 season without a single drop of rain falling.

Long before the lights went out, the biggest story of the weekend had already unfolded with Mercedes opting to deliberately incur a 55-place grid penalty for championship leader Lewis Hamilton. This turned the negative of Hamilton’s shortage of power units parts into a useful surplus for the remaining races, one which could give him a useful advantage over his team mate.

Not only did this highlight the impossible logistics of such a penalty and re-stoke debate over whether the current power unit regulations are fit for purpose, it also meant that the sizeable Spa crowd knew they were in for a cracking race.

With Hamilton doomed to a last-row start there was a unique sense of anticipation before the race. Nico Rosberg shared the front row with Max Verstappen alongside and the two rapid Ferraris poised to pounce. And with tyre degradation high thanks to the distinctly un-Spa like temperatures everything suggested that this could be the most open race of the season.

Unfortunately hopes of such a tight contest were dashed seconds after the lights went out. Despite his best-ever grid position and a super-soft tyre advantage over his immediate rivals, Verstappen failed to get a strong getaway and was soon engulfed by both Ferraris.

Verstappen tried to redeem his poor start by placing his Red Bull to the extreme inside of Raikkonen’s Ferrari on the run to La Source. At the same time Sebastian Vettel was trying to sweep around his team mate on the outside. The result was a three-car tangle which all but ended the question of whether Rosberg would face any serious opposition.

Vettel blamed Verstappen. Verstappen blamed the Ferraris. The stewards didn’t get involved. Vettel was now facing the wrong way and rapidly dropping positions as Raikkonen and Verstappen had taken bites out of each other’s front wing.

With both Verstappen and Raikkonen now nursing damaged cars, it was inevitable they would be swallowed up by the chasing pack. In the melee that followed, Nico Hulkenberg inherited second place as Verstappen struggled to stay on circuit. Further back, Jenson Button was rammed by Pascal Wehrlein’s Manor, putting an early end to both their races.

At the end of lap one, a bemused Rosberg found himself minding his own business out front as his three strongest challengers pitted for repairs having successfully orchestrated their own downfall in the most convenient way possible for the Mercedes driver.

Having struggled all weekend with a significant power-deficit to their rivals, Toro Rosso’s difficult weekend went from bad to worse on the second lap when Carlos Sainz Jnr’s right-rear wheel erupted along the Kemmel Straight. Despite spinning off the circuit at Les Combes, Sainz inexplicably opted to attempt the five kilometre journey back to the pits on three wheels, but managed only to tear apart his rear wing before pulling off for good the following corner.

The Virtual Safety Car was deployed so the debris could be cleared. Soon after the race resumed with the two Nicos out front, with Daniel Ricciardo, Valtteri Bottas, Sergio Perez and Romain Grosjean’s Haas in a surprise sixth. But when the race restarted on lap five it wasn’t long before the chaos of the opening laps also resumed.

At around 300kph, Kevin Magnussen suddenly lost control at the top of Raidillon, spinning his Renault around and sending the Dane backwards into the barriers at sickening speeds, destroying his car and even knocking his headrest clean off the chassis in the impact.

It was one of the most frightening high-speed accidents of recent seasons and a stark reminder of just how difficult it can still be to finely balance a modern Formula One car on the limit. Magnussen was thankfully able to climb from the car unaided and alert, but was later taken to a nearby hospital for precautionary checks on a cut to his left ankle.

The Safety Car was instantly summoned, causing many through the field to react immediately and pit for fresh tyres. Hulkenberg, Massa, Perez, Grosjean, Vettel and Verstappen were just some who took advantage of the safety car to pit, while Rosberg, Ricciardo, Valtteri Bottas, Fernando Alonso and Hamilton opted to stay out and keep track position.

They profited when the race had to be red-flagged so the damage caused by the Renault could be repaired. With drivers still allowed to change tyres during the stoppage – a rule which may change next year – those who stayed out won a free pit stop.

Alonso and Hamilton now found themselves in legitimate – albeit incredibly fortuitous – top five positions, with Vettel just outside the points in 11th despite the drama of the opening lap.

Once the barrier was repaired the race restarted at the beginning of lap 11. Rosberg led from Ricciardo, Hulkenberg, Alonso and Hamilton, although it did not take long for the championship leader to dispatch his former team mate with a significant top speed advantage.

Further back, Verstappen and Raikkonen had not had enough of each other for one day and found themselves squabbling, quite literally, over 14th place.

With Raikkonen within DRS range of the Red Bull down the Kemmel Straight, the Ferrari driver tried to take the outside line into Les Combes but found the little space that existed there disappear entirely after Verstappen slipped wide, pushing him into the escape road.

The next time by and the Ferrari moved to take the inside line instead, but was forced to back off after a late defensive move by Verstappen which almost saw the two collide for the second time in the race.

Raikkonen was livid with what he called “ridiculous” driving by his rival. “He’s just turning when I’m going full speed on the right” Raikkonen fumed on the radio, but again the stewards took no interest.

Sergio Perez experienced similar difficulties in passing the 18-year-old, suffering the same fate as Raikkonen after he too tried to make an outside pass stick into Les Combes. Then Sebastian Vettel had to contend with the feisty Red Bull driver when the pair fought over eighth, with Verstappen re-passing the Ferrari almost immediately after being overtaken him to frustrate Vettel’s recovery through the field, before finally being dispatched the following lap.

But for all his elbows-out driving, Verstappen failed to convert his best starting position to date into a strong finishing position.

Hamilton makes his way to the podium

Someone who did capitalise the opportunities available was Hamilton, who had now found himself in fourth place between the two Force Indias after pitting for mediums during the final round of pit stops.

Hamilton was not convinced of the strategy at first, questioning whether the team had made the right call over radio, but the Mercedes driver’s concerns were soon put to rest when Hamilton passed Hulkenberg to take the final place on the podium.

Although it now appeared at this stage as though he would once again miss out on a first career podium, due at least in part to pitting before the red flag came out, Hulkenberg and the Force India team emerged as one of the big winners of the weekend.

After showing strong pace throughout the weekend, the team converted their potential into points, with Hulkenberg’s fourth and Perez’s fifth moved them into fourth in the constructors’ championship ahead of a Williams team who had struggled over the course of the afternoon.

It was, of course, not the first time that Force India had enjoyed strong performance at Spa. But to have outperformed their rivals around a high power circuit that has often been Williams’ strong suit bodes well for the team’s prospects for the remainder of the season – not least of which for next weekend in Monza.

And with Monza such a crucial race for Ferrari, it appeared as though Vettel was fighting hard to save face for the team ahead of their home grand prix as he continued to battle his way through the field in Spa.

Vettel passed Verstappen (twice), Massa (twice) and Alonso on his way to holding sixth position as the chequered flag flew. After a similarly eventful race, Raikkonen split the two Williams in the closing stages to take ninth. It had been an immensely frustrating afternoon for the Scuderia, but given how dire Vettel’s prospects had looked after turn one, it could well have been worse.

Not for the first time in his career or even this season, Rosberg cruised to take a comfortable win while all of the attention and intrigue occurred behind him. There had been no Hamilton to pressure him and no late-race mechanical scare to nurse home, but although the win had moved him to within ten points of his team mate, you could forgive Rosberg for hoping he might not have had to share the podium with his team mate at least for this weekend.

Daniel Ricciardo enjoyed a similarly invisible race to his third successive podium in what is quickly becoming a habit for the Red Bull driver. Further down the points, Fernando Alonso was also buoyed by his seventh place finish – a result he later described as having been “unthinkable” just a handful of months before.

After the pre-race anticipation Ferrari and Red Bull would take the fight to Mercedes, having both silver cars on the podium was a great reward for the champions and a squandered chance for their rivals.

But perhaps the biggest winners of the weekend were the race organisers. They had already reported the strongest ticket sales for 15 years before the race began thanks to the popularity of Verstappen. And if Belgian ace Stoffel Vandoorne gets a race seat next year, the future for one of Formula One’s greatest circuits may be very bright indeed.

13 comments on “Rosberg wins as Mercedes’ rivals blow another chance”