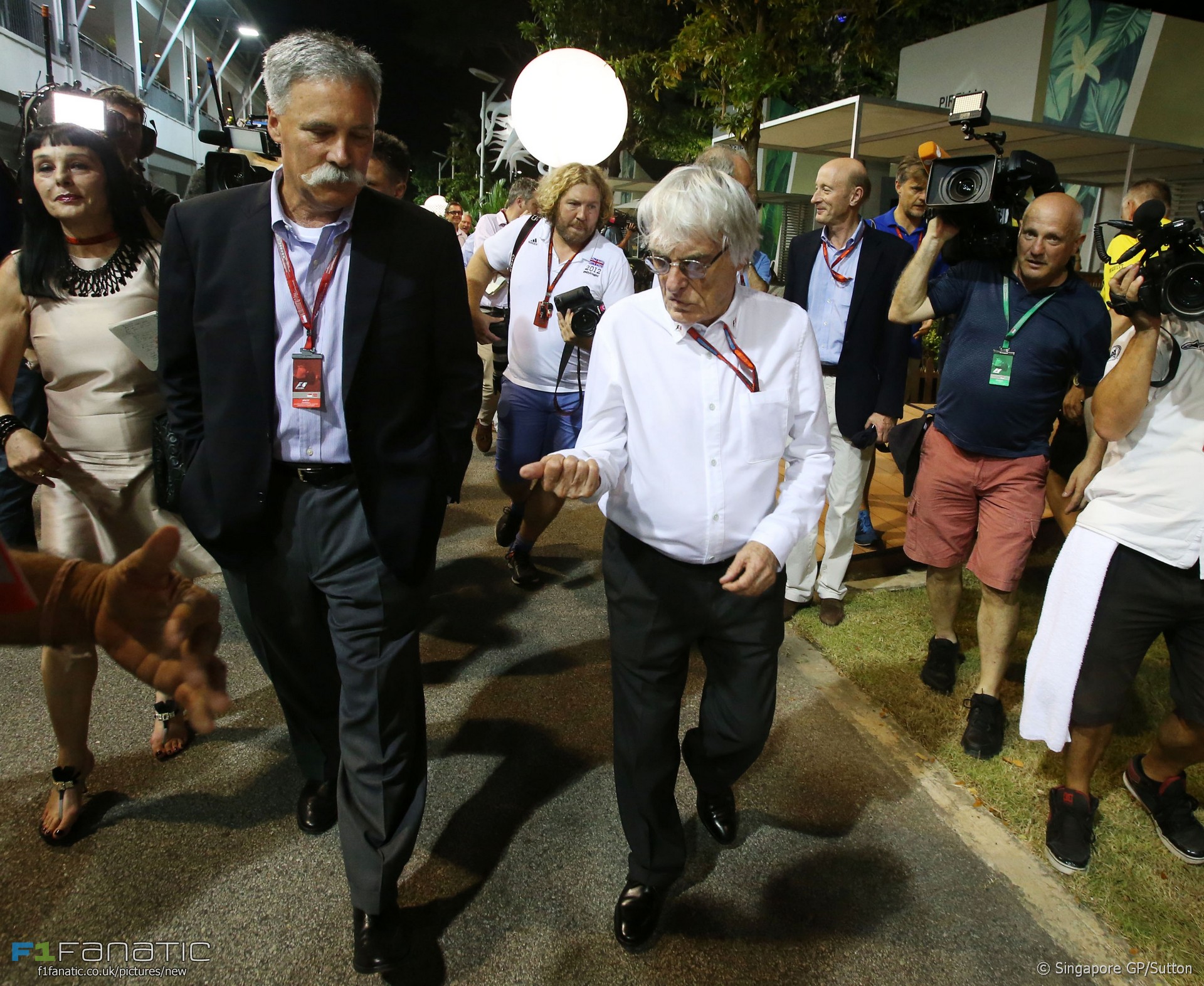 In the round-up: Chase Carey says that Formula 1 can no longer be run like a dictatorship.

"Sure, that is not a task for a committee, as committees tend to become bureaucratic – but there also can’t be a dictatorship – even if probably here they are used to it"

FIA: Procedures not followed when marshal was on Singapore GP track (Autosport)

"But it has emerged the marshal was instructed by a circuit official to head out onto the track after that final call was made and when the cars were approaching."

Lewis Hamilton is on the back foot in the title race, says Martin Brundle (Sky)

"He (Hamilton) didn't have the pace we sometimes see he has in a straight fight, which makes me think he hasn't got quite enough there at the moment."

"Our statistical tool told us that we would still have seven seconds when pitting – and then in two to three laps Daniel was going 3.5 seconds faster and the algorithm showed 'no gap any more'. That was some kind of wake-up call."

Verstappen: Team knew in advance start would be 'difficult' (Motorsport.com)

"Last night they discovered that the clutch wouldn’t bite well, but they weren’t allowed to change anything by the FIA because it wasn’t a structural problem and I was able to race with it."

"Maurizio Arrivabene, the boss of the Ferrari formula one team, spent six hours in custody in Singapore after discarding a cigarette on the street, according to reports in various media."

Voted @alo_oficial Driver of the Day on the BBC podcast. 7th behind 2 x Merc, Ferrari, RBR? Epic for a car whose long run pace was poor #F1

@f1fanatic_co_uk Cannot unsee what I did from the grandstand over looking Turn 1. Was utterly appalling and feared the worst.

Not too warm, not too tired, feeling fresh after the #SingaporeGP #Banter This one really hurts, so gutted for the boys. They worked so hard

Best thing about @SkySportsF1 is you don't have to see the pictures… the commentators give a commentary for the blind! #f1 #SingaporeGP

Was the Singapore Grand Prix a classic, or a bore? @dbradock certainly enjoyed it from the stands…

Just got back to our hotel from the race.

Loved it. The strategy battle between the front runners and the build up of tension during the second half in particular had the entire crowd on the edge of our seats.

The driving was amazing this year.. Other than the first lap, I don’t recall any of them driving wildly off the track or any yellow flags for that matter.

Brilliant day, brilliant race. Pity Dan couldn’t run Nico down but way closer than we’ve seen for a while.
@dbradock

Happy birthday to Robk23 and Patrick!